Challenges to Globalization: Analyzing the Economics 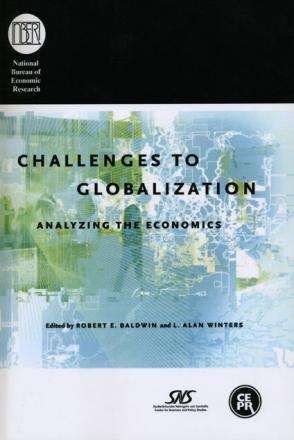 People passionately disagree about the nature of the globalization process. The failure of both the 1999 and 2003 World Trade Organization’s (WTO) ministerial conferences in Seattle and Cancun, respectively, have highlighted the tensions among official, international organizations like the WTO, the International Monetary Fund (IMF), the World Bank, nongovernmental and private sector organizations, and some developing country governments. These tensions are commonly attributed to longstanding disagreements over such issues as labor rights, environmental standards, and tariff-cutting rules. In addition, developing countries are increasingly resentful of the burdens of adjustment placed on them that they argue are not matched by commensurate commitments from developed countries.
Challenges to Globalization evaluates the arguments of pro-globalists and anti-globalists regarding issues such as globalization’s relationship to democracy, its impact on the environment and on labor markets including the brain drain, sweat shop labor, wage levels, and changes in production processes, and the associated expansion of trade and its effects on prices. Baldwin, Winters, and the contributors to this volume look at multinational firms, foreign investment, and mergers and acquisitions and present surprising findings that often run counter to the claim that multinational firms primarily seek countries with low wage labor. The book closes with papers on financial opening and on the relationship between international economic policies and national economic growth rates.