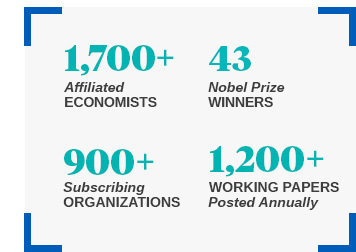 The National Bureau of Economic Research (NBER) is a private, nonpartisan organization that facilitates cutting-edge investigation and analysis of major economic issues. It disseminates research findings to academics, public and private-sector decision-makers, and the public by posting more than 1,200 working papers and convening more than 120 scholarly conferences, each year.

Headquartered in Cambridge, Massachusetts, the NBER is a network of nearly 1,700+ economists who hold primary appointments at North American colleges and universities. These researchers are leaders in the field: Forty-three current or former NBER affiliates have been awarded the Nobel Prize in Economic Sciences, and 13 have chaired the President’s Council of Economic Advisers.

The NBER is supported by grants from government agencies and private foundations, contributions from corporations and individuals, subscription revenue, and portfolio income.

NBER researchers are organized into 20 research programs, each led by a director or co-directors. Researchers in each program meet several times a year to share and discuss their latest findings. The largest NBER meeting is the Summer Institute, a three-week gathering each July that attracts more than 2,700 researchers, most of whom are not affiliated with the NBER.

New research findings by affiliated researchers are circulated for discussion and comment through the NBER working paper series. Roughly 25 new papers are posted each week. These papers, which have not been peer-reviewed, report both empirical and theoretical findings; they may not contain policy recommendations. Working paper authors must disclose any financial or other interests that might bear on their research.

Non-technical summaries of six recent working papers appear monthly in The Digest; longer descriptions of research in specific programs, or carried out by particular researchers, are presented in the quarterly NBER Reporter. The Digest, Reporter, and the full text of all working papers outside an 18-month rolling paywall — currently more than 28,000 papers — are open access. More recent papers are available by institutional subscriptions to colleges, universities, and corporations; they are available at no charge to government employees, journalists, and residents of low-income nations.

NBER affiliates are elected in a highly competitive process. Nominations of outstanding scholars who hold primary academic affiliations at North American colleges or universities, and who can contribute to NBER activities, are reviewed annually by program directors and leading scholars in each program area. Tenured researchers are considered for appointment as Research Associates, untenured scholars for appointment as Faculty Research Fellows. In recent years, about 60 new affiliates have been selected annually from a pool of more than 300 nominees.

The NBER supports the conduct of economic research by administering research grants that affiliated researchers receive from government and private funders, by convening research projects on emerging economic issues, by publishing books with the findings of some of these projects, and by maintaining an archive of data sets that are used in economic research.

The NBER was founded in 1920 in New York City. Its board of directors includes representatives of research universities, professional associations related to economics, and leaders from the business and labor communities. The president and chief executive officer, MIT economics professor James Poterba, leads a Cambridge-based staff of 45.