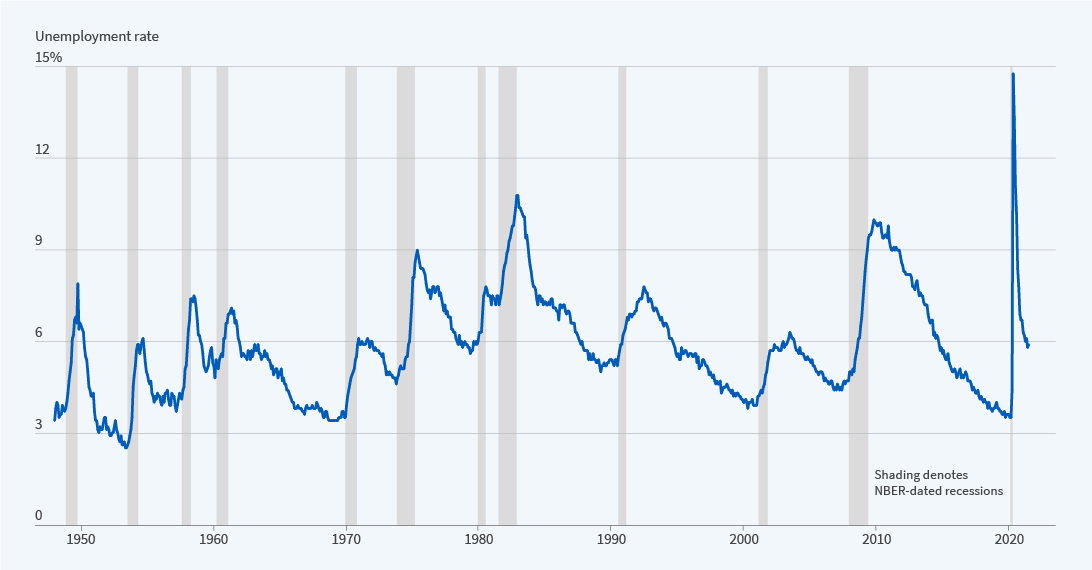 The NBER’s Business Cycle Dating Committee maintains a chronology of US business cycles. The chronology identifies the dates of peaks and troughs that frame economic recessions and expansions. A recession is the period between a peak of economic activity and its subsequent trough, or lowest point. Between trough and peak, the economy is in an expansion. Expansion is the normal state of the economy; most recessions are brief. However, the time that it takes for the economy to return to its previous peak level of activity or its previous trend path may be quite extended. According to the NBER chronology, the most recent peak occurred in February 2020. The most recent trough occurred in April 2020.

The NBER's definition emphasizes that a recession involves a significant decline in economic activity that is spread across the economy and lasts more than a few months. In our interpretation of this definition, we treat the three criteria—depth, diffusion, and duration—as somewhat interchangeable. That is, while each criterion needs to be met individually to some degree, extreme conditions revealed by one criterion may partially offset weaker indications from another. For example, in the case of the February 2020 peak in economic activity, the committee concluded that the subsequent drop in activity had been so great and so widely diffused throughout the economy that, even if it proved to be quite brief, the downturn should be classified as a recession.

Because a recession must influence the economy broadly and not be confined to one sector, the committee emphasizes economy-wide measures of economic activity. The determination of the months of peaks and troughs is based on a range of monthly measures of aggregate real economic activity published by the federal statistical agencies. These include real personal income less transfers, nonfarm payroll employment, employment as measured by the household survey, real personal consumption expenditures, wholesale-retail sales adjusted for price changes, and industrial production. There is no fixed rule about what measures contribute information to the process or how they are weighted in our decisions. In recent decades, the two measures we have put the most weight on are real personal income less transfers and nonfarm payroll employment.

The committee makes a separate determination of the calendar quarter of a peak or trough, based on measures of aggregate economic activity over the relevant quarters. Two measures that are important in the determination of quarterly peaks and troughs, but that are not available monthly, are the expenditure-side and income-side estimates of real gross domestic product (GDP and GDI). The committee also considers quarterly averages of the monthly indicators described above, particularly payroll employment.