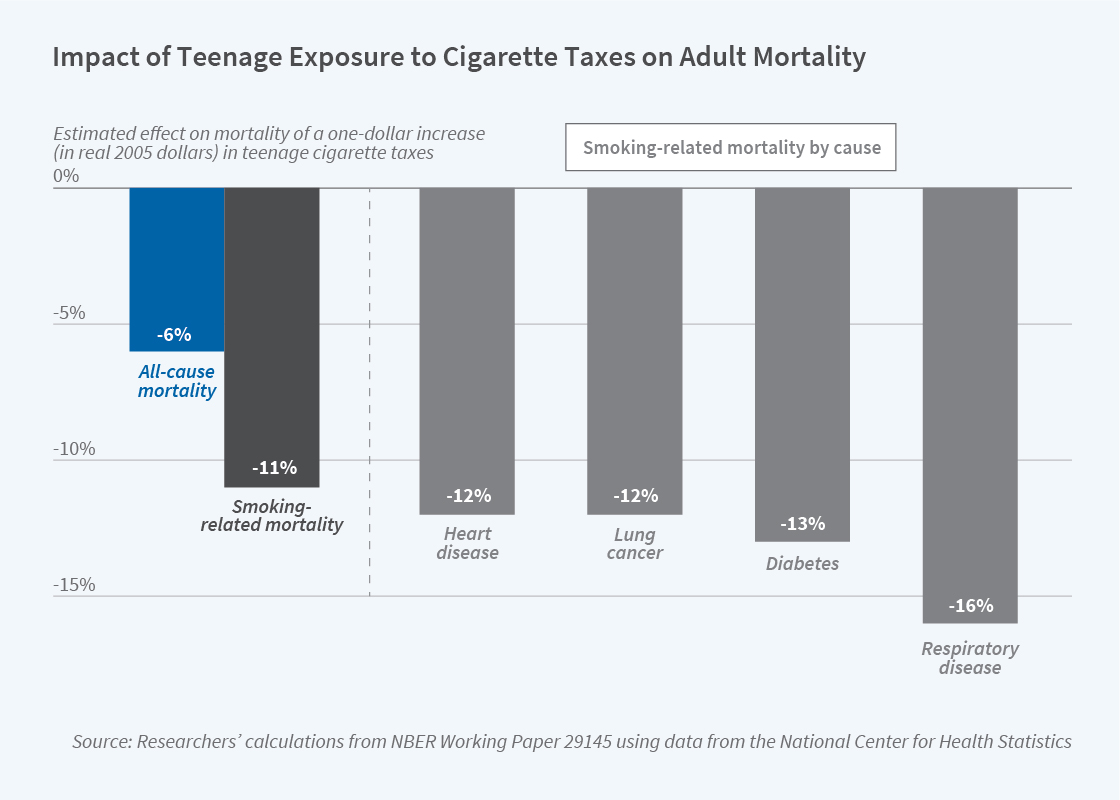 In two recent NBER working papers, researchers use variation in the taxation of tobacco products — including both cigarettes and e-cigarettes — to better understand tobacco use patterns and their implications. Both studies focus on state and local variation in the magnitude of tobacco taxes during adolescence, the age range when many users initiate smoking or vaping habits.

Electronic cigarettes and other electronic nicotine delivery systems (ENDS) have become the most prevalent form of tobacco use among teenagers, with 15 percent reporting current ENDS use. Many states and municipalities have responded by imposing taxes on these products. Between 2015 and 2019, nine states and two counties either introduced a new ENDS tax or changed an existing ENDS tax. The taxes varied considerably, ranging from $0.05 per fluid milliliter (mL) in North Carolina in 2015 to over $2.52 per fluid mL in Washington, DC in 2019. The researchers use these policy changes to identify the impact of higher taxes on patterns of tobacco use among teenagers.

Their analysis shows that ENDS use is responsive to taxation. In an analysis of 2014–2019 data from Monitoring the Future, a $1 increase in the tax per fluid mL (measured in 2019 dollars) reduced the likelihood that an adolescent reported ENDS use by 1.9 percentage points (or 13 percent). Higher taxes don’t merely deter occasional users: about two-thirds of the decline arose from a reduction in regular users.

The researchers caution, however, that these taxes may generate offsetting health risks. Notably, some teens responded to higher ENDS taxes by substituting towards combustible cigarettes. A $1 increase in tax per fluid mL was associated with a 1.3 percentage point (or 20 percent) increase in the likelihood of current cigarette use. The researchers note that the health costs from greater youth smoking as a result of e-cigarette taxes may undercut or even outweigh benefits from reduced youth e-cigarette vaping.

Another recent study, Cigarette Taxes, Smoking, and Health in the Long Run (NBER Working Paper 29145), by researchers Andrew I. Friedson, Moyan Li, Katherine Meckel, Daniel I. Rees, and Daniel W. Sacks, uses a similar methodology to estimate the long-term risks of cigarette smoking as a teen.  It finds that cigarette taxes experienced as a teen are related to subsequent smoking behavior and mortality in adulthood.

The average cigarette tax rate that adults in their 1992–2018 sample period experienced during adolescence was $0.76 per pack (in 2005 dollars). But tax rates varied substantially over time and across states, ranging from $0.23 to $4.63 per pack. The researchers use state-level changes in cigarette tax policy, and inflation-driven erosion in real tax rates, to identify the impact of taxes on subsequent smoking behavior. In an analysis of the Tobacco Use Supplement to the Current Population Survey, they find that a $1 increase in cigarette taxes during adolescence decreased the likelihood of adult smoking participation by 1.8 percentage points, an 8 percent decline.

How did this long-run difference in smoking behavior affect health? The researchers turn to Vital Statistics mortality data for adults, between 1990 and 2018, for an answer. They conclude that a $1 increase in cigarette taxes during adolescence reduced adult mortality by 24 per 100,000 population, a 6 percent decline. The figure shows that this effect on mortality is concentrated among diseases that the Centers for Disease Control and Prevention considers related to smoking, including heart disease, lung cancer, diabetes, and respiratory disease.

Importantly, these estimated effects on mortality are identified by changes in the cigarette tax experienced as a teenager, not by other personal characteristics that might be related to both smoking behavior and health outcomes, such as mortality expectations, discount rates, or tolerance for risk. The researchers write that their estimates “provide clean evidence of a direct causal chain between smoking and health outcomes that is not available in the extant medical literature.”

Taken together, these studies suggest that taxation of tobacco products can influence patterns of tobacco use over the short and long term, and can affect mortality. However, taxes can induce substitution towards different types of tobacco products with different harm levels, and these potential interactions merit consideration in the design of policy.

Intended and Unintended Effects of E-cigarette Taxes on Youth Tobacco Use
Cigarette Taxes, Smoking, and Health in the Long-Run