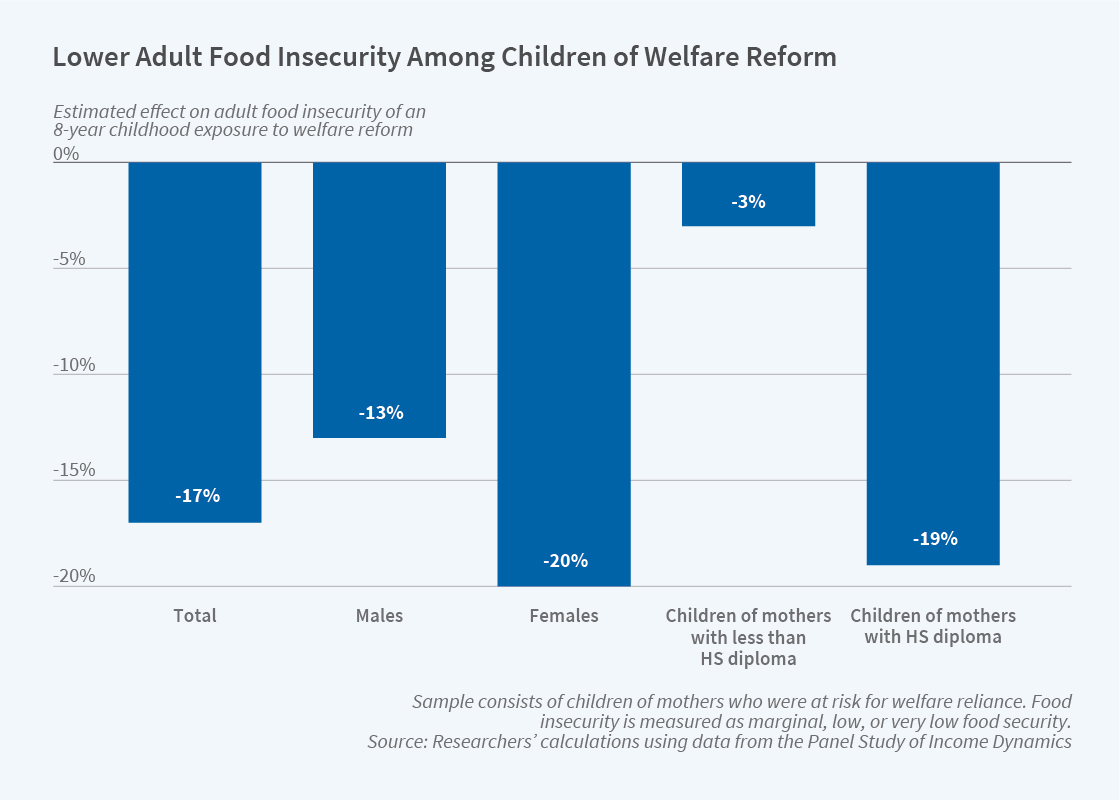 Children who had greater exposure to the welfare reforms of the 1990s reported less food insecurity as adults.

In 1992, some US states began experimenting with welfare reforms. Federal waivers allowed them to develop programs to reduce cash assistance by imposing work requirements and other conditions on beneficiaries. In 1996, the federal government ended cash welfare benefit entitlements and replaced them with block grants that imposed a five-year lifetime limit on cash assistance and instituted national guidelines on work requirements. California, the last state to comply with the federal reforms, did so in 1998.

In Effects of Welfare Reform on Household Food In­security across Generations (NBER Working Paper 29054), Hope Corman, Dhaval M. Dave, Nancy Reich­man, and Ofira Schwartz-Soicher examine the impact of these reforms on the food security of affected children when they become young adults. They analyze data from the Panel Study of Income Dynamics, a nationally representative sample of about 5,000 families that was launched in 1968. It follows the original respondents and their families, providing detailed information on their lives and economic circumstances, and spans the period before, during, and after welfare reform. In various years from 1999 to 2019, it included 18 US Department of Agriculture questions on food hardship. Respondents were asked questions like these: In the last 12 months were you ever hungry but didn’t eat because there wasn’t enough money for food? Were you often, sometimes, or never worried whether your food would run out before you got money to buy more? How often did you rely on only a few kinds of low-cost food to feed your children? The researchers combine selected food hardship questions to create standard USDA measures of food insecurity.

The researchers focus on young adults whose mothers were at risk of relying on public assistance. These mothers, the target group, were unmarried and had at most a high school education. The comparison group consisted of married women with similar socioeconomic characteristics living in the same state. Because marriage generally precludes eligibility for cash assistance, the married women were not at risk of relying on public assistance. Members of the target group were more likely to be Black and less likely to have completed high school than mothers in the comparison group. About 10 percent of the full sample reported low or very low food security.

Effects of Welfare Reform on Household Food Insecurity Across Generations