An increasingly discussed explanation for why women and men experience different labor markets is the existence and persistence of gender identity norms. Influential research by George Akerlof and Rachel Kranton1 has imported into economics insights from social psychology regarding an individual's social identity and how it can influence behaviors and choices. These researchers define identity as one's sense of belonging to one or multiple social categories. One's identity encompasses a clear view about how people who belong to that category should behave. In their model, identity directly enters the utility function: identity influences economic outcomes because deviating from the behavior that is expected for one's social category is assumed to decrease utility. Hence, people's economic actions can in part be explained by a desire to conform with their sense of self. Akerlof and Kranton apply their model to the concept of gender identity. In this case, the two relevant social categories are those of "man" and "woman," and these two categories are associated with specific behavioral prescriptions which, if violated, will decrease utility.

Gender identity norms may help to explain why occupational segregation by gender has been slow to disappear. Women may feel discomfort entering certain professions, and men may feel discomfort if women enter these professions if the professions are strongly "gendered" (for example, only men, not women, are bankers). This is related to Claudia Goldin's pollution theory of discrimination,2 which also assumes that men derive utility from their work not just because of the wage they earn but also because of how their image is affected by where they work and with whom they work. In Goldin's model, men want to keep women away from certain jobs because broad female participation in those jobs would reduce the prestige men obtain from working in them. The reduction in prestige in Goldin's case is driven by the signals that might be sent to outsiders about the qualifications required to perform these jobs if too many women enter them. In other words, Goldin's model is closer to a statistical discrimination model while Akerlof and Kranton's is more directly reminiscent of a taste-based discrimination model.

Motherhood has been shown to be particularly disruptive to women's labor force participation and earnings. With Lawrence Katz and Goldin, I demonstrate that much of the large gender gap that emerges over time between male and female graduates of top MBA programs is attributable to gender differences in hours worked and frequency of career interruptions; the presence of children is the main contributor to women's shorter work hours and greater career discontinuity.7 The fact that work-family balance considerations are more binding for mothers than for fathers could be seen as another manifestation of gender identity norms (for example, "a working mom cannot have a warm relationship with her child") that have not fully adjusted to improving educational and labor market opportunities for women.

Another behavioral prescription often associated with gender identity is that “a man should earn more than his wife.” With Emir Kamenica and Jessica Pan, I explore the possible manifestations of this gender identity norm in patterns of relative income within households, marriage formation, wives' labor force participation, marital satisfaction, and the division of home production.8 Using U.S. administrative data on individual income, we show that the distribution of relative income within couples (wife income/(wife income + husband income)) exhibits a sharp drop to the right of .5, for example, when a wife starts to earn more than her husband. 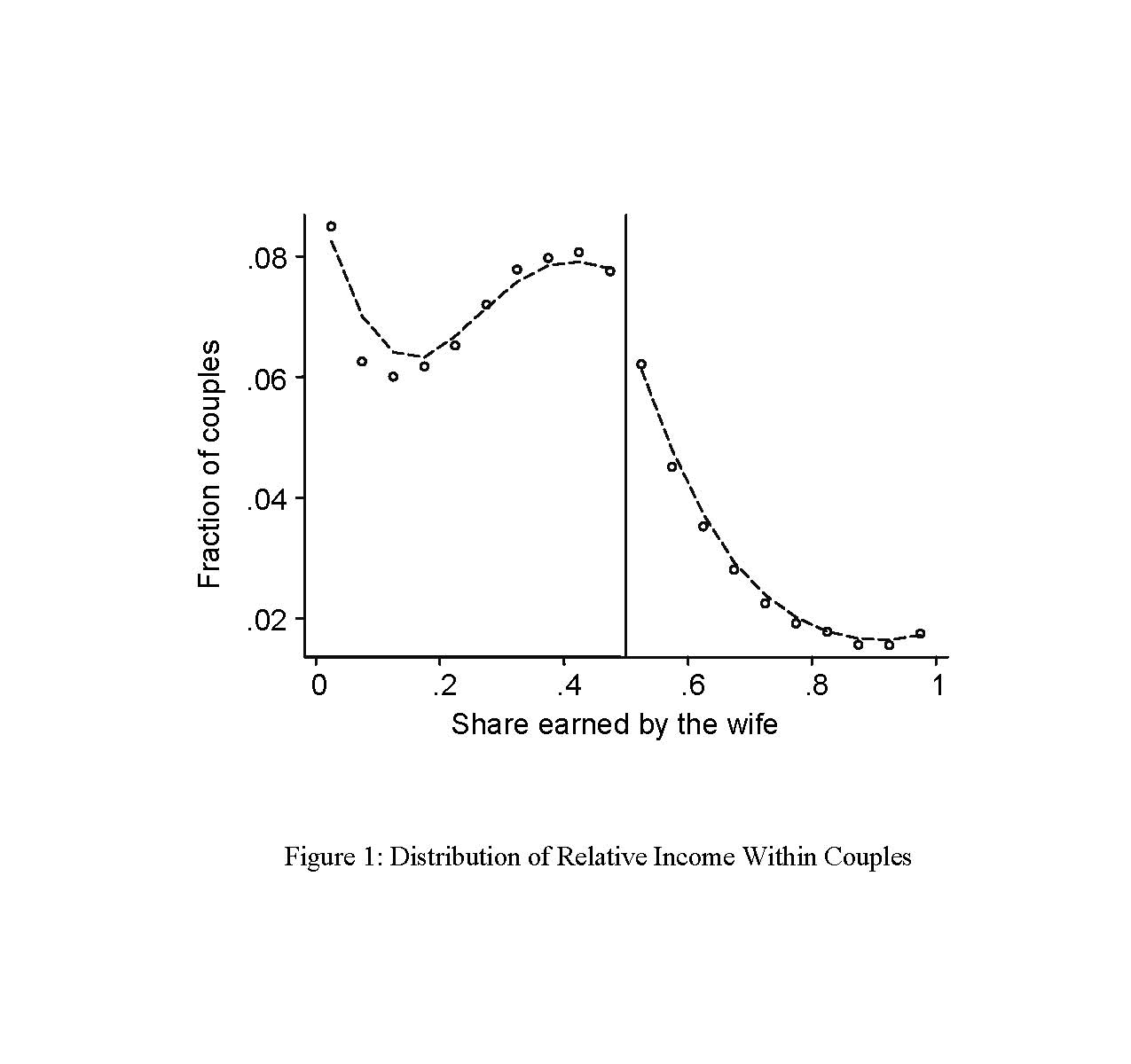 In U.S. Census data, we also show that within a marriage market over time, when a randomly chosen woman becomes more likely to earn more than a randomly chosen man, the marriage rate declines (see also Tara Watson and Sara McLanahan9 ). Looking within couples, we show that when the probability that the wife's potential income exceeds her husband’s actual income is higher, the wife is less likely to participate in the labor force. We also provide suggestive evidence that this specific gender identity norm might influence the quality of marriage, with couples where the wife earns more than the husband reporting being less happy. Finally, using the American Time Use Surveys, we show that the gender gap in home production, how much more time the wife spends on non-market work than the husband, is larger in couples where the wife earns more than the husband, a finding that runs counter to standard models of the division of labor within the household.

One could also ask whether gender identity norms are responsible for gender differences in psychological attributes, such as attitudes toward risk, negotiation, and competition, which have been related to differences in career choices and earnings between men and women10 and might contribute to women's under-representation at the very top of the corporate hierarchy.11 Psychologists have shown that people expect women to be docile and men to be confident and self-assertive. Some have argued that a higher degree of risk aversion is viewed as the norm for females while part of the male identity is to be a risk-taker. These expectations could be part of socially constructed gender norms, rather than a reflection on innate differences; behaving according to these expectations may reflect a willingness to conform to what is expected from one's social category.

In a laboratory setting, Daniel Benjamin, James Choi, and A. Joshua Strickland study how making salient a specific aspect of one's gender or racial identity affects a subject's likelihood of making riskier choices or more patient choices.12 The study consists of generating exogenous variation in identity effects by temporarily making more salient ("priming") a certain social category and seeing how the subjects' choices are affected by this priming. The gender identity salience manipulation is done through a questionnaire at the beginning of the experiment in which subjects are asked to identify their gender and whether they are living on a coed versus a single-sex dormitory floor. While the study uncovers some rich patterns with respect to racial identity, making gender salient appears to have no significant effects on either men's or women's patience, or their level of risk aversion. Of course, it is possible that the experimental priming was too weak to temporarily affect preferences.

Assuming that the gender identity model is relevant to women's labor market outcomes, one is left with the question of what drives the strength of gender identity norms. In an identity model, the changes in women's labor market outcomes over the last decades could only have occurred in conjunction with deep societal changes in the strength and meaning of the male and female social categories. Innovations in contraception may have contributed to altering women's identity in the 1960s and 1970s. As Goldin and Katz show, the introduction of the birth control pill led to both an increase in women's investment in schooling and an increase in the age at first marriage.13 This, Goldin argues, meant that women's adult identities were less influenced by traditional gender roles, as these identities were now more likely to be formed before marriage and more influenced by career considerations.14 Other papers have discussed the influence of nurturing in the formation of gender identities. Many believe that gender role attitudes are largely determined in early childhood, and several papers have documented something akin to an intergenerational transmission of gender identity norms. Fernandez, Fogli, and Claudia Olivetti15 provide an explanation for why men may differ in how traditional their views are with respect to whether women belong at home or in the workplace. They argue that a significant factor in the steady increase of women's involvement in the labor force has been the growing number of men being raised in families with working mothers. These men may have developed less stereotypical gender role attitudes, with weaker association between their masculinity and being the only or main breadwinner in their household. In particular, they show that men whose mothers worked are more likely to have working wives. This finding suggests a virtuous cycle: with more of these "new" men around, women should rationally invest more in labor market skills and thereby expose their sons to this less traditional family structure.

Olivetti, Eleonora Patacchini, and Yves Zenou explore how the work behavior of a teenager's own mother, as well as that of her friends' mothers, affect the work decisions of that teenager once she becomes an adult.16 They find that both intergenerational channels positively affect a woman's work hours in adulthood, but the cross effect is negative, indicating the existence of cultural substitutability. That is, the mother's role model effect is larger the more distant she is (in terms of working hours) from the friends' mothers.

While the literature discussed above suggests the malleability of gender identity norms over rather short horizons (one generation), other work suggests stickiness of these norms in the longer term. Alberto Alesina, Paola Giuliano, and Nathan Nunn show that ethnicities and countries where ancestors practiced plough cultivation, which required more physical strength than shifting cultivation and hence was less suited to female labor, today have beliefs that exhibit greater gender inequality as well as lower rates of female labor force participation.17 They identify the causal impact of plough cultivation use by exploiting variation in the historical geo-climatic suitability of the environment for growing crops that differentially benefited from the adoption of the plough.

Marianne Bertrand is a Research Associate in the NBER's Programs on Corporate Finance, Development Economics, and Labor Studies, and is the Chris P. Dialynas Distinguished Service Professor of Economics at the University of Chicago Booth School of Business. She is also a Research Fellow at the Center for Economic Policy Research and the Institute for the Study of Labor, a Co-Director of Chicago Booth's Social Enterprise Initiative, a member of the Faculty Advisory Board for the University of Chicago's Collegium for Culture and Society, and a member of the Board of Directors for the Abdul Latif Jameel Poverty Action Lab. She serves as co-editor of the American Economic Review.

Bertrand is an applied microeconomist whose research has been published widely. She has received several awards and honors, including the 2004 Elaine Bennett Research Prize, awarded by the American Economic Association to recognize and honor outstanding research in any field of economics by a woman at the beginning of her career, and the 2012 Society of Labor Economists’ Sherwin Rosen Prize for Outstanding Contributions in the Field of Labor Economics. She is a Fellow of the American Academy of Arts and Sciences.

Born in Belgium, Bertrand received a bachelor's degree in economics from Belgium's Université Libre de Bruxelles in 1991, followed by a master's degree in econometrics from the same institution the next year. She moved to the United States in 1993 and earned a Ph.D. in economics from Harvard University in 1998. She was a faculty member in the Department of Economics at Princeton University for two years before joining Chicago Booth in 2000.