Corporate Board Quotas and Labor Market Outcomes for Women 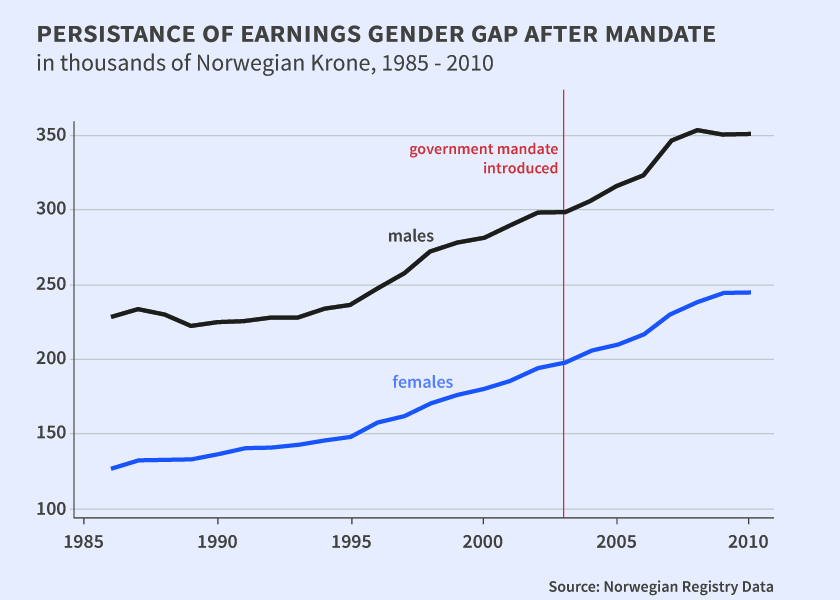 Though board representation rose, the gender wage gap persisted.

After Norway passed a law mandating that public limited-liability corporations create boards with no less than 40 percent of each gender represented, the number and quality of women board directors rose and the pay gap vis-a-vis male board members shrank. But 10 years into this experiment, which now is being copied in other countries, there's not much evidence of a trickle-down effect for other women in the workforce, according to Breaking the Glass Ceiling? The Effect of Board Quotas on Female Labor Market Outcomes in Norway (NBER Working Paper No. 20256). "We find no evidence of significant differential improvements for women in the post-reform cohort, either in terms of average earnings or likelihood of filling in a top position in a Norwegian business," write authors Marianne Bertrand, Sandra E. Black, Sissel Jensen, and Adriana Lleras-Muney, although large standard errors mean they cannot rule out the possibility.

At best, the reform may have increased women's representation in the C-suite of targeted firms, a very small group of individuals. "The representation of women does not improve anywhere else in the [targeted] firms' income distribution (top 95th percentile, top 90th percentile, top 75th percentile). We also see no improvements on gender wage gaps among top earners and find no evidence of changing work environments in affected firms."

Additionally, there is no evidence that the rise in female board members inspired younger women to consider business careers or delay child-rearing in order to further careers. In the authors' survey of 763 students at the prestigious Norwegian School of Economics, from which many board members have graduated in the past, fewer than 10 percent of women said the reform encouraged them to get a business degree. "If anything, the share of women obtaining business degrees fell after 2004 (except for 2007)." The authors also write that "we see no apparent reduction in the large gender gap in earnings that emerge in the first few years post graduation."

Although the World Economic Forum ranks Norway third among nations for opportunities for women, the proposed reform in 2003 met with considerable resistance in the business community. Before it was enacted, corporate leaders argued there were not enough qualified women to fill the board positions. Even after the reform, most companies did not do much to increase female participation. By 2005, only 17 percent of board positions were held by women. So the government added sanctions, which took effect in 2008. That's when the average share of women on the boards of those companies reached 40 percent.

In addition to increasing the representation of women on boards, the reform improved pay equity within boards. The pay gap with male counterparts on boards narrowed from about 38 percent to 28 to 32 percent. Moreover, despite the business community's stated fears about decreasing quality, female board members post-reform were actually better-educated than the pre-reform cohort. The study found they had an extra half-year of education and MBA degrees on par with the male board members. The reform may have affected too few women to have a large impact. A majority of the 563 public limited-liability companies subject to the law in 2003 went private or otherwise changed their corporate status, leaving only 179 firms subject to the legislation by 2008. Although not all of this decline can be attributed to the legislation, it limits the number of firms and women affected by the law and thus the law's potential impact.

"While we do not observe any trickling-down to other top managerial positions in affected firms or elsewhere, it is possible not enough time has passed for such spillovers to occur," the authors write.

Breaking the Glass Ceiling? The Effect of Board Quotas on Female Labor Market Outcomes in Norway