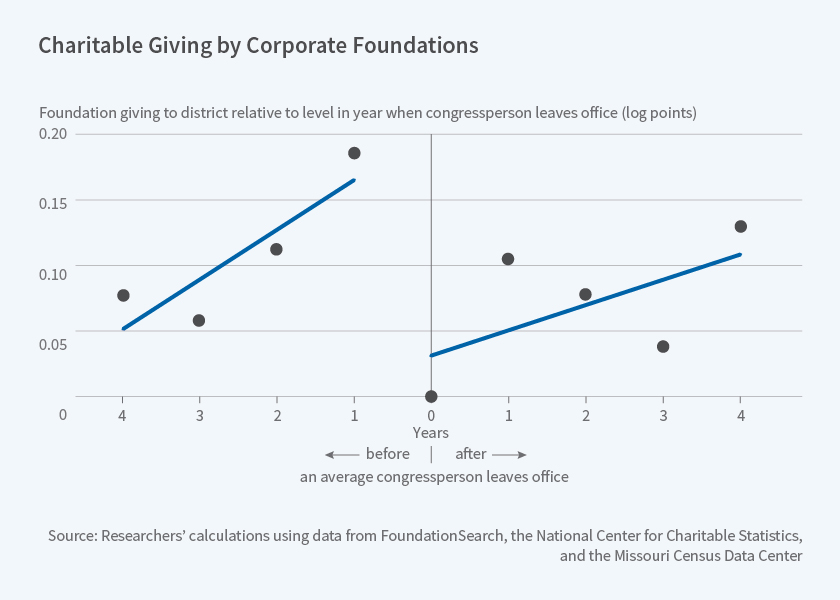 Nonprofit organizations with a member of Congress on their board are four times more likely than peer organizations to receive grants from corporate foundations.

The channels through which corporations may support elected officials are a subject of long-standing and contentious debate in the United States. Firms' capacity to spend on behalf of elected officials of whom they approve increased markedly with the Supreme Court's Citizens United decision in 2010. While a large body of research has studied the determinants of corporate political contributions and has attempted to track their consequences, almost no attention has been paid to another channel through which corporations may interact with elected officials: corporate philanthropy.

Do corporations which support or have business with office holders make sizeable charitable donations either to charities located in those politicians' districts, or on whose boards the politicians serve?

This is the question examined by Marianne Bertrand, Matilde Bombardini, Raymond Fisman, and Francesco Trebbi in Tax-Exempt Lobbying: Corporate Philanthropy as a Tool for Political Influence (NBER Working Paper No. 24451). Using data on corporate charitable giving, lobbying, and congressional committee assignments, the researchers construct a measure that links corporate interests, which are declared in corporate lobbying disclosure forms, to relevant congressional committees, and then to the members of those committees.

Studying corporate foundations associated with Fortune 500 and S&P 500 companies, they find that a foundation's grants to charitable organizations located in a congressional district are higher when the representative of that district holds a seat on a committee that deals with policy relevant to the firm associated with the foundation. This pattern surrounding corporate charitable giving and committee seats is echoed in corporate political action committee (PAC) spending. When legislators leave Congress, there is a drop in corporate donations into their districts, as seasoned and influential members of Congress are replaced by freshmen, a pattern that also appears for PAC contributions.

Similar patterns are observed in corporate giving to nonprofits in which members of Congress have a personal interest, such as those on whose board the congressperson serves. Corporate foundations are more likely to support a nonprofit with a member of Congress on its board if that member sits on a committee relevant to the corporation. In general, nonprofit organizations with a politician on their board are over four times more likely to receive grants from corporate foundations than are their comparable peer foundations.

The researchers develop a model to assess the fraction of corporate charity that may be politically motivated, and estimate that about 7 percent of the $18 billion in total corporate charitable contributions made in 2014, or about $1.3 billion, was allocated in ways that might have had political motivation. They note that this is 280 percent higher than annual PAC contributions made to candidates in the 2013-14 cycle, and about 40 percent of total annual lobbying expenditures in 2014.

The research suggests that campaign donations and lobbying may not be the only channels through which corporations seek to influence elected officials. They see their findings "as highlighting the need to go beyond easily observable channels in order to gain a broader appreciation of the full role of corporate influence in politics."

Tax-Exempt Lobbying: Corporate Philanthropy as a Tool for Political Influence