Professionals Licensed at State Level Are Slow to Move Interstate 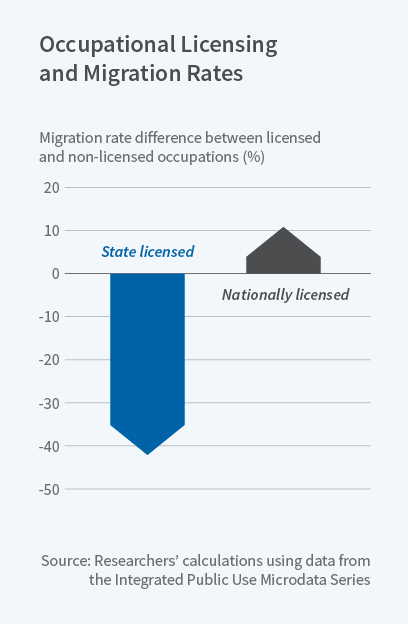 In contrast, members of licensed occupations with national licensing exams move across state boundaries at much higher rates.

Between 1980 and 2010, interstate migration in the United States fell. In 1980, 3 percent of U.S. residents made an interstate move; that number dropped to about 1.5 percent in 2010. The fraction of the employed population changing jobs fell from 16 percent to 11 percent over the same period. The decline in geographic and employment mobility may be associated with reduced efficiency of the labor market, as workers are less inclined to take up their highest-value employment options.

In Is Occupational Licensing a Barrier to Interstate Migration? (NBER Working Paper No. 24107), Janna E. Johnson and Morris M. Kleiner examine whether a rising tide of state-level occupational licensing may be contributing to declining geographic mobility.

Today, about 30 percent of the U.S. workforce requires an occupational license, up from only 5 percent in 1950, and 15 percent in 1980. Licensing requirements for professionals vary from state to state, so those moving to a new state often must undergo an arduous re-licensing process. The researchers theorize that these state-level requirements might limit workers� willingness to move for better jobs, and thus their wage and employment prospects.

Using data from the American Community Survey, the researchers examine interstate migration patterns between 2005 and 2015 for workers across 22 licensed professions, ranging from pest control workers to psychologists and dentists. They find that the between-state migration rate for individuals in occupations with state-specific licensing exam requirements is 36 percent lower relative to members of other occupations. By contrast, workers employed in professions that have national licensing exams — whose re-licensure costs are much lower when they make an interstate move — do not display lower interstate migration rates.

There are significant differences in the interstate migration rates of different licensed occupations: Some, such as pharmacists and teachers, exhibit particularly low relative rates of migration. The researchers find no reduction in mobility rates for other occupations, such as insurance agents and chiropractors. There are even differences among state-licensed professions with national licensing exams.

Social workers and dentists, for example, migrate at much lower rates than nurses and physicians. The researchers hypothesize that these differences are driven by state-specific licensing requirements for professions that have national licensing exams. Social workers, for example, take a national licensing exam, but some states require specific additional courses. Likewise, dentists and dental hygienists must pass a national written exam, but must also pass a clinical exam that can vary from state to state.

In an effort to identify a causal link between occupational licensing requirements and mobility, the researchers look at what happens to the geographic mobility of lawyers when states enter into reciprocity agreements that reduce the barriers to migration. They find that the migration of lawyers into a state increases after a reciprocity agreement is introduced.

The cumulative effects of occupational licensing policies could be significant. The researchers calculate that licensing may lead to annual earnings losses of between $178 and $711 million for licensed workers, and that the increase in occupational licensing since 1980 could account for between 3 and 13 percent of the decline in interstate migration since then. They note that the aging of the U.S. population explains about 10 percent of the decline in migration in that period.

Is Occupational Licensing a Barrier to Interstate Migration?