Measuring the Tightness of the Late-COVID Labor Market 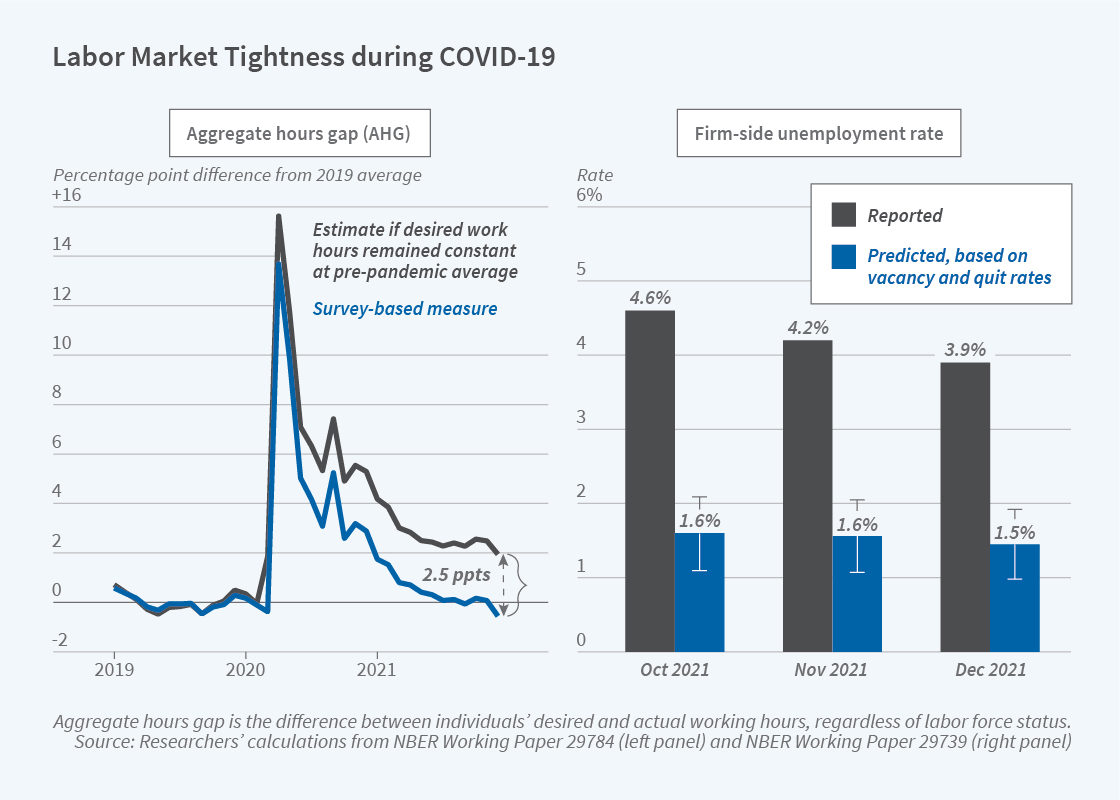 Two recent NBER working papers develop new strategies for measuring the tightness of US labor markets and conclude that during 2021, these markets were significantly tighter than standard yardsticks, such as the aggregate unemployment rate, indicated.

In How Tight Are US Labor Markets? (NBER Working Paper 29739), Alex Domash and Lawrence H. Summers explore the relationships between four different slack indicators — the number of unemployed people actively seeking a job, the employment-to-population ratio for adults aged 25 to 54, the job vacancy rate, and the quit rate — and nominal wage growth.

In December 2021, there were 1.7 job openings per job seeker, the highest level on record using data back to January 1960. The reported unemployment rate was 3.9 percent. From a firm’s point of view, however, the researchers estimate that the effective unemployment rate was between 1.2 and 1.7 percent — more than 2 percentage points lower than the usually discussed rate. This estimate is based on the past association between vacancy rates, quit rates, and the unemployment rate.

The US labor market in the second year of the COVID-19 pandemic was tighter than traditional measures indicate.

The researchers’ estimate of firm-side unemployment predicts wage growth better than the unemployment rate. In the fourth quarter of 2021, wage inflation was 4.9 percent, its highest rate in 20 years. The researchers conclude based on historical evidence that if the vacancy rate, quit rate, and inflation rate remain at their late-2021 levels, wage growth will surpass 6 percent over the next year.

The researchers estimate that the US faces a labor shortage of about 6.9 million workers. They calculate that since the onset of the pandemic, about 1.3 million workers have left the labor force due to population aging, which would have occurred with or without the pandemic, about 1.5 million have left for COVID-19 health concerns, 1.4 million because of immigration restrictions, 1.3 million because of excess retirements, 1 million due to reduced incentives to work, and 400,000 in reaction to vaccination mandates. They conclude that labor markets will continue to be very tight unless there is a slowdown in labor demand.

In a related study, Has the Willingness to Work Fallen during the COVID Pandemic? (NBER Working Paper 29784), R. Jason Faberman, Andreas I. Mueller, and Ayşegül Şahin construct a labor market utilization measure from the questions in the Job Search Supplement of the Survey of Consumer Expectations of 2013 to 2021. They subtract each individual’s actual hours worked from their desired work hours and sum the resulting difference across individuals to calculate an aggregate hours gap (AHG). Analyzing desired hours of work complements the study of vacancy and quit rates.

The researchers conclude that part-time workers and those who are out of the labor force reduced their desired work hours by 4.6 percent during the pandemic. The drop in desired hours characterized almost all demographic groups, suggesting that explanations of reduced labor supply that focus on disruptions in schooling and childcare cannot account for the whole decline.

Individuals in jobs with a lot of social contact desired fewer work hours, while those in jobs with low social contact desired more work hours. The AHG for part-time workers declined during the pandemic, with these workers reducing their desired hours by an average of 3.1 hours per week. Also, a lower share of part-timers wanted full-time work. While the pandemic did not change the work hours desired by the unemployed, there were substantial changes among those out of the labor force, many of whom normally report that they would prefer some part-time work. During the pandemic, the fraction of those out of the labor force who preferred not to work at all rose from 41 percent to 50 percent.

As the willingness to work fell, nearly everyone in the labor force increased their reservation wage, the wage that a job would need to pay in order to induce them to accept it. On average, reservation wages increased by 6.2 percent. The researchers conclude that “overall lower willingness to work has led to a contraction in labor supply that persists throughout the pandemic.”

How Tight are U.S. Labor Markets?
Has the Willingness to Work Fallen during the Covid Pandemic?