Secular Stagnation and the Decline in Real Interest Rates 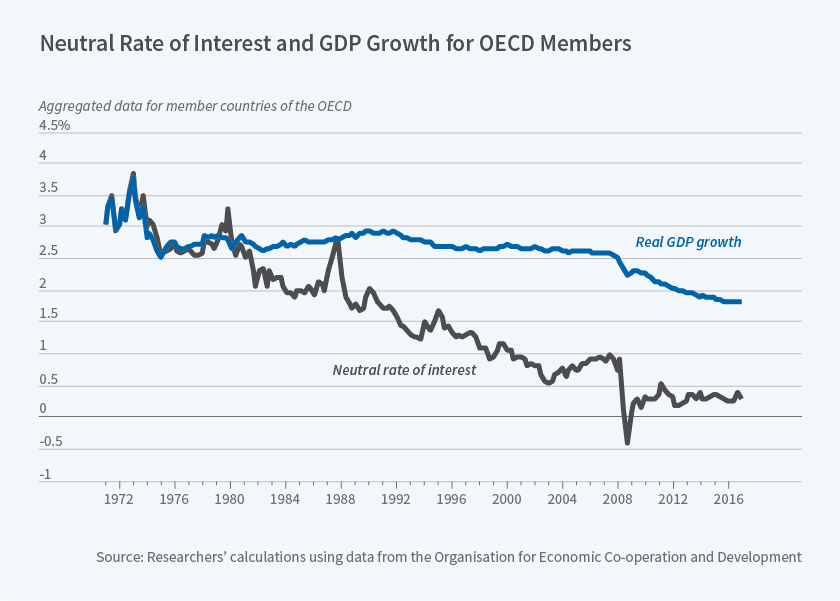 Real interest rates would have fallen much further in the last half century if governments had not expanded social insurance programs and taken on more debt.

The long decline of real interest rates in developed nations is one of the central macroeconomic trends of the last half-century. Łukasz Rachel and Lawrence H. Summers present new evidence on the causes of this decline in On Secular Stagnation in the Industrialized World (NBER Working Paper 26198).

The researchers focus on “the advanced economy interest rate,” an aggregate constructed from the prevailing interest rates in the OECD nations. They find that the neutral real global interest rate — the rate which balances desired saving and investment and thus leads to full employment and stable inflation — has fallen about 3 percentage points since the 1970s. Today, they conclude, the average neutral real rate is around zero in industrialized nations. Crucially, absent growing government debt and deficits and increasingly generous social insurance programs, the neutral rate would have fallen nearly 7 percentage points and would now be significantly negative.

is difficult to calculate the neutral real rate for any single open economy because it depends on a nation’s current account position, which depends on its real exchange rate, which in turn is affected by current and expected future real interest rates. To overcome this problem, the researchers combine data from all developed countries and treat them as a single economic entity. They justify this by pointing out that the aggregate current account balance of this bloc has varied within a narrow range — less than 1.5 percent of GDP — since the 1970s. And it has been on the rise in recent years, suggesting that international capital flows, all else equal, have raised interest rates. The researchers also assume perfect internal capital mobility, given the large capital flows between the developed nations and common trends in long-term real rates and stock markets.

In addition, instead of focusing on traditional measures of liquidity and risk, the researchers examine factors relating to saving and investment trends to analyze long-term changes in neutral real rates. They note that interest rates on highly liquid securities have declined in tandem with those on relatively illiquid government-issued inflation-indexed bonds and bond-like financial derivatives. While risk premiums on stocks have risen, the increases are small relative to the decades-long decline in real interest rates.

The researchers’ baseline analysis indicates that if real interest rates had not gone down over the last half century, savings would have exceeded investment in OECD countries by between 9 and 14 percentage points of GDP. They point to several policy changes over this period that counterbalanced this potential excess.

Government policies have played a central role in offsetting potential excess savings. For example, developed nations have increased their debt dramatically during this period of study, from about 20 to 70 percent of GDP. They have boosted old-age payments from an average of 4 to 7 percent of GDP, and raised old-age healthcare spending from 2 to 5 percent of GDP.

Drawing on the existing empirical estimates of the impact of these policies on interest rates, the researchers perform calculations which suggest that the effect of these policies on interest rates has been substantial. For example, holding other variables constant, the increase in public debt should have raised real rates by between 1.5 and 2 percentage points over the last four decades. Increased social security and healthcare provision likely had a similar, if not slightly larger, effect.

To better understand and further quantify the impact of these policies on real interest rates, the researchers use two models of household saving: one focusing on lifecycle considerations; the other emphasizing idiosyncratic risk and precautionary saving. The baseline calibration of these models confirms the earlier results. The researchers conclude that the policy changes taken together may have raised equilibrium real interest rates by between 3.5 and 4 percentage points.

“The implication of our analysis that but for major increases in deficits, debt, and social insurance, neutral real rates in the industrial world would be significantly negative by as much as several hundred basis points suggests substantial grounds for concern over secular stagnation,” the researchers conclude. “[T]he private economy is prone to being caught in a low inflation underemployment equilibrium if real interest rates cannot fall far below zero.”

On Secular Stagnation in the Industrialized World