Tracking the Price of Nails since 1695 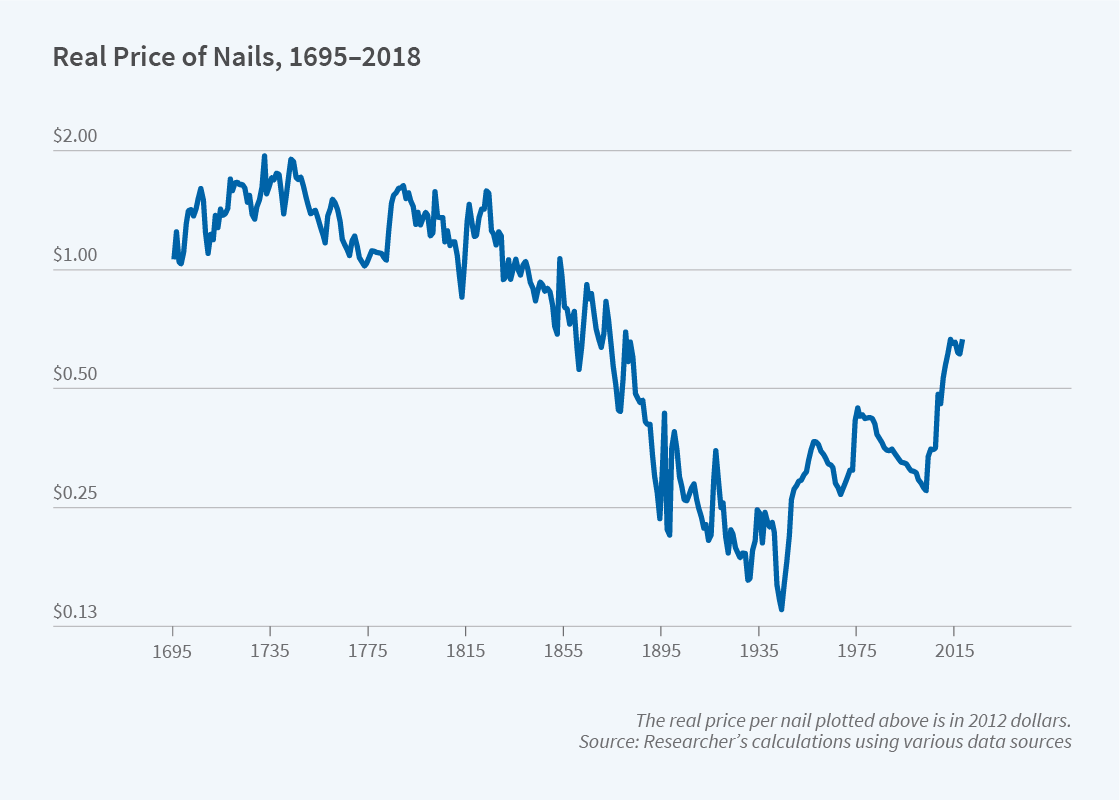 The real price of nails fell by a factor of 10 from the late 1700s to the middle of the twentieth century, largely as a result of productivity growth in manufacturing.

In The Price of Nails since 1695: A Window into Economic Change (NBER Working Paper 29617), Daniel E. Sichel tracks nail prices over three centuries. He uses this extraordinary data series to explore changes in manufacturing processes and productivity growth. He focuses on nails because they are a basic manufactured product whose form and quality have changed relatively little since the late 1600s. The production method, however, has changed dramatically. At the beginning of the period being studied, nails were hand-forged by hammering a rod of iron. Later, nails were cut from strips of iron or steel, and most recently, cut from wire.

Sichel constructs an index of nail prices beginning in 1695. For the first hundred years of his sample, the prices are drawn from accounts data maintained at Greenwich Hospital in the United Kingdom. From 1784 on, the data reflect prices in the United States, starting with wholesale nail prices in Philadelphia and drawing on a wider range of sources over time.

Sichel compares nail prices with an index of overall consumer prices and finds that the real price of nails declined, on average, by about 1.5 percent per year between the late 1700s and the mid-1900s. This translates into a real price decline of 90 percent. This decline, while substantial, pales in comparison to the declines in the prices of some other goods and services that have been studied over long periods, such as computing and lighting.

While declining input prices contributed to reductions in nail prices, the most important source of the decline was multifactor productivity growth in nail manufacturing due to increasing specialization of labor and the reorganization of production processes. The long-term trend of declining real nail prices reversed in the middle of the last century. This was partly due to rising material prices, but also to difficulty in tracking domestic production of basic nails during the last half century. In the wake of import competition, US nail producers have shifted toward specialty nail production. Finally, including the complementary technology of nail guns, which have diffused in recent decades, the price of installed nails has risen much less since 1950 than the price of nails themselves.

The share of nails in GDP dropped from 0.4 percent in 1810 — comparable to today’s share of household purchases of personal computers — to a trivial share today. The decline in nail prices had important effects on downstream industries, most notably construction. In addition, Sichel highlights the changing “place” of nails in the public mind as nails shifted from being precious to being a throw-away item.

The study highlights some of the difficulties involved in price measurement, such as changes in quality, import substitution, and the role of complementary input technologies. Changes in nail prices provide useful insight into some of the patterns of US manufacturing development.

Development of the American Economy
Productivity, Innovation, and Entrepreneurship

The Effects of Letters of Recommendation in the Youth Labor Market