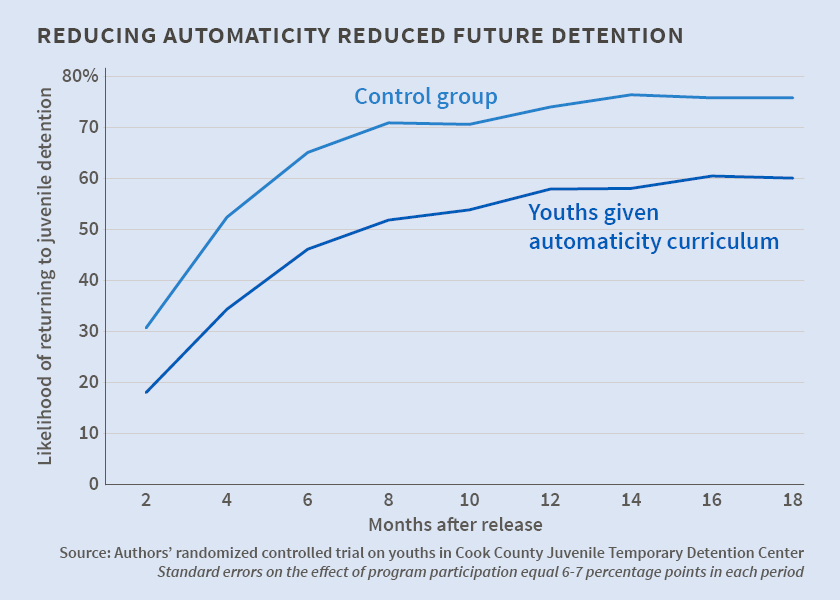 Interventions that get youths to slow down and behave less automatically in high-stakes situations show positive results in three experiments.

Disparities in youth outcomes in the United States are striking. For example, among 15-to-24 year olds, the male homicide rate in 2013 was 18 times higher for blacks than for whites. Black males lose more years of potential life before age 65 to homicide than to heart disease, America's leading overall killer. A large body of research emphasizes that, beyond institutional factors, choices and behavior contribute to these outcomes. Those choices include decisions around dropping out of high school, involvement with drugs or gangs, and how to respond to confrontations that could escalate to serious violence.

In Thinking, Fast and Slow? Some Field Experiments to Reduce Crime and Dropout in Chicago (NBER Working Paper No. 21178), authors Sara B. Heller, Anuj K. Shah, Jonathan Guryan, Jens Ludwig, Sendhil Mullainathan, and Harold A. Pollack explain these behavioral differences using the psychology of automaticity. Because it is mentally costly to think through every situation in detail, all of us have automatic responses to some of the situations we encounter. These responses—automaticity—are tuned to situations we commonly face.

The first intervention (called Becoming a Man, or BAM, developed by Chicago-area nonprofit Youth Guidance) involved 2,740 males in the 7th through 10th grades in 18 public schools on the south and west sides of the city. Some youths were offered an automaticity-reducing program once a week during school or an after-school sports intervention developed by Chicago nonprofit World Sport Chicago. The authors find that participation in the programming reduced arrests over the program year for violent crimes by 44 percent, and non-violent, non-property, non-drug crimes by 36 percent. Participation also increased engagement with school, which the authors estimate could translate into gains in graduation rates of between 7 and 22 percent.

A second study of BAM randomly assigned 2,064 male 9th and 10th graders within nine Chicago public high schools to the treatment or to a control condition. The authors found that arrests of youth in the treatment group were 31 percent lower than arrests in the control group.

The third intervention was delivered by trained detention staff to high-risk juveniles housed in the Cook County Juvenile Temporary Detention Center. The curriculum in this program, while different from the first two interventions, also focused on reducing automaticity. Some 5,728 males were randomly assigned to units inside the facility that did or did not implement the program. The authors found that those who received programming were about 16 percent less likely to be returned to the detention center than those who did not.

The sizable impacts the authors observe from all three interventions stand in stark contrast to the poor record of many efforts to improve the long-term life outcomes of disadvantaged youths. As with all randomized experiments, there is the question of whether these impacts generalize to other samples and settings. The interventions considered in this study would not be costly to expand. The authors estimate that the cost of the intervention for each participant in the first two studies was between $1,178 and $2,000. In the third case, the per-participant cost was about $60 per juvenile detainee. The results suggest that expanding these programs may be more cost-effective than other crime-prevention strategies that target younger individuals.

The authors also present results from various survey measures suggesting the results do not appear to be due to changes in mechanisms like emotional intelligence or self-control. On the other hand results from some decision-making exercises the authors carried out seem to support reduced automaticity as a key mechanism. The results overall suggest that automaticity can be an important explanation for disparities in outcomes.

Thinking, Fast and Slow? Some Field Experiments to Reduce Crime and Dropout in Chicago