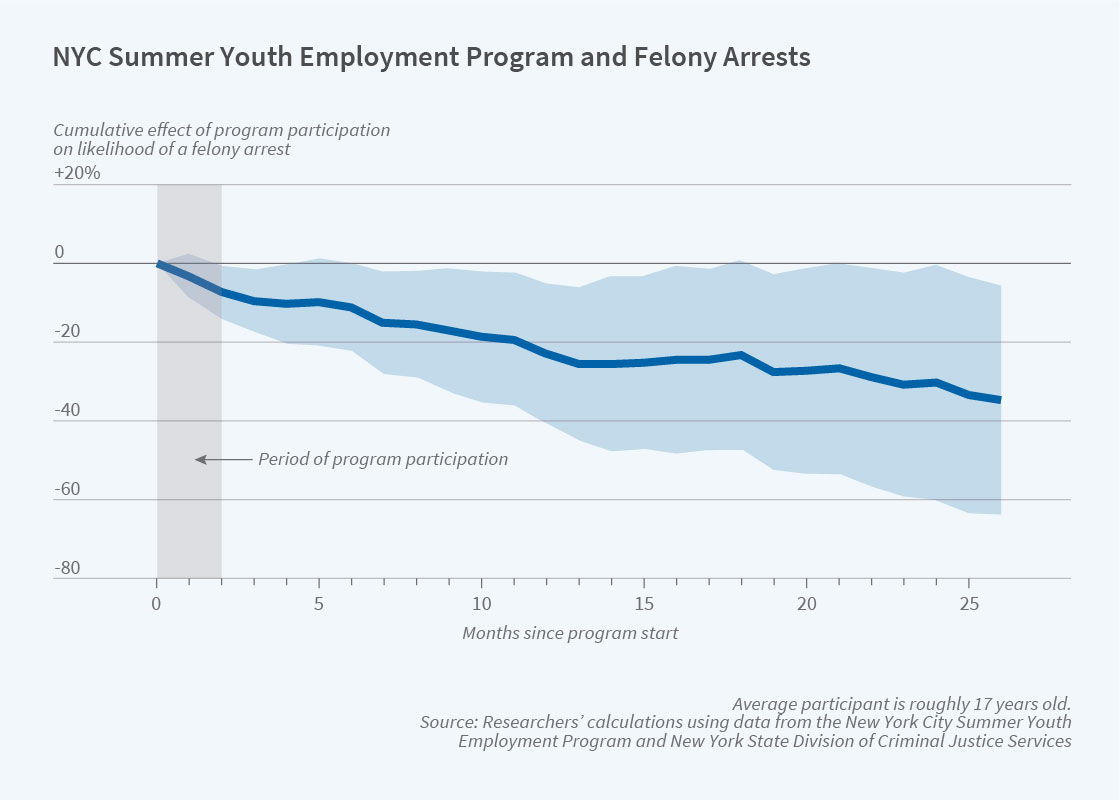 A key goal of youth employment programs is reduction in young people’s involvement with the criminal justice system. In The Effects of Youth Employment on Crime: Evidence from New York City Lotteries (NBER Working Paper 28373), Judd B. Kessler, Sarah Tahamont, Alexander M. Gelber, and Adam Isen explore whether participation in summer youth employment programs (SYEPs) has a significant effect during the summer of the program or only after the summer ends. They investigate whether participation decreases the chance that youth end up in contact with the criminal justice system, and whether there are benefits for youth who are not at high risk for criminal activity before participating in the program.

The researchers link four years of data from the New York City Summer Youth Employment Program — the country’s largest such program — to criminal records data maintained by the New York State Division of Criminal Justice Services, enabling them to investigate the outcomes of 163,447 youth who participated in New York’s SYEP lottery between 2005 and 2008. Because the New York SYEP draws from a broad swath of youth, they are able to analyze the program’s effect on both at-risk and low-risk youth. About 3 percent of the applicants had been arrested before the program summer; the researchers deem them to be at risk of future contact with the criminal justice system.

The researchers estimate that the New York SYEP prevents 34 arrests per thousand youth in the program summer. Applying estimates from other studies of the social cost of crime, they conclude that the reduction in criminal activity and criminal justice system engagement associated with the program is worth between $650 and $1,250 per participant for the at-risk youth. Using the lower estimate suggests that the benefits of averted arrests during the program summer cover about 47 percent of program costs for at-risk youth; the higher valuation estimates would imply almost complete coverage of program costs. Estimated benefits for the low-risk group are dramatically lower, in the range of $2 to $3 per participant. The researchers conclude that the criminal justice social cost savings of the program are largely concentrated among the at-risk population.

The Effects of Youth Employment on Crime: Evidence from New York City Lotteries