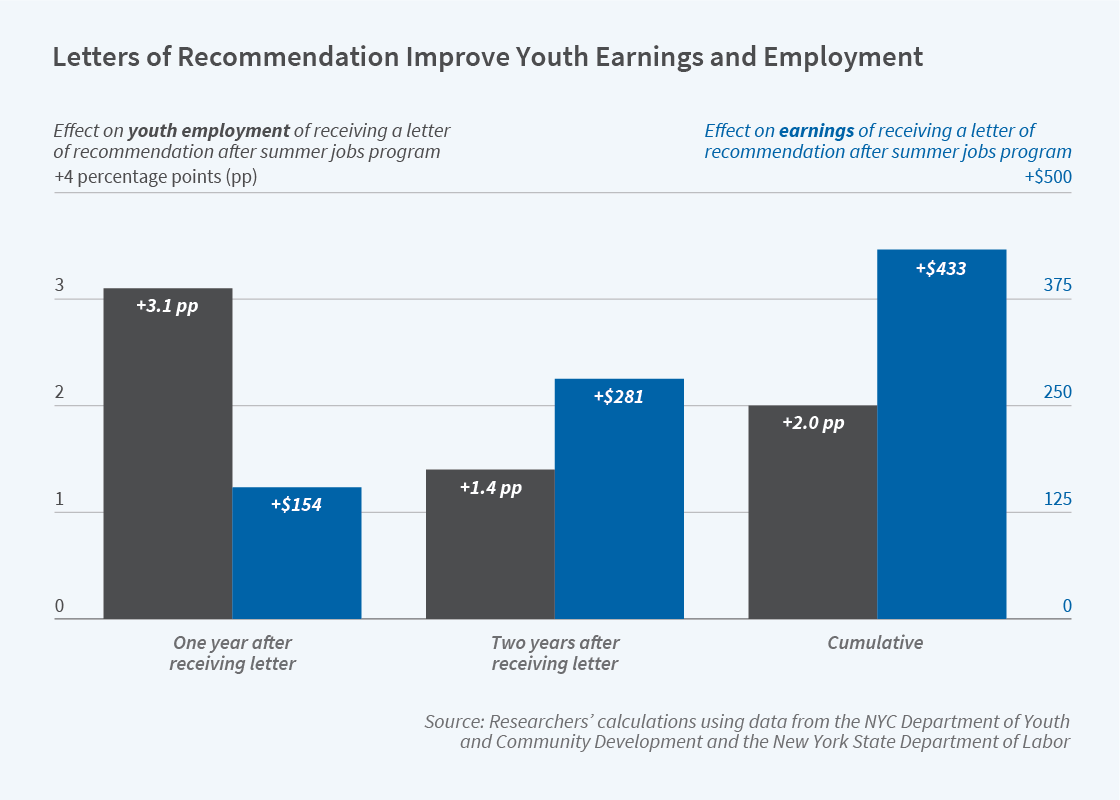 Providing summer youth workers with letters of recommendation to use in job applications raised their employment and earnings, according to Sara B. Heller and Judd B. Kessler in The Effects of Letters of Recommendation in the Youth Labor Market (NBER Working Paper 29579).

The researchers partnered with the New York City Summer Youth Employment Program — an initiative that provides summer jobs to youths aged 14 to 24 — to email easy-to-complete surveys to supervisors of youth workers in 2016 and 2017. Just under 30,000 youths received ratings, of whom 8,780 were in the treatment group and rated highly enough by their supervisors to receive a computer-generated recommendation letter that could be used in applying for subsequent jobs. The researchers examined New York State Department of Labor data to see what effect, if any, receiving letters had on the youths’ employment and salaries.

The researchers found that a summer worker who received a letter was 3.1 percentage points more likely to be hired in the next year. This represents a 4.5 percent increase over the 70 percent average employment rate for the control group of youths who did not receive letters. Positive employment effects were persistent: those who received letters were 2 percentage points more likely to have a job over the next two years, a 2.3 percent increase over the control group average of 84 percent during this period. Earnings were also higher for those who received a letter, by $154 in the first year. The cumulative earnings increase over two years was $433, or 4.4 percent, higher than the earnings of those who did not receive letters. The nonrecipients’ earnings averaged roughly $9,900 over this time period.

To discern whether the stronger employment outcomes of those with letters were due to a change in the behavior of the youth workers in their job search, or in the behavior of potential employers, the researchers invited 4,000 participants from both treatment and control groups in the 2017 cohort to apply for a short-term online job. Those who received letters were no more likely to apply for the job — and no more likely to check a box asking to be considered for a more-selective, higher-paying opportunity — than those who did not. This suggests that the positive employment effects were not driven by factors such as increased motivation, job search, or confidence.

The researchers speculate that this difference in signaling to employers is the key driver of outcome changes: that the letters affect hiring rates only when employers see them. If so, the difference in observed letter use would imply that actually using the letter increased employment by 15 percent in the first year and 8 percent over two years, and raised earnings by about $1,400 over two years.

The employment rate for summer workers from minority groups drove the overall employment effects, with no significant changes among Whites, even though the average rating for the former group was lower than for the latter. This may suggest that youths from minority groups face larger frictions in the labor market than their White counterparts. The researchers also found that high school graduation rates slowed down but did not stop among students receiving letters of recommendation, suggesting that labor market activities competed with schoolwork.

Information Frictions and Skill Signaling in the Youth Labor Market