Many NBER-affiliated researchers publish some of their findings in medical and other journals that preclude pre-publication distribution. This makes it impossible to include these papers in the NBER Working Paper Series. This is a partial listing of recent papers in this category by NBER affiliates.

Behavioral Heuristics in Coronary-Artery Bypass Graft Surgery
Olenski AR, Zimerman A, Coussens S, Jena AB. New England Journal of Medicine 382(8), February 2020, pp. 778–779.
Behavioral heuristics (mental shortcuts that simplify decision making) are common in medicine and can lead to cognitive biases that affect clinical decisions. Left-digit bias is the tendency to categorize continuous variables on the basis of the left-most numeric digit. This study examined the effect of this bias on medical treatment decisions. Using data on Medicare beneficiaries from 2006 through 2012, the researchers found that patients who were hospitalized with acute myocardial infarction in the two weeks after their 80th birthday were significantly less likely to undergo coronary-artery bypass grafting (CABG) than similar patients admitted in the two weeks before their 80th birthday, despite an absence of recommendations in clinical guidelines to reduce CABG use at this age. This effect was not found for those admitted in the two weeks before or after their 77th through 79th or 81st through 83rd birthdays. These findings suggest that patients who are hospitalized with acute myocardial infarction and who are 80 years and two weeks of age may be perceived by physicians as being at greater risk for complications—and thus may receive more conservative treatment—than patients who are 79 years and 50 weeks of age, if cognitive biases lead physicians to discretely categorize patients as being “in their 80s” rather than “in their 70s.” The consequences of such bias are significant, since the researchers also found higher mortality among patients admitted shortly after their 80th birthday, adjusted for covariates.
Social Distancing Responses to COVID-19 Emergency Declarations Strongly Differentiated by Income
Weill JA, Stigler M, Deschenes O, Springborn MR. PNAS 117(33), August 2020, pp. 19658–19660.

In the absence of a vaccine, social distancing measures are one of the primary tools to reduce the transmission of the severe acute respiratory syndrome coronavirus 2 (SARS-CoV-2) virus, which causes coronavirus disease 2019 (COVID-19). This study demonstrated that social distancing following US state-level emergency declarations substantially varied by income. Using mobility measures derived from mobile device location pings and an event study design focusing on behavior subsequent to state emergency orders, the researchers documented a reversal in the ordering of social distancing by income: high-income areas went from most mobile before the pandemic to least mobile, while, for multiple measures, the poorest areas went from least mobile to most. The data and analysis in this brief report did not allow for disentangling the causal roles of different factors affecting social distancing behavior, which may involve unequal access to information, differences in mapping of information into subjective probabilities of outcomes and risk preferences, and constraints affecting capacity or ability to respond. Constraints might include limits on capacity to work from home and on the ability to take paid or unpaid time off from work. The finding that lower income communities exhibit less social distancing, combined with prior findings of higher levels of preexisting health conditions and lower access to healthcare in these communities, suggests a double burden of the COVID-19 pandemic with stark distributional implications.
Randomized Trial Shows Healthcare Payment Reform Has Equal-Sized Spillover Effects on Patients Not Targeted by Reform
Einav L, Finkelstein A, Ji Y, Mahoney N. PNAS 117(32), August 2020, pp. 18939–18947.

Changes in the way health insurers pay healthcare providers may not only directly affect the insurers’ patients but may change the providers’ behavior in ways that also affect patients covered by other insurers. Using Medicare data from 2013–2017, the researchers tested for such spillovers in the context of a nationwide Medicare bundled payment reform for hip and knee replacements that was implemented in some areas of the country but not in others, via random assignment. The researchers estimated that the payment reform—which targeted traditional Medicare patients—had effects of similar magnitude and direction on the healthcare experience of nontargeted, privately insured Medicare Advantage patients. They found that the payment reform reduced the share of both traditional Medicare and Medicare Advantage patients being discharged to institutional post-acute care. The fact that providers change their treatment of nontargeted patients suggests that effects on these nontargeted patients need to be accounted for in analyses of a policy’s impact or optimal design. Study results may also be biased if the ‘control group’ of patients not targeted by the policy are also indirectly affected.

Life expectancy in the US increased 3.3 years between 1990 and 2015. To better understand the drivers of this increase, this study used vital statistics data and cause-deletion analysis to identify the conditions most responsible for changing life expectancy and quantified how public health, pharmaceuticals, other (nonpharmaceutical) medical care, and other/unknown factors contributed to the improvement. The researchers found that 12 conditions most responsible for changing life expectancy explained 2.9 years of net improvement (85 percent of the total). Ischemic heart disease was the largest positive contributor to life expectancy, and accidental poisoning or drug overdose was the largest negative contributor. Medications with the largest impacts included antiretroviral therapy for HIV, statins for ischemic heart disease, and surfactant and antenatal steroids for low-birthweight babies. Public health improvements were driven by smoking reduction, and increased adoption of known risk reduction practices such as seatbelt usage, putting infants to sleep on their backs, and traffic safety. Forty-four percent of improved life expectancy was attributable to public health, 35 percent was attributable to pharmaceuticals, 13 percent was attributable to other medical care, and -7 percent was attributable to other/unknown factors. These findings emphasize the crucial role of public health advances, as well as pharmaceutical innovation, in explaining improvements in life expectancy.

Hospital admissions in the US fell dramatically with the onset of the COVID-19 pandemic. Using data on approximately 1 million medical admissions from a large nationally representative hospitalist group, the researchers found that declines in non-COVID-19 admissions from February to April 2020 were generally similar across patient demographic subgroups and exceeded 20 percent for all primary admission diagnoses. Patients likely avoided seeking hospital care, perhaps in response to fear of contagion arising from media reports, or as a result of state stay-at-home orders. Relatively advantaged populations may have had greater access to ambulatory care resources for safely deferring hospital-based care, including telemedicine services, which increased dramatically during the pandemic. By late June/early July 2020, overall non-COVID-19 admissions had rebounded to 16 percent below pre-pandemic baseline volume (8 percent including COVID-19 admissions). Admissions remained depressed in hospitals with the largest COVID-19 exposure (23 percent below baseline), while admissions had rebounded nearly completely for hospitals with the least COVID-19 exposure (-7 percent). Non-COVID-19 patients who were age 70 or over continued to have a larger decline relative to baseline (-19 percent) than younger patients. Non-COVID-19 admissions also remained 20 percent below baseline for self-pay patients during the rebound. This finding could reflect changes in health care decisions and/or access among people who became uninsured due to job loss during the pandemic. Non-COVID-19 admissions remained substantially lower for patients residing in majority-Hispanic neighborhoods (32 percent below baseline). This pattern may reflect COVID-19 resurgences in Hispanic areas of the country in late June, but a larger concern is that it may reflect access challenges for Hispanic populations. Across the whole population, admissions in late June/early July 2020 had returned to baseline levels for pancreatitis, alcohol-related conditions, and diabetes, but remained well below baseline for patients with pneumonia (-44 percent), COPD/asthma (-40 percent), sepsis (-25 percent), urinary tract infection (-24 percent), as well as for acute ST-elevation myocardial infarction (-22 percent), and stroke (-17 percent), two acute conditions generally requiring immediate hospitalization to avoid adverse outcomes. The researchers discuss potential explanations for the reduced admissions, which include lower incidence of disease as well as elevated out-of-hospital deaths. 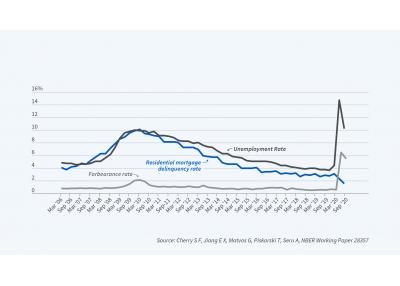 Household Debt Relief During the Pandemic 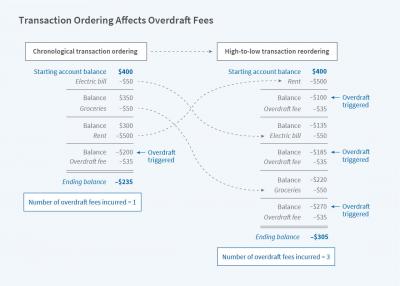