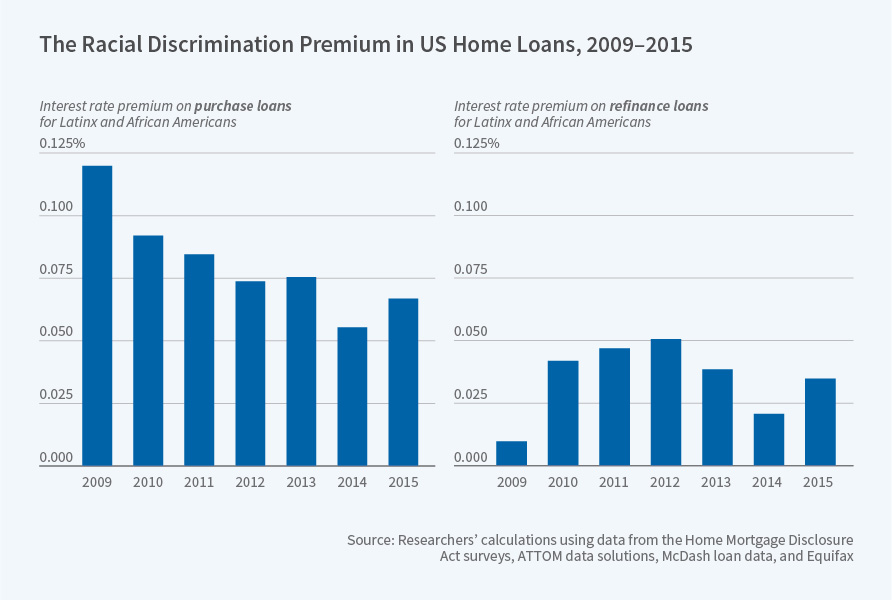 Minority borrowers pay, on average, 7.9 basis points more for first-purchase home mortgages. The gap is larger when they use face-to-face lenders rather than algorithm-based lenders.

In 2017, $2.25 trillion of the $13 trillion of outstanding household debt in the United States was associated with minority households. The bulk of this borrowing, $1.65 trillion, was mortgages.

Previous research has shown that minority households, on average, pay more to borrow than other households. The extent to which these disparities are due to discrimination by lenders, as opposed to differences in borrower attributes, is an ongoing subject of study. Some have observed that if discrimination is the source of differences in loan terms, then the rise of automation in the lending process as part of the FinTech revolution, and in particular the use of algorithms rather than loan officers to review mortgage applications, could narrow lending disparities.

In Consumer-Lending Discrimination in the FinTech Era (NBER Working Paper 25943), Robert Bartlett, Adair Morse, Richard Stanton, and Nancy Wallace estimate the magnitude of lending discrimination in the US mortgage market and assess whether the growth of FinTech has reduced bias in this market.

The researchers create a dataset of mortgages securitized by the government-sponsored enterprises (GSEs) Fannie Mae and Freddie Mac. GSEs assess a guarantee fee on each loan, calculated based on the borrowers’ credit score and the loan-to-value ratio; lenders are then guaranteed against credit risks. Because of this guarantee, differences in mortgage rates among loans with the same credit scores and loan-to-value ratios are driven exclusively by lender pricing decisions, not by differences in credit risks.

The researchers follow current US legal conventions in defining discrimination as the use of variables or practices in lending decisions that fall disproportionately on minorities and do not arise from the legitimate business necessity of scoring credit risk. In particular, conditioning loan terms on borrower attributes in a way that raises the lender’s profits, for example by taking advantage of limited competition in some markets when those attributes do not predict credit risk, represents discrimination.

The researchers find that African-American and Latinx borrowers who receive loans pay, on average, 7.9 basis points more than comparable borrowers for purchase mortgages and 3.6 basis points more when refinancing existing mortgages. They calculate that this discrimination costs such families about $765 million a year. FinTech algorithms discriminate about 40 percent less than face-to-face lenders: Minority borrowers pay 5.3 basis points more for purchase mortgages arranged through FinTech platforms. The researchers observe that their findings are consistent with both FinTech and non-FinTech lenders extracting monopoly rents in weaker competitive environments or seeking to identify borrowers who are not likely to shop aggressively across alternative lenders, and charging them higher rates.

With respect to loan rejections, the data show that in-person lenders reject minority applicants about 6 percent more often than comparable non-minority applicants, while algorithmic lenders show no difference in loan rejection decisions. The researchers calculate that, from 2009 to 2015, 0.74 to 1.3 million minority applicants were rejected who would have been accepted were it not for discrimination by loan officers. They point out that with “the GSE guarantee, if lenders were to discriminate in the accept/reject decision, it would imply that money is left on the table. … (s)uch unprofitable discrimination must reflect a human bias by loan officers.”

The researchers find that discrimination in lending declined from 2009 to 2015, a trend they suggest may be due to competition with traditional lenders from automated lending platforms and/or the ease of shopping around made possible by online applications. The results of this study suggest that FinTech may play an important role in reducing bias in the lending market.

Consumer-Lending Discrimination in the FinTech Era