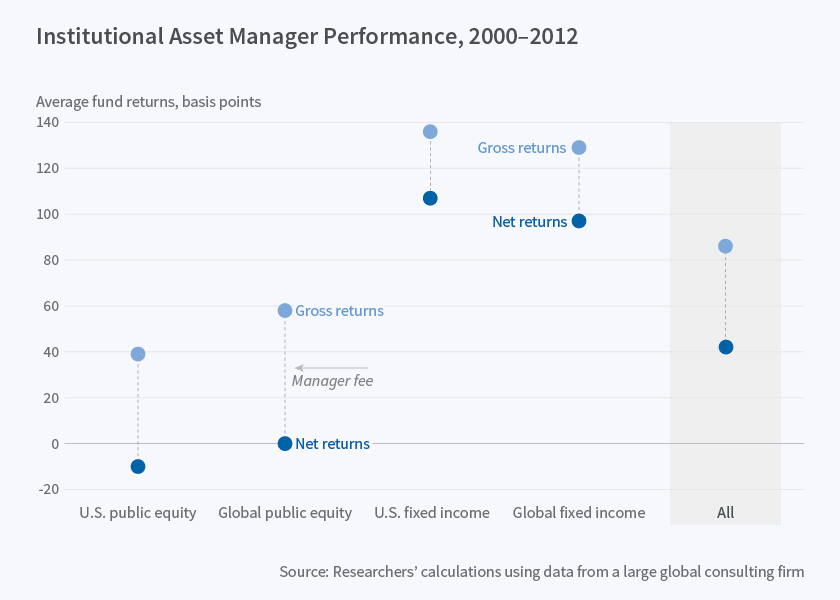 ...the edge they have enjoyed in offering profitable strategies may be eroding with the emergence of low-cost exchange-traded funds.

But the study also suggests that asset managers' advantage in offering these profitable smart beta strategies may be eroding because of the emergence of low-cost exchange-traded funds (ETFs), which can be used to replicate smart beta weightings with simple optimization calculations.

The researchers analyze data covering about $18 trillion in annual investments in institutional pooled funds from 2000 to 2012. They find that institutions paid outside asset managers $162 billion annually to handle their portfolios, or about 44 basis points (0.44 percentage points). These outside managers more than made up for their fees with average excess returns, relative to their benchmarks, of 86 basis points. Thus the net-of-fees return was 42 basis points. The researchers estimate net-of-fee returns that are higher than those in many previous studies of institutions' returns. They argue that this is because most other studies include portfolios that institutions manage in-house and typically look only at U.S. stocks, not foreign stocks or fixed-income investments. Their findings suggest that delegated investments, those managed by external managers, outperform those managed in-house at large institutions.

The researchers examine the source of the returns to active management, and conclude that so-called "smart beta" portfolios are what help active asset managers outperform traditional benchmarks. They demonstrate this by constructing portfolios that mimic smart beta portfolios, and find that their performance closely tracks the estimated performance of the managers' funds. While this implies that the active portfolio weightings associated with smart beta strategies have outperformed the traditionally weighted bench-mark portfolios, they also conclude that "the introduction of liquid, low-cost factor ETFs is likely eroding the comparative advantage of asset manager funds."