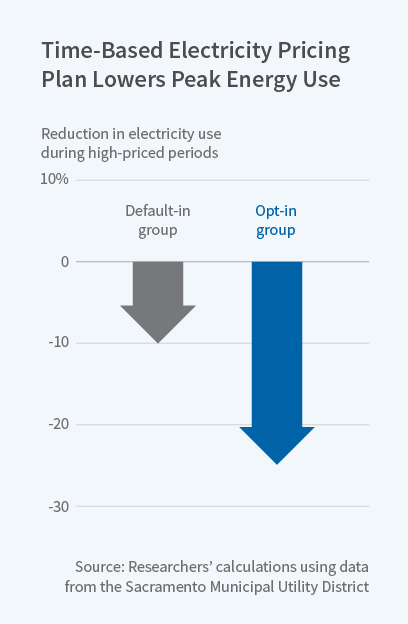 Electricity consumers who were defaulted into a time-based pricing plan became increasingly responsive to the arrangement and reduced their power consumption during high-priced periods.

Psychologists and economists have documented the existence of a powerful decision-making "default effect." When presented with a default option, consumers are significantly more likely to passively accept it than they would be to actively select it. Evidence of this default effect has been found in retirement saving, health insurance choice, organ donation, and other settings.

Electric utilities are challenged by sharp peaks in demand, particularly during the hot summer months when customers crank up their air conditioning. This results in substantial investment in �peaking plants� that may only be used a few days a year. Previous research has found that if more consumers were on time-varying pricing programs that discouraged consumption around peaks by confronting consumers with higher electricity prices, then utilities would be able to construct 44 percent fewer peaking plants.

The researchers studied a field experiment conducted between 2011 and 2013 by the Sacramento Municipal Utility District. Approximately 174,000 households in the district were randomly assigned to a business-as-usual control group or to one of two treatment groups in which participants were encouraged to participate in one of two different time-based pricing plans. In one treatment group, participants had to actively opt in to one of the two pricing plans. In the other, participants were informed that they had been automatically enrolled in one of two different time-based pricing plans but could opt out if they desired.

Predictably, the researchers found evidence of a large default effect. Over 95 percent of customers who were automatically enrolled in a time-based pricing plan stayed on that plan, whereas only 20 percent of those encouraged to consider such a plan actively opted in.

The researchers next turned their attention to the long-term implications of this effect and found that customers who were defaulted into the time-based plans reduced electricity consumption during high-priced peak periods by about 10 percent. Opt-in consumers exhibited larger usage reductions initially, cutting consumption by over 25 percent. The responses of default customers to the plans grew over time, while the magnitude of responses of opt-in customers declined over time.

Finally, the researchers tried to understand whether consumers who were defaulted into the time-based plans remained in the plans because of procrastination or high switching costs, in which case they might not actually be better off on the time-based plans, or because they grew to like the new plans. They concluded that customers did not pay much attention to the initial default into a time-varying pricing plan, but that they grew to like it and responded by reducing electricity consumption during high-priced periods.