A New Approach to Lending in Low- and Middle-Income Countries 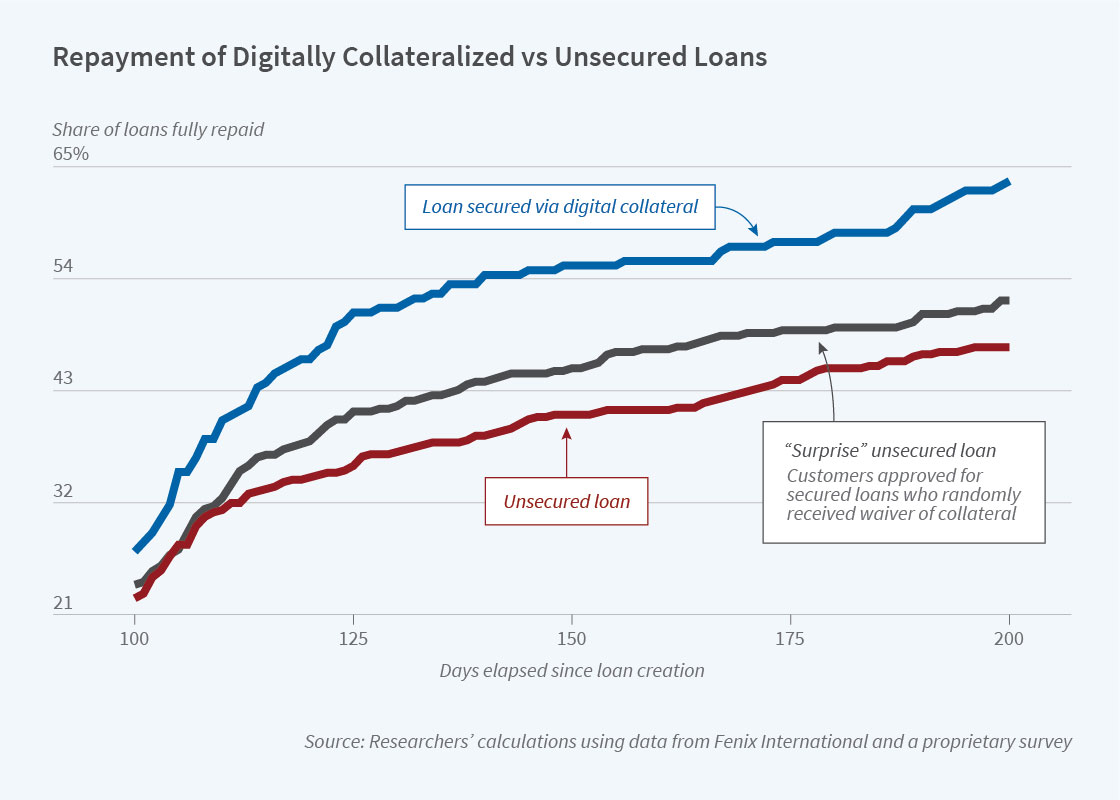 When small loans secured with “digital collateral” are in arrears, lenders can shut off the benefits of the collateralized asset without physically repossessing it.

While microfinance has not broadly succeeded in relaxing credit constraints for the poor in low- and middle-income countries, a new form of credit using “digital collateral” is effective, a study by Paul Gertler, Brett Green, and Catherine Wolfram finds.

Digital collateral allows a person to borrow in order to buy an asset, such as a smartphone, and use the phone to collateralize the loan. If the borrower fails to make payments, the lender can lock the phone remotely until payments are resumed.

In Digital Collateral (NBER Working Paper 28724), the researchers find that extending loans in this manner significantly reduces default rates and raises lenders’ rates of return. That’s due in part to the fact that bad borrowers are less inclined to sign up for a secured loan, but mostly due to an increase in the incentive to repay the loan so that borrowers can continue to enjoy the flow of services. Disabling the flow of services is cheap and easily reversible, without the need for costly and inefficient physical repossession of collateral.

Customer interest in the loans was high. More than 12 percent of the company’s 27,000-plus customers who got a text message about the deal expressed interest in the loan. Digital collateral served to screen out higher credit risks. Of those who were offered a loan secured with digital collateral 45 percent signed up compared to 51 percent of those offered an unsecured loan.

The school loans themselves had a positive impact. Children in households that were offered a school-fee loan were more likely to be enrolled in school than the control group of children in the study. The nonenrollment rate fell from 12 percent to 6 percent. On average, households with loans boosted their school-related expenditures by 44 percent.

Finally, the loans did not hurt household balance sheets. Purchases of assets rose only slightly and borrowing was mostly unchanged.

Even for collateralized loans, the lender can face inconsistent repayments. The median household in the study’s sample had its home solar system locked for 50 of the first 200 days of the loan. On one hand, this could be viewed as a feature of the digitally collateralized contract; customers need not make payments on days in which they do not require or have a low value for electricity, whereas borrowers face permanent repossession if they fail to repay a traditional secured loan. On the other hand, it suggests that there is potential room for improvement in the contract design. “Incentives to avoid nonpayment and screening remain important components of a sustainable lending business,” the researchers conclude. They posit that lending with digital collateral could be extended to purchases of other devices such as laptops, refrigerators, and televisions, and more broadly could facilitate investments that might help households to escape poverty.