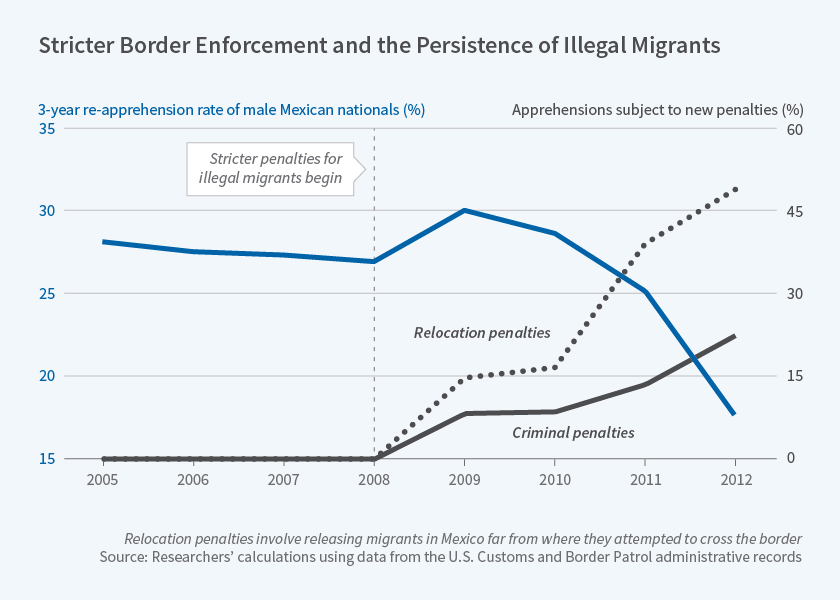 The number of Mexican immigrants attempting to enter the United States illegally dropped sharply after the Border Patrol rolled out the Consequence Delivery System in 2008–12.

Before 2008, more than 95 percent of Mexican nationals intercepted at the U.S. border were simply sent home without further repercussions. Over the next four years, under a sanctions program put in place by U.S. Customs and Border Protection, the Border Patrol began imposing administrative and, in some cases, criminal penalties for illegal border crossings. As of 2012, 85 percent of Mexicans apprehended at the border were subject to these sanctions.

Penalizing of immigrants for entering the United States illegally appears to have discouraged repeat attempts, according to an analysis of data from the program by Samuel Bazzi, Sarah Burns, Gordon Hanson, Bryan Roberts, and John Whitley in Deterring Illegal Entry: Migrant Sanctions and Recidivism in Border Apprehensions (NBER Working Paper No. 25100).

In 2005, 22.6 percent of apprehended migrants sampled were re-apprehended within three months, and 28.1 percent within 18 months, of their initial apprehension. In 2012, the re-apprehension rates were 14.4 percent and 17.5 percent, respectively. The program is still in force today.

The researchers restricted their sample to adult male Mexican nationals with six or fewer prior apprehensions, because the Border Patrol often exempted women and children from sanctions while imposing heavy penalties on the small number of migrants with lengthy records. They estimate that their sample group is representative of nearly 80 percent of Mexican nationals caught at the border from 2008 to 2012.

For those who are sanctioned, penalties may be as basic as administrative measures making it difficult for re-apprehended migrants to obtain legal entry in the future. Migrants might also be transported to, and released at, a location in Mexico far from where they attempted to cross, thus disrupting smuggling networks. Repeated violations could result in prison time.

The sanctions program, known as the Consequence Delivery System, was introduced at a time when illegal immigration was declining as a result of the Great Recession in the United States and demographic shifts in Mexico. Without the sanctions program, the researchers argue, the U.S. recovery would have been associated with a greater rebound in illegal immigration. They estimate that the program accounted for 28 percent to 44 percent of the reduction in re-apprehension rates from 2008 to 2012.

The impact of sanctions is also evident in surveys of apprehended Mexican nationals. In 2007, 88 percent said they intended to attempt another border crossing within three months. That figure fell to 77 percent in 2009 and 49 percent in 2013.

The researchers find that basic administrative sanctions "appear to be equally as effective as sanctions that entail costly detentions or relocations of migrants." They note that sanctions represent a potentially lower-cost deterrent than construction of substantial border barriers.