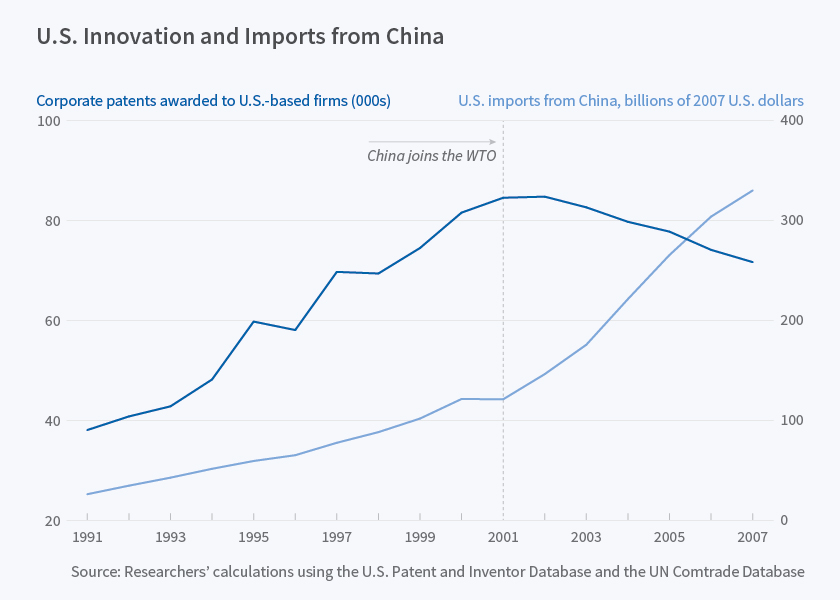 Corporations in U.S. industries in which the Chinese made their greatest inroads reduced R&D spending and produced fewer patents.

While much attention has been paid to the impact of Chinese imports on U.S. factory employment, relatively little has been focused on other affected areas, such as innovation by American manufacturers.

In Foreign Competition and Domestic Innovation: Evidence from U.S. Patents (NBER Working Paper 22879), David Autor, David Dorn, Gordon H. Hanson, Gary Pisano, and Pian Shu compare firm-level data on patents obtained in the period 1975 to 1991—before the surge in Chinese imports—with data for the period 1991 to 2007. They find that while patent output and exposure to trade were not significantly correlated in the earlier period, they were in the latter.

China's exports made up nearly 19 percent of the world's total in 2013, up from just 2.3 percent in 1991. The study finds that corporations in U.S. industries where the Chinese made their greatest inroads experienced the most pronounced decline in innovation.

The researchers use patents as their main proxy for innovation, but the study's conclusions are corroborated by corresponding trends in research and development spending. Corporations tightened their belts across the board as imports eroded revenues. There was no association between rising imports and patents generated among entities relatively immune to international market forces, such as universities, hospitals, and nonprofit research institutions.

In conducting their study, the researchers controlled for other factors that could influence the rate of patent generation, such as the post-2001 dot-com bust, a trend toward greater scrutiny of patent applications, and pre-existing trends in the rate of patenting in key industries.

The study's long-term perspective, using data from 1975 to 2007, reveals a growth trend in patenting in the computer and electronics industries and a trend of stagnation of patenting in chemicals and pharmaceuticals, which are two of the most important sectors for innovation. Both of these trends predate the surge in Chinese import competition of the 1990s and 2000s, which was much stronger in the computer and electronics industries than in industries that create new chemical patents.

Given the countervailing trends in these two large, patent-intensive sectors, simple correlations would suggest — misleadingly, it turns out—that industries with larger increases in trade exposure during the sample period of 1991 to 2007 did not exhibit significant falls in patenting. Once the researchers account for preexisting trends in just these two sectors—computers and chemicals—the adverse impact of trade exposure on industry patenting becomes strongly apparent and can be precisely estimated.

While manufacturing employs less than a tenth of U.S. private nonfarm workers, it accounts for two-thirds of the country's research and development spending and corporate patents. "The relationship between competition in the global marketplace and the creation of new products and production processes is thus one of immense importance for the U.S. economy," they write.

The researchers ask why corporations do not spend more on innovation in the face of mounting Chinese imports. One possibility is that firms assume increased competition will lead to a permanent decline in the profitability of their market sectors, giving them little incentive to invest. Another is that American consumers, accustomed to low-cost Chinese goods, have become less inclined to pay more for innovative alternatives. A third possibility is that as American companies shifted their factories to lower-cost countries while keeping R&D at home, the geographic separation impeded the coordination that helps fertilize innovation.

"Each explanation has important implications for both policy and our understanding of the impact of trade on economic performance," the researchers conclude.