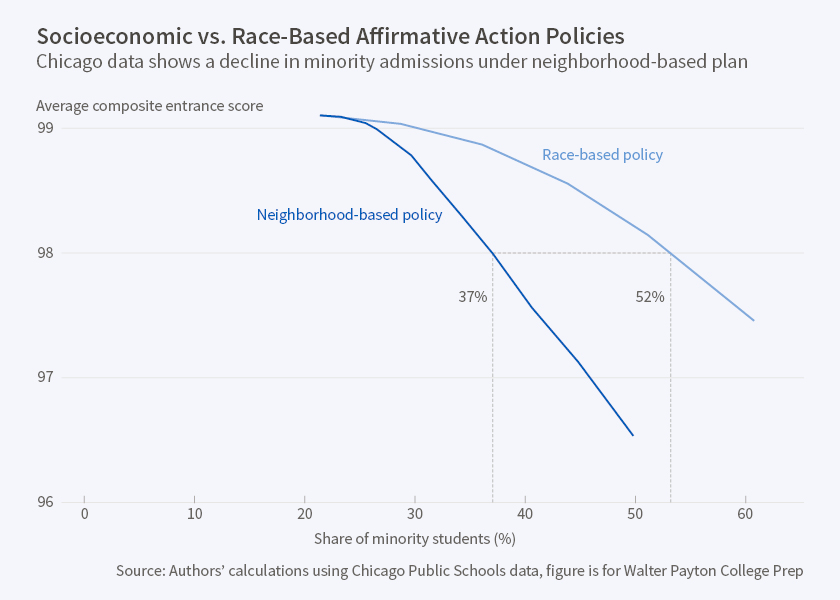 Researchers Glenn Ellison and Parag A. Pathak examined the new Chicago policy in part because it "is held up as a national model for achieving racial and ethnic diversity in selective public schools."

They found that, judged against race-based affirmative action programs, the neighborhood-based program imposed a substantial cost on academic credentials. Their research is presented in The Efficiency of Race-Neutral Alternatives to Race-Based Affirmative Action: Evidence from Chicago's Exam Schools (NBER Working Paper No. 22589).

In 2010, the highly competitive Chicago exam high schools switched from a system that capped the number of white students in each school to a system that based admissions in part on the socioeconomic status of the city's neighborhoods. Every census tract in the city was assigned to one of four tiers, each containing roughly the same number of school-age children.

Northside and Payton high schools, on which the researchers focused, had the most rigorous admission criteria in the city. Admissions policies reserved the first 30 percent of slots for applicants who had achieved the highest composite scores, as derived from grades and the results of several tests. After that, slots were divided equally among the four tiers, going to the highest-scoring remaining students living in the census tracts assigned to each tier. Thus a lower-scoring student residing in a tier with few high-scoring students could be admitted over a higher-scoring student from a tier with overall stronger students.

The researchers found that higher-scoring students were more likely to be displaced under this race-neutral plan than would have been the case under the racial quota system. Diversity was achieved through the new system at greater sacrifice to academic standards than under racial quotas. The study found that even if all the slots were allocated under the tier process, the two schools still would not obtain 50 percent minority representation. By contrast, a race-based plan would have cleared that bar while keeping average student composite scores at 98 on a scale of 0-100. The tier-based process also led to a larger academic gap between majority and minority students than did the race-based one.

The inefficiency of the neighborhood tier-based process was less pronounced at Payton—which is more centrally located and closer to heavily minority neighborhoods—than at Northside. But Payton still would have achieved much greater diversity under a racial quota sys-tem. The tier policy produced a class that was 37 percent minority and had an average composite score of 98. By contrast, a race-based policy could have led to a class that was 52 percent minority with the same average composite score. The tier-based program also produced a less economically diverse class than would one using racial quotas, based on an analysis of students who received free or reduced-price lunches.

The researchers conclude that "eliminating race-consciousness in admissions comes at a cost."