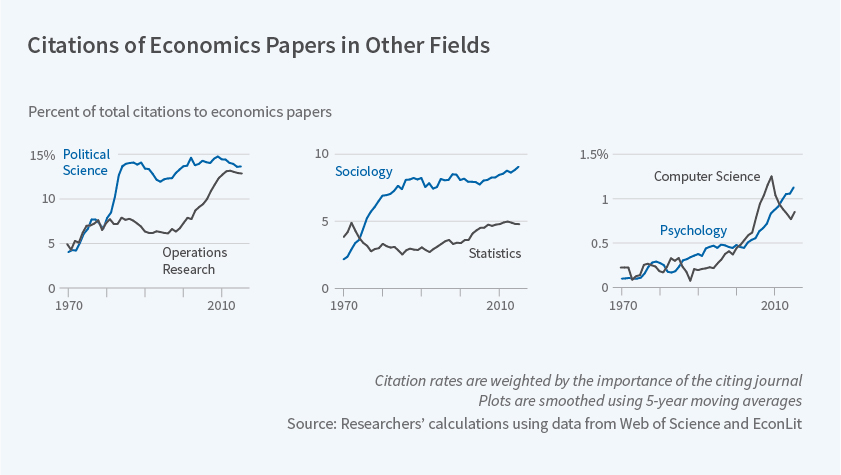 Other disciplines increasingly cite economics, and vice versa. This development parallels a rise in the importance of empirical work in economics.

Economics is sometimes described as an isolated field that interacts little with other academic disciplines. In Inside Job or Deep Impact? Using Extramural Citations to Assess Economic Scholarship (NBER Working Paper No. 23698), Joshua Angrist, Pierre Azoulay, Glenn Ellison, Ryan Hill, and Susan Feng Lu ask whether this perception is accurate, and how the reality of economics' interdisciplinary interactions has evolved.

To measure the conversation between economics and other disciplines, the research team used "extramural" citations as a yardstick: how often papers in the journals of one discipline (such as the American Economic Review) were cited in the journals of another (such as the American Sociological Review). They used the Web of Science database, which records most academic journal citations, and studied the period 1970-2015. Their analysis considers only disciplines that rely on academic journals to disseminate scholarship.

No single field within economics is responsible for its greater extramural presence. Indeed, economics' extramural influence is boosted by the fact that different disciplines find something useful in different parts of the field.

For example, in the 1970s and 1980s, only one of the top 10 most cited economics papers was empirical, while, by the 2000s, six out of 10 were. The researchers hypothesize that empirical economics research has grown in quality as well as quantity. At the same time, they note that some disciplines in which the influence of economics scholarship is growing, most notably computer science and operations research, have been and remain focused on economic theory.