Competition and Search in Internet Markets for Used Books 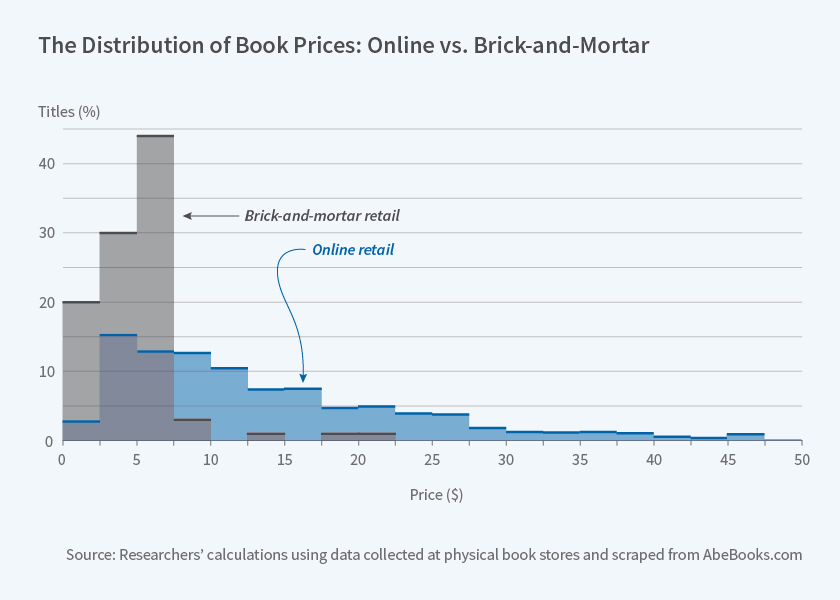 The advent of the online market for used books has raised prices but improved welfare for both sellers and buyers, especially where unusual titles are concerned.

Online shopping has become ubiquitous. Has this raised profits or raised consumer welfare? Both, at least in one market. In Match Quality, Search, and the Internet Market for Used Books (NBER Working Paper No. 24197), Glenn Ellison and Sara Fisher Ellison find that digitization of the used book market increased prices and price dispersion in online relative to offline sales. Profits on used books were 80 percent higher online, but the higher prices facing buyers were more than compensated for by the expanded access to hard-to-find volumes that the internet provided.

By visiting physical bookstores in 2009, the researchers created a sample of 335 books. They then collected online prices for the same titles in 2009 and in 2012. Contrary to what many might have expected, they found that the used books were typically more expensive online than in brick-and-mortar stores: the average online price was about $20, while the equivalent offline price was roughly $11. There was also a lot of dispersion in the online prices. The accompanying figure provides one illustration: online prices for what the researchers call "standard" titles — fairly obscure, typically out-of-print books — were much higher and much more dispersed than offline prices.

Normally, price dispersion is interpreted as a sign that markets are not working well, and higher prices are interpreted as evidence that buyers are worse off. But the researchers note that neither is necessarily true. They point out two avenues through which the rise of internet markets and the associated availability of online search technologies could affect prices. Better search technologies could lead to buyers being better informed, inducing sellers to reduce prices in an attempt to win business. This is the "competition effect." Online markets could also make it easier to find products with unique value to a specific buyer — an increase in match quality. For example, a buyer searching for a specific 15-year-old used book may have a hard time tracking it down at a brick-and-mortar store. The internet facilitates search, thereby increasing demand for unusual titles. The latter effect benefits buyers, but will also tend to increase prices. Knowing only that average prices are higher online does not permit any conclusion about whether this is because the "competition effect" was small or the "match effect" was strong enough to offset increased competitive pressure.

To explore the hypothesis that both effects are important in the used book market, the researchers examine how price levels and price dispersion vary across different types of used books and over time, looking for patterns that would be expected if match quality effects were important. They find several different pieces of evidence consistent with the view that price increases reflect match-quality improvements and that search technologies have made consumers more informed. For example, they looked separately at what they termed "local interest" books — books about the history or geography of a specific area or otherwise associated with that area. They noted that brick-and-mortar bookstores in those areas had high prices for these books relative to online sellers, consistent with the notion that brick-and-mortar stores were already providing about the best match quality one could imagine for such books.

Whether buyers' welfare is higher or lower in the online market depends on the strength of the match quality effect. To address this issue, the researchers develop a model of competing sellers of unusual items, and infer important quantities like the rates at which potential consumers are arriving and the magnitudes of potential gains from selling to well-matched consumers. They use the price data they collected as well as sales data they inferred from disappearances of specific online listings in sequential data gatherings. The researchers estimate that per-bookseller revenues were 80 percent higher online than offline in 2009, due to both higher prices and a higher likelihood of sale. And, more strikingly, they estimate that the consumer welfare gains are not only positive, but roughly equally as large. In the case of the used book market, they therefore conclude that moving online has been a win-win process for sellers and buyers. More generally, the paper suggests that match quality may be an important and underappreciated source of welfare gains from online sales.

Match Quality, Search, and the Internet Market for Used Books