An Evaluation of Agent-Intermediated Microloans in India 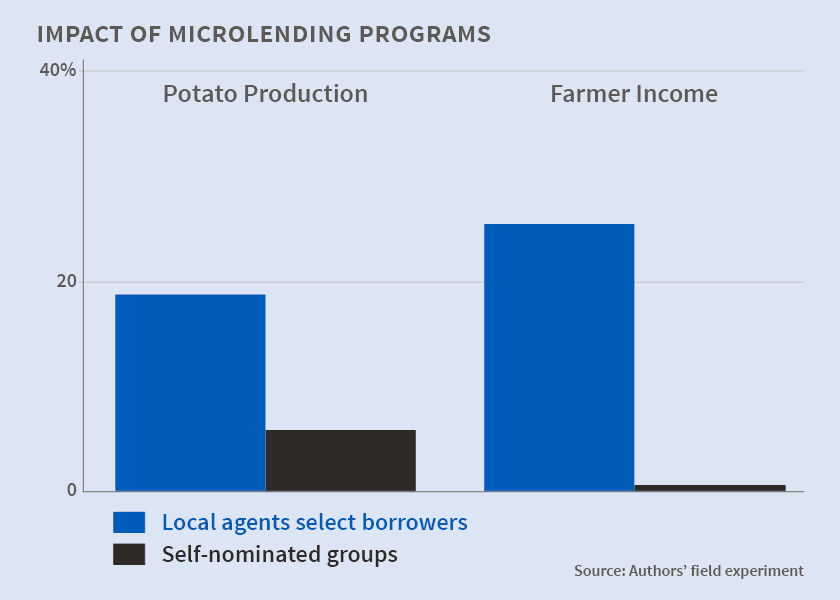 In recent years, the concept of "micro-lending" or "micro-financing," has held out hope that small loans to borrowers who lack access to formal financial institutions could improve economic well-being in impoverished areas of developing economies. This possibility has been called into question by a number of studies suggesting that traditional microcredit does not necessarily lead to higher productivity and incomes for poor farmers and entrepreneurs.

In Financing Smallholder Agriculture: An Experiment with Agent-Intermediated Microloans in India (NBER Working Paper No. 20709), Pushkar Maitra, Sandip Mitra, Dilip Mookherjee, Alberto Motta, and Sujata Visaria argue the problem may lie with how borrowers are selected and how traditional microloan deals are structured. In a field study in the West Bengal region of India, they found that crop yields and income of potato farmers increased when local trader-lender agents were given authority to select borrowers for individual-liability loans.

Many traditional microfinance programs employ a variation of a scheme called Group-based Lending (GBL), which effectively requires a group of self-selected borrowers to band together to take on joint responsibility and liability for loans. Though attractive in some respects, GBLs can have drawbacks, such as the frequent meetings agents and borrowers must attend to verify a loan plan's progress, a process that drives up administrative costs and consumes the time of participating farmers. The authors also note that, in joint-liability programs, peer pressure from group members can discourage borrowers from expanding the scale of borrowing and taking risks, and there is no mechanism to screen out unproductive borrowers.

The authors explore a new mechanism called Trader Agent Intermediated Lending (TRAIL) for selecting farmers with small landholdings to receive unsecured individual-liability loans for agricultural working capital. Randomly selected agents, who would get commissions based on the repayment of interest from loans, would recommend potential borrowers from their own village networks whom they believed were the most promising and low-risk recipients for loans. The agents then would not be involved in the actual financial transactions between the lender and borrowers. In turn, farmers who were recommended by the agents would be randomly selected by the lender to take part in TRAIL programs. The authors evaluated the impact of the program by comparing outcomes for farmers who were randomly selected to take part with outcomes for those who were not.

In a field experiment conducted in 48 villages in two districts of West Bengal during 2010-12, the authors implemented and assessed the results of TRAIL programs in 24 villages and GBL programs in the other 24 villages.

They found that TRAIL loans increased cultivation of potatoes, the major cash crop in the region, and farm incomes by 17 to 21 percent, while GBL loans had only "insignificant and highly dispersed effects." The authors argue that TRAIL agents, motivated by incentives tied to the loan-repayment structure, tended to select borrowers they were familiar with and considered low-risk and productive in general. The borrowers were motivated by promises of lower credit costs and future increased credit access based on their crop performance and loan repayment record.

For TRAIL borrowers, the authors estimated a rate of return on investments in potato cultivation of between 70 and 115 percent. "In contrast we do not find that increased expenditure on cultivation resulted in an increase in output for GBL borrowers," the authors say.

In addition, the average repayment rate at the end of two years was 98 percent for TRAIL loans and 91 percent for GBL loans.

"These results indicate that the TRAIL scheme successfully harnessed local network relationships between loan agents and borrowers to create a 'win-win' situation where both borrowers and agents benefitted, while generating high loan take-up, high repayment rates and lower administrative costs," the authors conclude.

Financing Smallholder Agriculture: An Experiment with Agent-Intermediated Microloans in India