Taxation and the Mobility of Inventors and Scientists 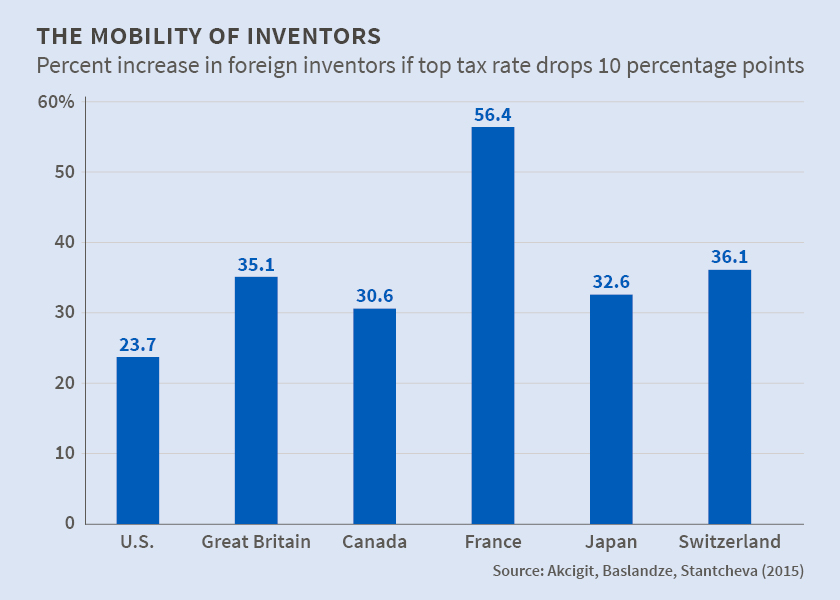 Inventors are a highly mobile group, according to data from the World Intellectual Property Organization. Some of the most successful inventors in U.S. history—Alexander Graham Bell, James L. Kraft, Ralph Baer, and Samar Basu, for example&mdash were immigrants. What determines the migration patterns of inventors? Do tax rates matter? The fear of a "brain drain"—the exodus of inventors and other value-creating individuals in response to progressive tax rates—has led to a vigorous public debate regarding the taxation of high-income households.

Two new NBER studies, one examining movements of inventors internationally, the other looking at similar individuals within the United States, find substantial evidence that tax rates have a significant influence on location decisions. Both studies concentrate on the most successful innovators, and find that the mobility of these individuals is sensitive to tax rates.

In Taxation and the International Mobility of Inventors (NBER Working Paper No. 21024), authors Ufuk Akcigit, Salomé Baslandze, and Stefanie Stantcheva study the effects of taxation on the international mobility of inventors. They put particular emphasis on the location decisions of individuals who have the most patents or the most valuable patents. The authors employ panel data on all inventors who received a patent from U.S. or European patent offices to track international mobility since the 1970s. A very large fraction of worldwide patent filings involve at least one of these two patent offices, so the sample includes most inventors. The authors combine data on where inventors reside, gleaned from the patent filings, with information on the top effective marginal tax rate in each country in each year, to study how taxes affect location choices.

Inventors who have worked for multinational firms appear to be more likely to respond to tax differentials, possibly because working for a multinational makes a move abroad easier and grants the inventor international exposure. On the other hand, inventors whose companies' research activities are highly concentrated in a given country are less sensitive to tax differentials.

In The Effect of State Taxes on the Geographical Location of Top Earners: Evidence from Star Scientists (NBER Working Paper No. 21120), Enrico Moretti and Daniel Wilson study the cross-state location decisions of top scientists in the U.S. Their findings regarding the individual income tax parallel those of the international study, but suggest a greater degree of tax sensitivity. The researchers estimate, for example, that New York State's 2006 reduction of 0.65 percentage points in its top marginal income tax rate was associated with a net increase of 2.1 percent in the number of star scientists in the state. In addition to personal taxes, the authors also study the effect of business taxes, as high business taxes might discourage firms from locating in a state or from growing there. The authors find business taxes, especially the corporate income tax and investment tax credits, have strong effects. When examining the dynamic effects of tax changes, this study finds that the effect on location increases over time, because it takes time for workers and firms to relocate after a tax change. While there are many factors that determine where innovative individuals and innovative companies decide to locate, state taxes play an important role in the U.S.

If inventors and scientists are important contributors to economic growth in their state or country, then their migration in response to tax progressivity is a potential cost of such a policy. These studies may provide broader insights if the mobility of highly productive inventors sheds light on how taxation affects the location decisions of other educated, talented, high-earning workers.

Taxation and the International Mobility of Inventors