The Immigrant as Innovator 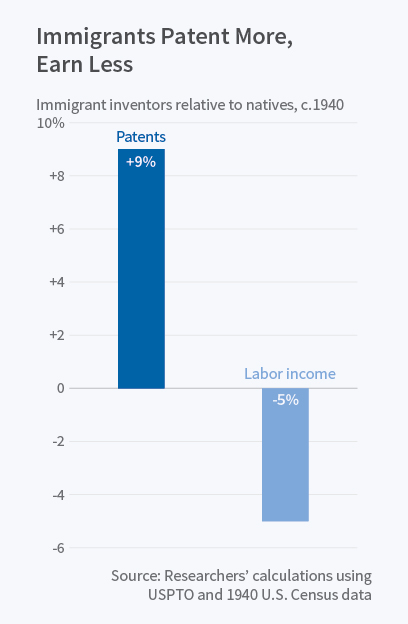 Technology areas where immigrant inventors were prevalent between 1880 and 1940 experienced more patenting between 1940 and 2000.

Immigrants are over-represented, relative to their population shares, among those who receive patents and develop new technologies. In Immigration and the Rise of American Ingenuity (NBER Working Paper 23137), Ufuk Akcigit, John Grigsby, and Tom Nicholas examine the long-run links between immigration and innovation. They find that talented immigrant inventors often have paved the way for long-term innovation, while receiving significantly lower compensation than their native-born counterparts.

Using U.S. Patent and Trade Office and U.S. Census data, the researchers study the "golden age of U.S. invention," the period from 1880 to 1940. Some immigrant inventors, like the Scottish-born Alexander Graham Bell, made direct innovative contributions. Others made "spillover" contributions, such as those of the Chicago-based French engineer Octave Chanute to the work of Wilbur and Orville Wright. The researchers geographically track where immigrant inventors worked, as well as the geographic and patent classes of their filings. After 1940, when the Census began recording information on wages and income, they also consider the earnings of inventors.

Technology areas where immigrant inventors were prevalent between 1880 and 1940 experienced more patenting and citations between 1940 and 2000 than other sectors. This finding suggests that there are broad long-run macroeconomic effects of inventions and innovation.

In the ten most inventive states, measured by the average number of patents per capita between 1880 and 1940, international migrants comprised about one-fifth of the population, compared with less than 2 percent in the least inventive states.

The researchers found that foreign-born inventors, the vast majority of whom came from Europe in the late 1800s and early 1900s, tended to cluster in the Northeast and upper-Midwest regions of the U.S. and were noticeably absent in southern states. Though they were often associated with then cutting-edge fields like chemistry and electricity, they were also involved in other tech areas, such as medical technology.

The researchers note that while they study a historical period, the role of immigrants in U.S. innovation is even greater today. While immigrants accounted for 19.6 percent of inventors during the period they reviewed, today the share is about 30 percent.

Immigration and the Rise of American Ingenuity