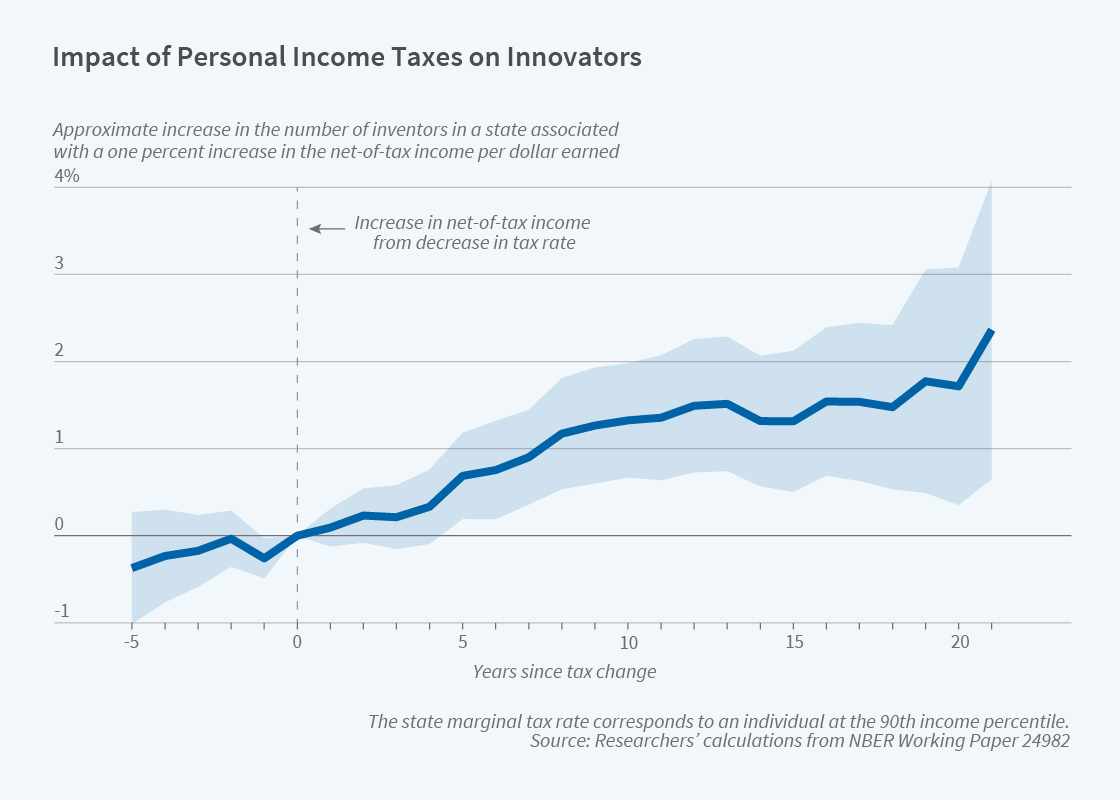 In The Effects of Taxes on Innovation: Theory and Empirical Evidence (NBER Working Paper 29359), Stefanie Stantcheva investigates whether income taxes constrain innovation, a key driver of entrepreneurship and long-term growth. She notes that while inventors may be motivated by a love of science or a desire for recognition, they also face standard economic incentives. Taxes reduce the returns to investments in innovation, which can lead to reductions in those investments.

High individual income tax rates are associated with a decline in the number of inventors and the rate of innovation, a finding that affects the equity-efficiency balance in tax design.

Stantcheva studies the way income tax rates on innovation and entrepreneurship affect the equity-efficiency trade-off when setting tax rates. She finds that the tax rates that balance equity gains with efficiency costs are sensitive to the size of spillovers from innovation to economic growth and to the responsiveness of such spillovers to taxes. The more broadly the economic gains from innovation are distributed across the economy, the greater the downward pressure on marginal tax rates on income from innovation. If innovators who generate these positive spillovers are themselves very sensitive to taxes, this is a further reason to lower the tax on innovation. The research suggests that in some cases, if the government could set different tax rates for innovators and for others, it is possible that innovators would be subsidized, not taxed.

Stantcheva next surveys existing empirical evidence of taxes’ effects on innovation. She draws particularly on prior collaborative work with Ufuk Akcigit, John Grigsby, and Tom Nicholas (NBER Working Paper 24982) that combines individual-level data on all patented inventors since 1920 with state-level tax rates over this period. This study finds that higher income tax rates are associated with lower rates of innovation. When a state lowers its marginal income tax rate on top earners, for example those at the 90th percentile of the national earnings distribution, and thereby increases the earners’ net-of-tax income by 1 percent, the annual number of patents in a state rises by up to 1.8 percent. The effect is even larger, a 2.8 percent rise in the patent count, for a similar-sized drop in the corporate income tax rate. Higher individual income taxes appear to reduce the likelihood that inventors report any patents, and the likelihood of filing a “home run” patent with many citations or substantial firm value. On average, however, taxes do not change patent quality.

The prior research also finds that taxes affect where innovators choose to locate, both across American states and internationally. A 1 percent increase in a state’s net-of-tax income retention rate for high earners increases the number of inventors living there by about 0.34 percent. Corporate inventors move only in response to corporate income taxes, while noncorporate inventors respond to both corporate and personal income tax rates.

Stantcheva emphasizes that while broad-based personal and corporate income taxes affect innovation, they are blunt tools for fostering innovation when compared to subsidies for research and development or innovator-specific income tax schedules — provisions that reduce tax rates on income from the license or use of intellectual property.

The Effects of Taxes on Innovation: Theory and Empirical Evidence
Taxation and Innovation in the 20th Century