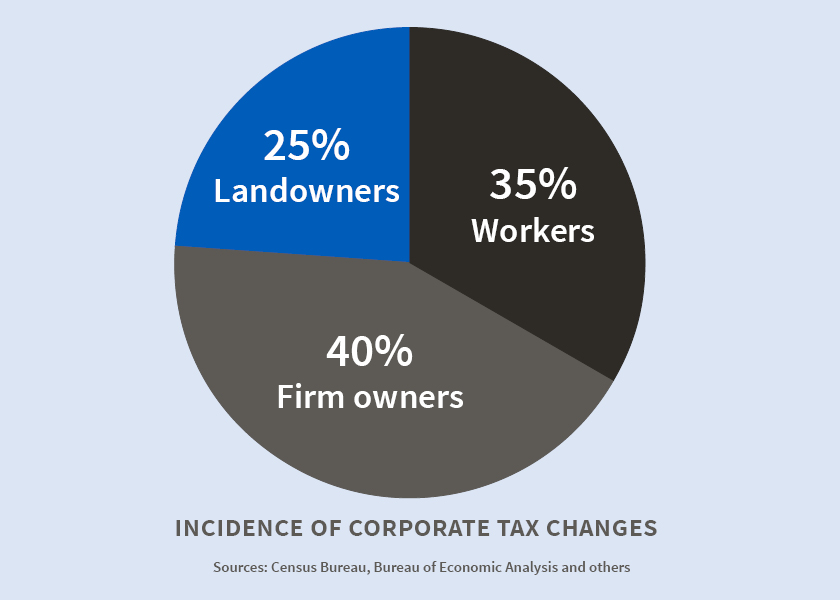 ...40 percent of the economic benefits accrue to companies and their shareholders, 35 percent to workers, and 25 percent to landowners.

State-level policymakers often adjust corporate income-tax rates to keep or lure businesses. Many of these changes are enacted without full understanding of the impact such tax moves and economic incentives have on companies, workers, and landowners.

In Who Benefits From State Corporate Tax Cuts? A Local Labor Markets Approach With Heterogeneous Firms (NBER Working Paper No. 20289), Juan Carlos Suárez Serrato and Owen Zidar find evidence that 40 percent of both the economic benefits of corporate-tax rate reductions and the costs of tax increases accrue to companies and their shareholders, while 35 percent accrue to workers and 25 percent are received by landowners.

The standard analysis of corporate income taxes levied by small jurisdictions like states holds that such taxes are not likely to burden footloose firms, but will ultimately reduce wages and land values in the jurisdiction. In their study, Suárez Serrato and Zidar develop a new framework in which firms derive benefits from operating in particular localities, and so can’t easily move in response to changes in the level of corporate taxes in a state. A classic example is Silicon Valley firms that feel they need to operate in that region to take advantage of the concentration of skilled workers and capital.

Using data from the U.S. Census and various other sources, the authors estimate how state-level corporate income taxes - which are complex and are apportioned across states using apportionment formulae that depend on the level of sales, employment, and fixed assets in each state - affect employment and the number of establishments in the state. They find that a 1 percentage point cut in a state's corporate tax rate is associated with a 3 to 4 percent expansion in the number of establishments over a 10 year period. Corporate tax hikes are correspondingly associated with slower growth in firm numbers.

The authors go on to estimate how the burden of state-level corporate income taxes ultimately affects the returns earned by corporations and their shareholders, the wages received by workers who live in a state, and landowners in the state.

"Our main result is that firm owners bear a substantial portion of the incidence of corporate taxes in an open economy," the authors conclude.