How Top Earners Make Money: Often, from Running a Business 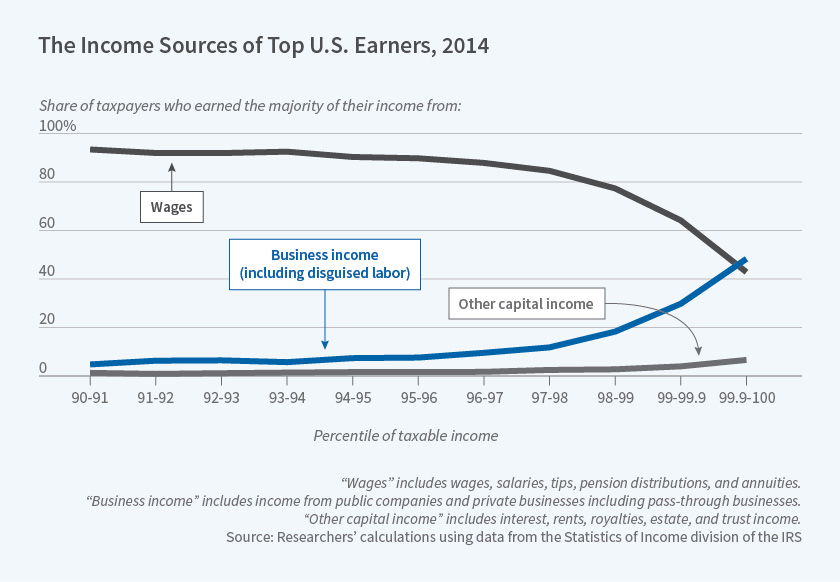 More than 70 percent of the human-capital rich are under age 60. They own mid- size companies in the white-collar, skilled service industries or in regional trade.

Indeed, even among households in the top 0.1 percent of the income distribution, most receive more income from their human capital than from their financial capital, according to Capitalists in the Twenty-First Century (NBER Working Paper No. 25442) by Matthew Smith, Danny Yagan, Owen M. Zidar, and Eric Zwick. That human capital income may reflect socially beneficial hard work or socially harmful rent capture and uncompetitive behavior.

The primary source of top income is usually not recorded as wage income, however, but as tax-favored private business profit. The researchers estimate that 75 percent of the business profits reported by this group can be attributed to human capital — namely, returns on business owners' intellectual and physical efforts, whether socially beneficial or not — rather than financial capital investments. They derive this figure by comparing the performance of firms that have lost their owners through retirement or premature death with that of comparable firms that have not experienced these shocks.

IRS changes dating back to the 1980s provide an incentive for owners of pass-through businesses — partnerships and S-corporations — to receive income as business profits rather than wages. To the extent that pass-through profits are in fact disguised wages, they can distort traditional measurements of labor and capital income. Today, up to the 99th percentile of the income distribution, wage income dominates. At the very top of the distribution, in the top 0.1 percent, business income is more important than either wage income or investment returns. In this elite group of households, fewer than 13 percent rely primarily on interest, rents, and other capital income.

Who are the human-capital rich? More than 70 percent are under age 60. They own mid-size companies in the white-collar, skilled service industries. Near the top — the 99th to 99.9th percentile — they typically own single establishments that offer consulting, legal, medical and other highly specialized services. Among the top 0.1 percent, above the 99.9th percentile, the typical company is an auto dealership, beverage distributor, or large law firm.

The researchers acknowledge that elite earners could be erroneously labeled as human-capital rich if they are drawing money from a family-owned pass-through company as a way of avoiding estate taxes. To identify top earners who are unlikely to be wealthy heirs, they examine the earnings of parents of top earners born from 1980 to 1982. Children whose parents were in the bottom 99 percent of the income distribution are unlikely to be wealthy heirs. The researchers find that most young top earners are children of parents from the bottom 99 percent, so their results are unlikely driven by erroneously labeled wages of wealthy heirs.

The growth of income from pass-through entities has contributed to widening income inequality in the last two decades. The profits of pass-through owners rose during the 2001–14 study period, as they benefited both from increased labor productivity and from their widening share of the value added by their workforces. In other words, owners claimed an increasingly large slice of a growing pie. Among top 1 percent firms, that slice grew from 37 percent to 48 percent; for top 0.1 percent firms, it grew from 40 percent to 52 percent.

Capitalists in the Twenty-First Century