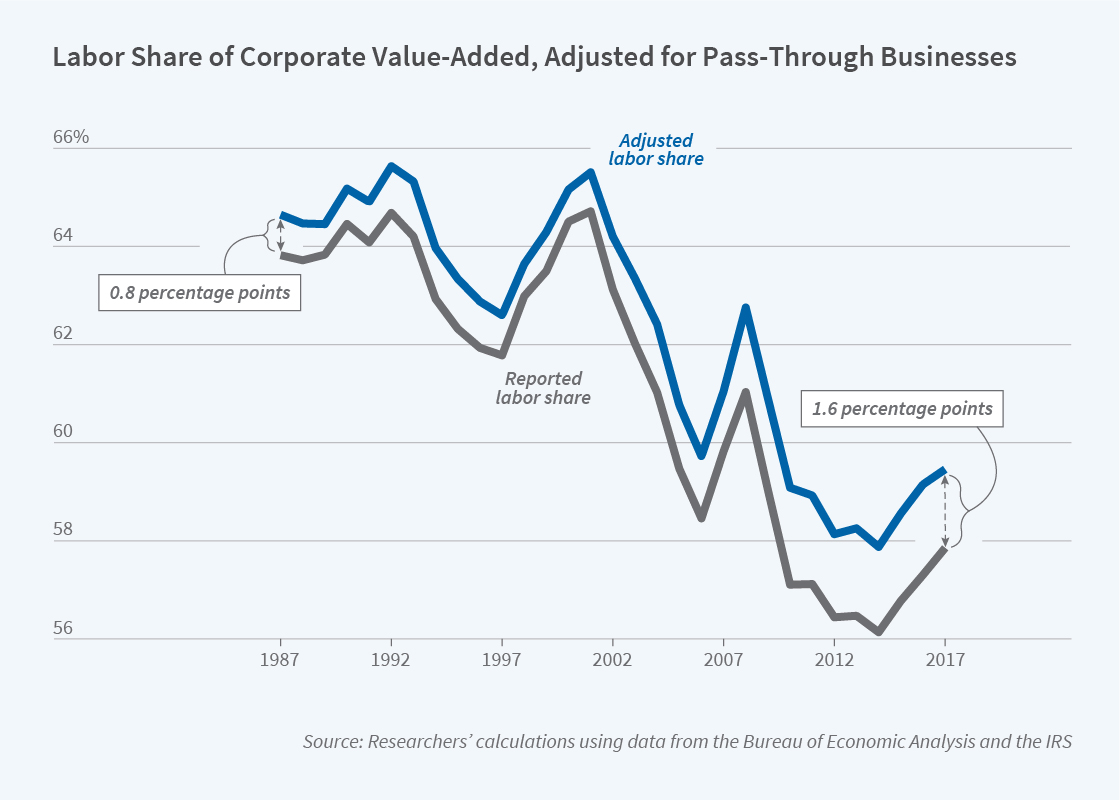 Accounting for growth in pass-through businesses attenuates the decline in labor’s share of corporate value-added by nearly a third.

Over the last 40 years, labor’s share of corporate value-added in the US national income accounts has declined from about 63 to about 58 percent. In The Rise of Pass-Throughs and the Decline of the Labor Share (NBER Working Paper 29400), Matthew Smith, Danny Yagan, Owen M. Zidar, and Eric Zwick find that about a third of this decline may be the result of growth in the share of income generated by pass-through businesses in recent decades and in the way the owners of these businesses have structured their compensation.

A series of tax changes that reduced personal income taxes and increased the tax burden on non-pass-through C-corporations, starting with the passage of the Tax Reform Act of 1986, increased the incentive for business owner-managers to draw more of their compensation as profits and less as wages. The response of owner-managers to this incentive affected the measured labor share in the national income accounts, but not the underlying command over resources by labor and capital owners.

C-corporations calculate profits after deducting wages, salaries, and allowable expenses. In 2017, they paid a 35 percent corporate income tax on their profits. When C-corporations distribute their profits to their owners as dividends, the profits are taxed again as dividend income. For households, investment income tax rates ranged from 15 to 23.8 percent. High-income C-corporation owner-managers could reduce their total tax burden by 7.1 percentage points by paying themselves wages, with a top federal tax rate of 43.4 percent, rather than receiving dividends, with a top tax burden of 50.5 percent inclusive of corporate and individual income taxes.

In contrast to C-corporations, pass-through businesses, typically S-corporations or partnerships, do not pay corporate income taxes. Their profits pass through to owners in the year they are earned and are taxed at each owner’s individual tax rate. In 2017, high-income S-corporation owners could reduce their total tax burden by 3.8 percentage points by taking their compensation as profits rather than wages. Owner-managers of partnerships receive most of their compensation as profits. These partnerships are predominately service-sector firms in law, consultancy, and financial services that require smaller amounts of capital and have higher labor shares of income than businesses that have retained the C-corporation form.

To estimate how the growth of the pass-through sector has contributed to the reported decline in the labor share, the researchers reclassified a portion of S-corporation value-added as labor income. The reclassification was based on data from 183,000 firms that switched from C-corporation to S-corporation status between 2000 and 2012. By merging firm-level business income tax returns with owners’ W-2 wage payments, the researchers estimate that 1.2 percent of aggregate S-corporation sales should be characterized as labor payments. This change increases the 2017 corporate-sector labor share in the national income accounts by about 0.9 percentage points. Applying a similar adjustment to partnership compensation further increases the adjusted labor share. Overall, adjusting for pass-through growth raises the labor share of corporate-sector value-added by 1.6 percentage points.

The growth of the pass-through sector over time has contributed to a growing disparity between the reported labor share in the national accounts and the adjusted measure, the researchers conclude.