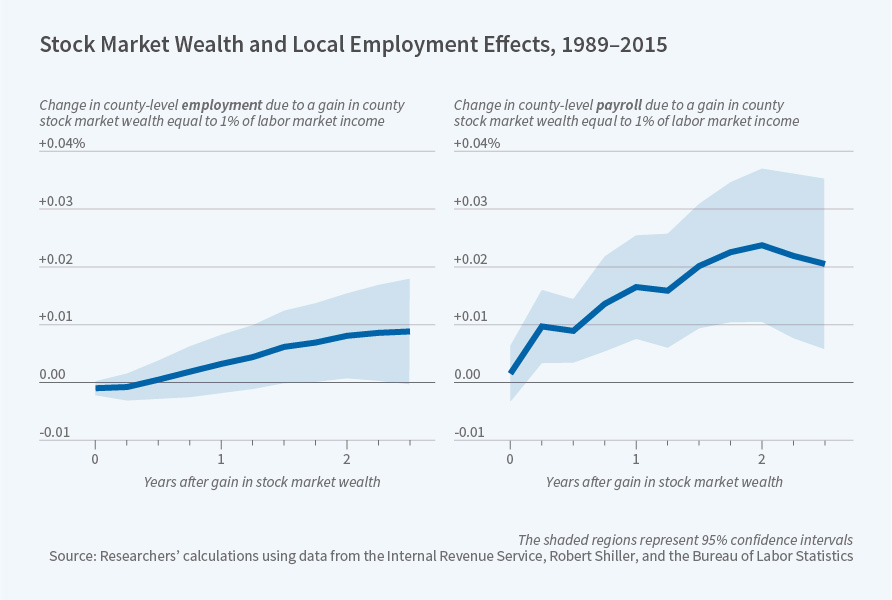 The "wealth effect" is the notion that when households become richer as a result of a rise in asset values, such as corporate stock prices or home values, they spend more and stimulate the broader economy. While well-grounded in theory, it has always been difficult to estimate the magnitude of the wealth effect, because changes in asset prices rarely occur without other macroeconomic changes.

The researchers solve the problem of measuring the wealth effect by taking advantage of geographic variation in stock market holdings within the United States. They estimate stock market wealth for each county, using anonymized dividend income data from tax returns. They link that information to the returns on the S&P 500 index to estimate a quarterly, county-level stock market wealth shock that they then merge with payroll and employment data from the Quarterly Census of Employment and Wages.

The researchers find that in addition to greater consumer spending, a rise in a county's stock market wealth is associated with increases in local employment and payrolls. To gain a clearer understanding of the channels through which the stock market wealth effect operates, they break down the employment effects into industries they call "tradable" — goods-producing sectors such as agriculture, fishing, mining, oil extraction, and manufacturing, and "non-tradable" — such as food services and retail sales. Consistent with economic theory, they find that both employment and payrolls go up in non-tradable industries, but that there is no response of employment in tradable industries. They also find that the residential construction sector is highly responsive to rising stock market wealth.

The researchers decompose the effects of rising stock market values on economic activity into the product of stockholders' marginal propensity to consume — how much of an extra dollar of wealth they spend — and the Keynesian multiplier for the local economy. This multiplier is a measure of how much a one-dollar increase in spending will ultimately raise economic activity; it recognizes that the new spending induces follow-on spending by those who benefit from the initial boost.

The researchers note that the aggregate, or national, impact of stock market wealth shocks could be greater than their local economy estimates suggest, because the Keynesian multiplier is likely to be larger in the aggregate than at the local level.