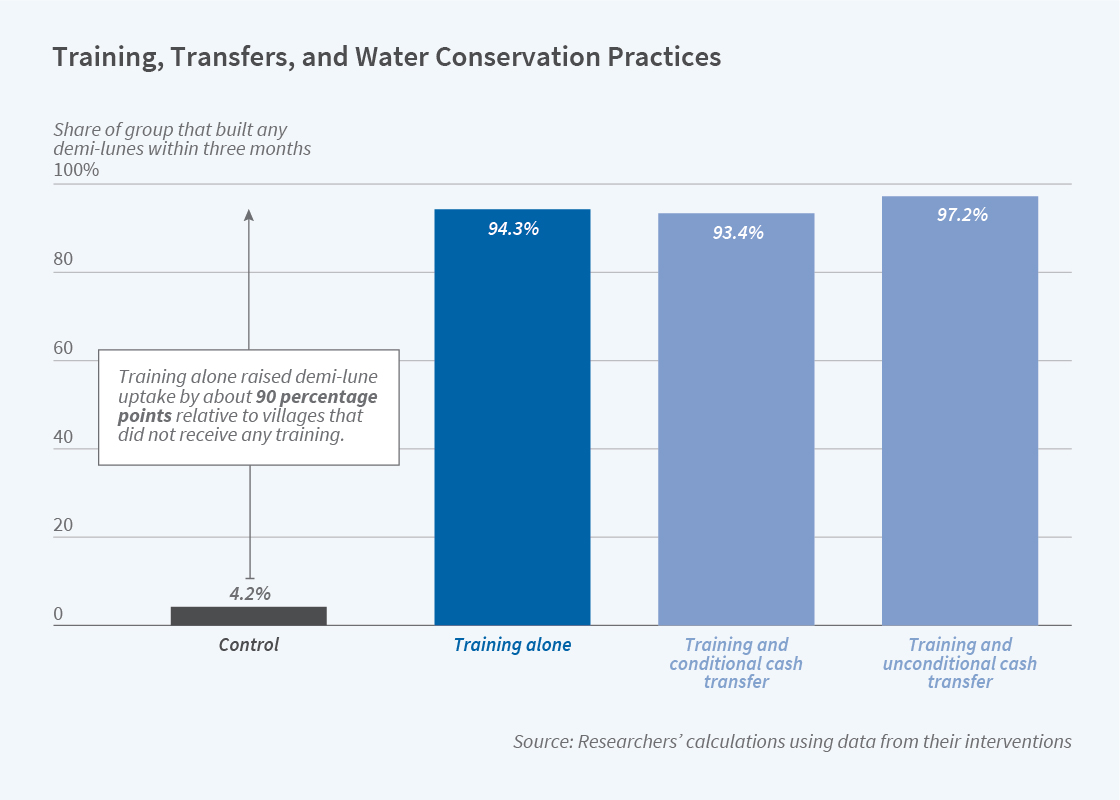 Simple training can be a cost-effective and scalable way to promote the adoption of profitable and sustainable agricultural technologies.

In Harvesting the Rain: The Adoption of Environmental Technologies in the Sahel (NBER Working Paper 29518) Jenny C. Aker and Kelsey Jack study the barriers to smallholder farmers’ adoption of sustainable technologies. They focus on a technique called rainwater harvesting (RWH) that helps reduce land degradation and restore soil fertility in Niger. Overall, they find that training, which is a low-cost policy intervention, increases the share of farmers adopting the technology by over 90 percentage points. Training matters more than cash incentives for technology adoption; neither conditional nor unconditional cash transfers have any additional effect on the probability of adoption.

In the Zinder region of eastern Niger, where the study was done, the adoption of RWH is low. The researchers consider several potential explanations for this, including the considerable upfront labor investment this technology requires, limited cash-on-hand liquidity, and high discount rates.

To analyze technology adoption, the researchers assigned small-scale farmers in 180 villages to one of four treatment arms or a control group, with treatments designed to relax specific barriers to technology adoption — specifically, to adoption of demi-lunes, a RWH technique in which berms are constructed in and around crops to collect rainfall and runoff. One treatment arm received only training, which included a session on the technical requirements for constructing demi-lunes. The other treatment arms received some type of cash transfer in addition to training. The treatments were administered during the first year, and the researchers collected data for three subsequent years.

All four treatments significantly increased adoption in the short and medium term.

In the first year, farmers in the training arm constructed 35 more demi-lunes than did farmers in the control, and those in the other treatment arms adopted significantly more demi-lunes than farmers who received training only in the first year. But by the third year, adoption levels were indistinguishable across treatments. The researchers conclude that training alone was sufficient to explain all of the medium-term impacts on adoption.

They also find that adoption occurred through a combination of hiring labor and reallocating household labor, that the interventions had significant positive impacts on agricultural production and land use, and that there were significant adoption spillovers within villages. Farmers in treated villages were 50 percentage points more likely to have a neighbor adopting demi-lunes than farmers in control villages.

There are several possible reasons why training was so effective. First, it may have made farmers aware of the existence of the technology. Second, by providing relevant technical advice, it may have increased farmers’ knowledge of how to better construct demi-lunes. Third, organizing farmers into groups during the training may have facilitated social learning during and after the training. It is also possible that the training had an impact on motivation or social norms.

The findings suggest that training can be a cost-effective and scalable means of promoting the adoption of profitable and sustainable agricultural technologies.

Harvesting the Rain: The Adoption of Environmental Technologies in the Sahel