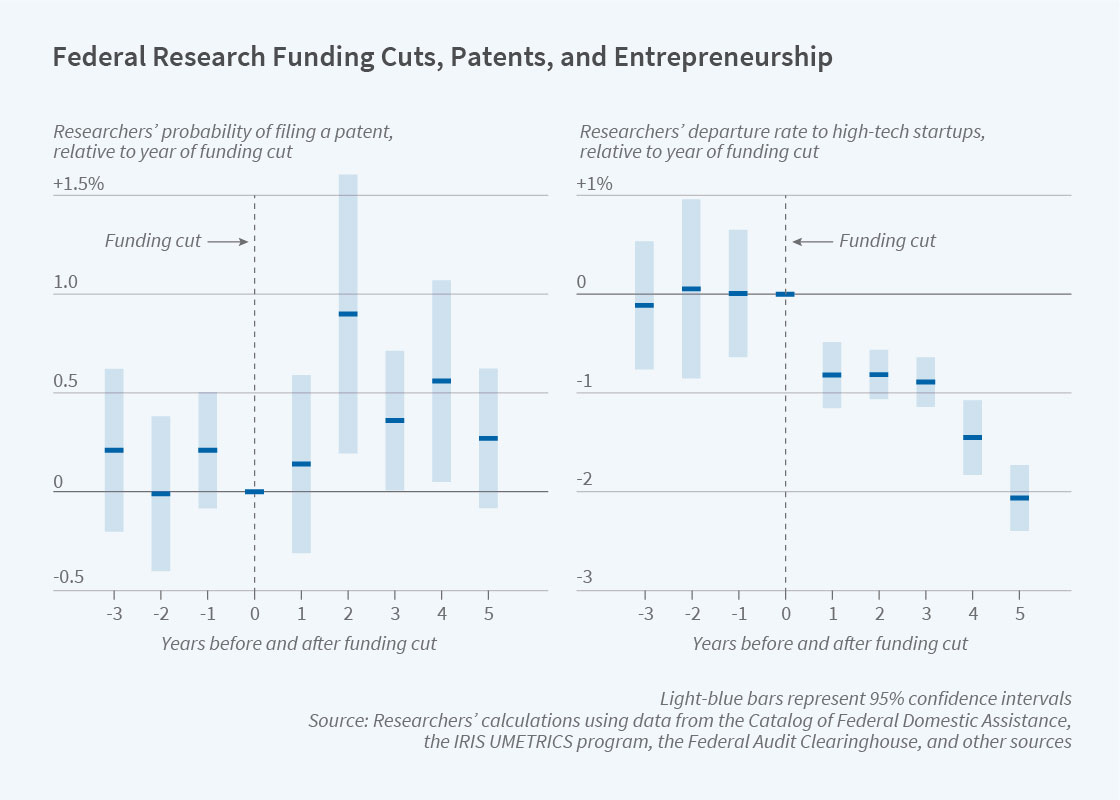 Levels of government and private support for scientific research in the United States have varied over time. Over the last 15 years, government support for university R&D has markedly decreased. Funding sources also vary across research areas, within research areas over time, and even for an individual researcher over time. In The Color of Money: Federal vs. Industry Funding of University Research (NBER Working Paper 28160), Tania Babina, Alex Xi He, Sabrina T. Howell, Elisabeth Ruth Perlman, and Joseph Staudt investigate whether the source of funding — federal versus private — leads to different scientific outputs and different career trajectories for university researchers.

The researchers study a dataset that includes more than 235,000 individuals at 22 universities who received research support between 2001 and 2016. Of these researchers, 44.5 percent were graduate students or post-docs, 28.8 percent were staff members, 19.3 percent were faculty members, and 13.4 percent were undergraduates. They characterize the source of funding for each researcher’s grants, finding that the federal government provided 82 percent of funding and the private sector provided 11 percent (the rest is from other sources).

To assess the effect of an individual’s composition of funding sources, the researchers make use of changes to aggregate federal support in the individual’s research area. They show that changes in ­congressional funding priorities alter the distribution of funds across narrow research fields and thereby influence the supply of federal funding and researchers’ composition of funding sources. The aggregate changes are highly volatile and mean-reverting, and especially for one-time large shocks, they are not correlated with technological opportunities or downstream subsidies.

The researchers find that a 10 percent increase in the share of funding that comes from the federal government caused a 0.4 percentage point reduction in the probability of receiving any patents, about half of the average level. There was no effect on the probability of a highly cited patent, indicating that although federal funding leads to fewer patents, those patents are more highly cited. The federal funding share increased the probability of receiving a general patent, one that is cited across many fields. Consistent with firms being interested in owning the patents produced by their sponsored research, a higher share of private funding substantially increased the probability that a patent had a private assignee. Furthermore, 40 percent of patents with private assignees are assigned to the firm funding the research.

The source of funding also influenced the future careers of graduate students and post-docs. A 10 percent increase in the share of federal funding increased a researcher’s probability of working for a high-tech startup by 0.34 percent, compared with an average probability of 0.74 percent. It also increased the probability of remaining in academia. The effects were strongest in Engineering and Bio/Med/Pharma, and absent in Science and Liberal Arts. In contrast, a higher share of private funding increased the propensity to work at incumbent firms, suggesting that one reason firms may sponsor research is to train or recruit researchers. Consistent with this, one-fifth of the individuals whose research was privately funded and who were subsequently employed at a funder firm worked for the firm that funded their project.

In general, the results demonstrate that private and federal funding are not substitutes. Federal funding keeps researchers on an academic track and “in institutions where they are likely to continue to be involved with academic research.” Their research outputs are less likely to be patented and “more likely to end up in high-tech startups founded by researchers themselves.” Private funding is more often appropriated by the private sector, particularly the funder, while federal funding leads to more open outputs that can more easily transition to startups.

The Color of Money: Federal vs. Industry Funding of University Research