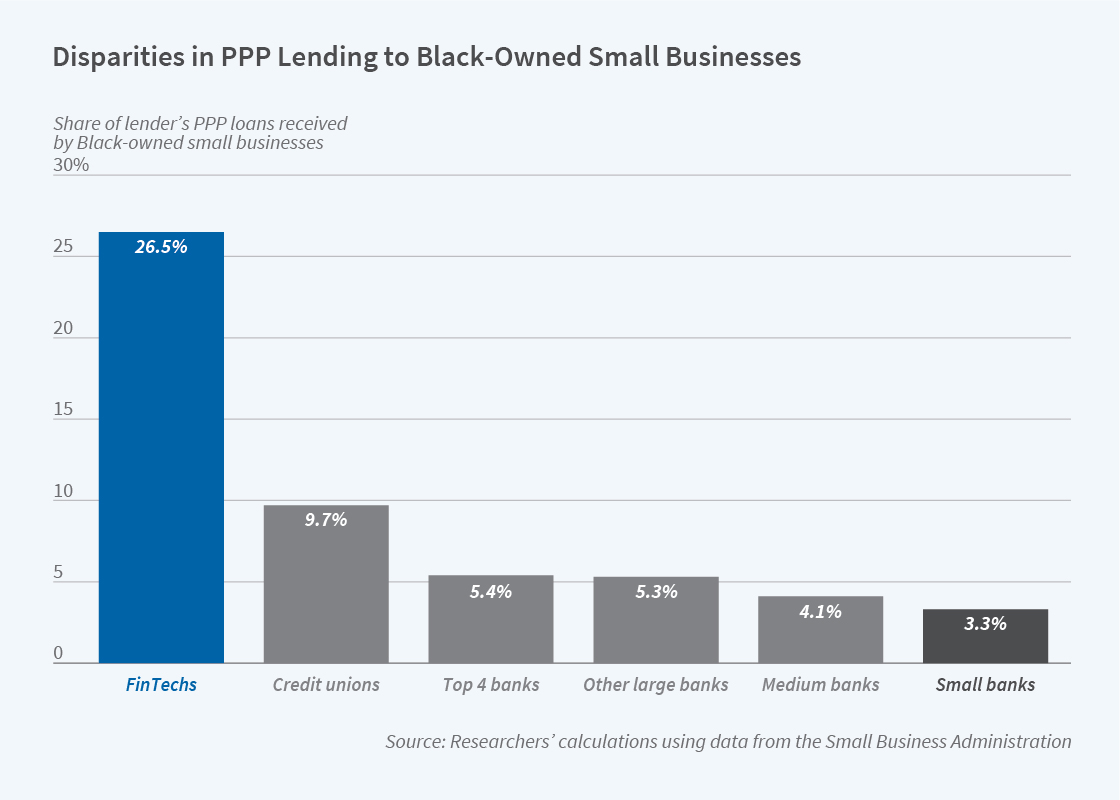 Black-owned businesses were least likely to receive Paycheck Protection Program loans from small and mid-sized banks, where subjectivity was most likely to influence lending decisions.

The Paycheck Protection Program (PPP) was designed to help businesses retain employees as they weathered the COVID-19 pandemic. Private lenders administered PPP loans at virtually no risk to themselves, as the loans were federally guaranteed. In Racial Disparities in Access to Small Business Credit: Evidence from the Paycheck Protection Program (NBER Working Paper 29364), Sabrina T. Howell, Theresa Kuchler, David Snitkof, Johannes Stroebel, and Jun Wong examine whether racial bias may have affected the distribution of loans under this program.

The researchers found that two-thirds of the lending disparity can be accounted for by differences in business characteristics between Black-owned and other businesses. After controlling for business differences, the study found no significant racial disparity among loans issued by the top four banks. But Black-owned businesses remained disproportionately less likely to obtain their PPP loans from small and mid-sized banks, and more likely to obtain PPP loans from fintech lenders. These differences could not be accounted for by lenders’ preference for extending loans to businesses with which they had preexisting banking relationships, by a preference for businesses with healthier bottom lines, or by differential fraud rates. The researchers also found no evidence that the observed lending disparity was primarily driven by differential propensity of Black-owned firms to seek out loans from fintech firms. To assess the potential role of discrimination, the researchers compared the behavior of small and mid-sized banks based in areas with different levels of “racial animus,” which was measured using the percentage of an area’s Google searches that contained racially charged language, responses to surveys designed to detect prejudice, and the extent of local housing segregation. They found that in regions with higher racial animus, Black-owned businesses were particularly likely to get their PPP loans from fintech lenders, and less likely to get them from small- or medium-sized banks.

Black business owners fared best when seeking PPP loans from sources that relied on automated lending processes commonly used in the fintech sector and by the nation’s largest banks. They fared worst with small and mid-sized banks, where human subjectivity was more likely to influence lending decisions. The researchers directly study the effect of automation by leveraging the fact that, during the PPP loan period, a number of small banks automated their loan origination processes. The share of PPP loans by small banks directed to Black-owned businesses rose substantially after automation, particularly in areas with higher racial animus.

The researchers conclude that machine learning algorithms can level the playing field for borrowers. “While concerns that algorithms may discriminate because they are trained on biased data are warranted,” they write, their results suggest that “by eliminating manual review conducted by biased humans, automation could reduce the incidence of taste-based discrimination.”

Entrepreneurship
Race and Stratification in the Economy