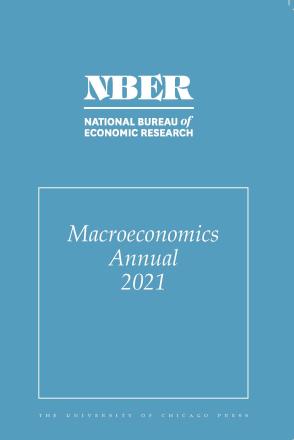 The NBER Macroeconomics Annual 2021 presents research central issues in contemporary macroeconomics. Robert Hall and Marianna Kudlyak examine unemployment dynamics during economic recoveries. They present new empirical findings and explore models in which the labor market gradually draws down the stock of unemployed workers in the aftermath of a downturn. Titan Alon, Sena Coskun, Matthias Doepke, David Koll, and Michèle Tertilt analyze the relative decline in employment of women during the COVID-19 pandemic and the associated global recession. They show that increased childcare needs, which fell more heavily on women, and differences in occupations both contributed. In the case of the US, however, each of these factors account for less than 20 percent of the gender gap in hours worked during the pandemic. Richard Rogerson and Johanna Wallenius study the employment rates of older workers in OECD countries over the last forty years. An expansion of institutions incentivizing retirement, concurrent with negative aggregate shocks between 1970 and 1995, led to falling employment rates. This trend started to reverse in the mid-1990s when many of these institutions, such as public pension programs, were cut back. Michael Barnett, William Brock, and Lars Peter Hansen explore the consequences of risk, ambiguity, and model misspecification in climate policy design. They consider carbon emissions pricing and the effects of different sources of uncertainty—such as future information about environmental damage, uncertainties in carbon and temperature dynamics and damage functions, and the role of future green technologies—on policy design. Michael Kremer, Jack Willis, and Yang You present new evidence suggesting a steady trend toward income convergence across countries since the late 1980s. They find convergence in various determinants of economic growth across countries, and a flattening of the relationship between growth and these determinants. The paper challenges theories of growth arising after earlier rejections of the neoclassical growth model.