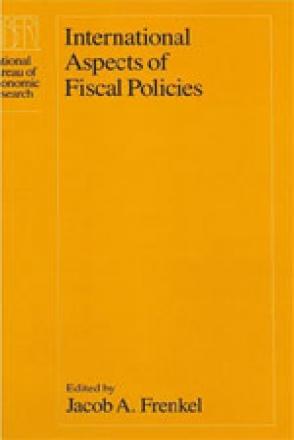 This volume brings together nine papers from a conference on international macroeconomics sponsored by the NBER in 1985. International economists as well as graduate students in the fields of global monetary economics, finance, and macroeconomics will find this an outstanding contribution to current research. It includes two commentaries for each paper, written by experts in the field, and Frenkel’s detailed introduction, which serves as a reader’s guide to the arguments made, the models employed, and the issues raised by each contributor.
The studies analyze national fiscal policies within the context of the international economic order. Malcolm D. Knight and Paul R. Masson use an empirical model to show that fiscal changes in recent years in the United States, West Germany, and Japan have caused major disturbances in net savings and investment flows. Linda S. Kole uses a two-country simulation model to examine the effects of a large nation’s expansion on exchange rates, interest rates, and the balance of payments. In other studies, Warwick J. McKibbin and Jeffrey D. Sachs discuss the influences of different currency regimes on the international transmission of inflation; Kent P. Kimbrough analyzes the interaction between optimal tax policies and international trade; Sweder van Wijnbergen investigates the interrelation of fiscal policies, trade intervention, and world interest rates; and Willem H. Buiter uses an analytical model to look at fiscal interdependence and optimal policy design. David Backus, Michael Devereux, and Douglas Purvis develop a theoretical model to investigate effects of different fiscal policies in an open economy. Alan C. Stockman looks at the influence of policy anticipation in the private sector, while Lawrence H. Summers shows the effects of differential tax policy on international competitiveness.