Intangible capital has become a large and increasingly important part of firms’ capital stocks and assets, especially over the last three decades. Intangibles include data, patents, copyrights, software, audio and video material, brands, and organization capital. Shares of these assets have risen while the share of physical capital, such as plants and equipment, has fallen, despite an increase in profitability and the return to business capital. This shift has occurred in concert with other major trends, including rising industry concentration and weak productivity growth. The research agenda on these trends that I describe in more detail below includes several coauthors, principally Nicolas Crouzet, and more recently, Andrea Eisfeldt and Dimitris Papanikolaou.

In addition to intangibles’ increasing prevalence, we emphasize that they are also fundamentally different from physical capital. Usually, this difference is defined by their lack of physical presence, or intangibility. But that “lack” has important implications.

First, it has traditionally meant that intangibles are difficult to measure and often excluded from accounting frameworks. The difficulty in providing valuations from secondary markets, rapid and uncertain depreciation, and the potential for unexpected obsolescence all contribute to the measurement challenge. At the same time, investments in intangibles create lasting value; coding software, developing algorithms, collecting data, conducting research, and honing methods all incur current costs that create value in the future, which is the defining hallmark of investment.

Nonetheless, lacking a measure of capital, these costs are typically expensed for accounting purposes and the associated capital does not accumulate in firms’ accounting data.1 Thus, productive investment and capital were necessarily undermeasured. The US Bureau of Economic Analysis (BEA) has worked to overcome this deficit by measuring software, R&D, and artistic originals among a limited set of aggregate accounts on intangible capital in the National Income and Product Accounts. Researchers typically create their own firm-level intangible accounts by accumulating firm spending on intangibles into an estimated stock, using a capital accumulation equation, as is done for physical capital. In the research described below, we develop such estimates and compare them to the national accounts data to document and explore the role of intangibles. Figure 1 shows the rising share of intangibles in firm-level data and in the BEA aggregates, as a share of total capital.

The lack of physical presence means that intangibles may produce output differently than physical capital does. How does one use capital that lacks a physical presence? It must be represented or stored in some way, such as on paper or in a computer or server. But the information represented by the intangible can be used many times over — even simultaneously — without disrupting the original capital. This property — nonrivalry — makes it fundamentally different than physical capital. A machine tool cannot be used simultaneously in different factory locations. But a design blueprint, data, or software can. Nonrivalry gives rise to economies of scale and scope in intangibles that are not available to traditional physical capital.

This benefit has limits, however. The lack of physical presence also means that it can be harder to establish and protect ownership of intangibles. A machine tool can be locked in a factory or warehouse. Intangible capital, on the contrary, can be copied, often electronically or by word of mouth, by repeating ideas or data without ever taking physical possession, since it is not a physical asset. This inability to exclude other users erodes the value of the intangible, since it is hard to control its use exclusively. Hence, intangibles often have special protections through intellectual property rights, trademark laws, and noncompete clauses.

This shift toward intangibles among some of the fastest-growing industries in the economy prompted a closer look at the role of intangible capital in aggregate investment and industry dynamics. Many of these industries have also seen increasing concentration, which could arise from market power or from productivity advantages among leading firms. In work with Crouzet on the retail sector, where there has been a long-standing trend toward greater concentration, we found that weaker physical capital investment and rising concentration were associated with rising productivity.3 Moreover, this rising productivity was correlated with greater intangible investment, both over time and in subindustries.

We expanded on this theme in a paper for the Federal Reserve Bank of Kansas City’s Jackson Hole Economic Symposium, where we showed that accounting for intangible capital can account for up to two-thirds of the unexpectedly low physical capital investment in the US since 2000.4 Figure 3 shows the aggregate investment gap and the effect of controlling for intangible capital. Intangibles make up this gap in two ways. First, firms derive value from their entire capital stock, both physical and intangible. If intangibles generate value, then firm valuations, like Tobin’s q, will appear too high compared to physical capital alone. Hence, adding measures of intangible capital to the estimate fills the gap between firm value and physical capital investment. In addition, intangibles may result in higher productivity or market power. We find that the rising role of intangibles is most apparent in firms that lead their markets and increase their market share, and hence increase concentration. This shift is associated with higher productivity in some sectors, notably the consumer and retail sectors. However, evidence of rising market power is stronger in health care, which in our data is dominated by pharmaceutical and medical device firms.

These studies suggest that intangible capital can explain some of the puzzling trends in macro data since the 1990s. The slowdown in physical capital investment is less surprising when much of firm value, particularly in fast-growing sectors, is accounted for by intangible capital instead. In addition, some of the same sectors exhibit rising concentration. For some, leading firms thrive due to productivity advantages brought by intangible investments. For others, intangible capital may have brought productivity advantages, but leading firms also generate market power using patent protections, for example, to maintain the exclusivity of their intangibles, avert entry, and avoid competition.

Crouzet, Eisfeldt, Papanikolaou, and I show how these empirical observations can result from nonrivalry and excludability issues associated with intangibles.7 We allow for either partial or complete nonrivalry of intangible capital. The standard model of rival capital, such as the machine tools mentioned earlier, is a special case, but more generally, intangibles can also be used across multiple production streams, such as different locations or products. If intangibles are completely nonrival, this occurs without incurring any distortions or losses. To the extent that intangibles are partially nonrival, there is some deterioration associated with using them in multiple production streams. But with at least some nonrivalry, this feature gives rise to economies of scale or scope. Importantly, firms’ size and scope are complementary with nonrival intangibles: larger firms with a greater span of activity can use intangibles more effectively. This generates the productivity advantages of intangibles in leading firms that we observe in the data. We also allow for these advantages to be eroded if competitors imitate or copy the intangible once it is in use. This means that the ability to protect, or exclude, the intangible from use by other firms can protect market power and prevent entry. For example, a firm may have patent protection on an intangible and use it broadly across many locations while preventing other firms from using it.

These special properties of intangibles allow firms to essentially expand at will, at least in some dimensions. Jonathan Haskell, Paul Mizen, and I show that this turned out to be especially useful during the COVID-19 pandemic, when intangible capital played an important role in facilitating working from home.8 Many firms and employees had remote work capacity even before the pandemic, since some workers traveled or worked periodically from home. When the pandemic struck, workers and firms with this capability pivoted quickly to remote work, using preexisting connectivity and capacity. Our data show that the share of workers working from home rose from less than one-tenth to about a third of the workforce by May 2020. Across industries, the share of workers working remotely is highly correlated with preexisting intangible capital payments from 2019. [See Figure 5.] This relationship is consistent with the capacity of intangible capital to be deployed across the span of the firm. In this case, intangibles such as information and communications technology facilitated continued employment and operations far beyond previous usage. But since intangibles are nonrival, they could be applied throughout the firm immediately when the need arose. We estimate this to have roughly halved the impact of the pandemic on GDP at the trough, by allowing firms with work-from-home capability the resilience to keep employees on the job and to continue operating. 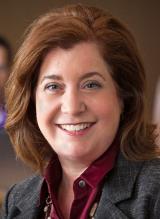 Janice Eberly is the James R. and Helen D. Russell Professor of Finance and a senior associate dean at the Kellogg School of Management at Northwestern University. Her research focuses on investment and its financing, including durable goods, portfolio and education choices by households and capital investments by firms. In recent work, she has studied intangible investment and its connection to innovation and rents. She is affiliated with the NBER’s Economic Fluctuations and Growth, Asset Pricing, and Monetary Economics Programs.

Eberly served as assistant secretary for economic policy and chief economist at the US Department of the Treasury in 2011–13. She received a Sloan Research Fellowship and is a fellow of the American Academy of Arts and Sciences. She has served as vice president of the American Economic Association and is currently coeditor of the Brookings Papers on Economic Activity and a nonresident senior fellow of the Brookings Institution. She received her PhD in economics from MIT.