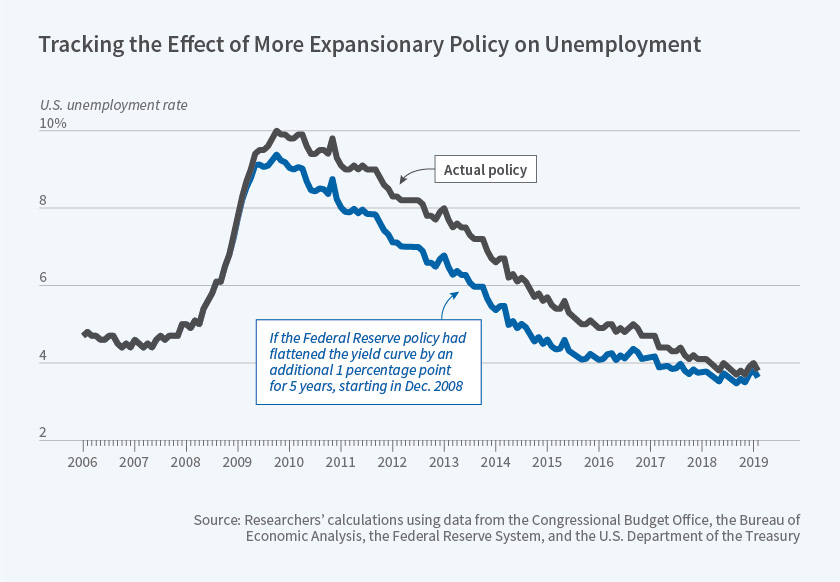 Without deployment of forward guidance and asset purchases by the Federal Reserve, recovery from the Great Recession would have been slower.

After the Federal Reserve effectively slashed interest rates to zero in response to the Great Recession, some doubted that there was much else it could do to accelerate the pace of recovery. The Fed pursued a range of unconventional monetary policy tools when faced with the “zero lower bound” (ZLB) on nominal short-term interest rates. These policies, which were designed to influence long-term rates by changing expectations of future short-term rates, included forward guidance, which Fed officials offer through announcements and summary projections, as well as transactions in the markets for long-term assets.  A new study suggests that these novel actions played an important role in the post-recession recovery.

In The Federal Re­serve’s Current Frame­work for Mone­tary Policy: A Review and Assessment (NBER Working Paper 26002), Janice C. Eberly, James H. Stock, and Jonathan H. Wright calculate that, absent unconventional monetary policies, the unemployment rate would not have returned to the Congressional Budget Office’s estimate of the natural rate until more than one year later than it actually did. (The natural rate of unemployment is the rate that is associated with job changing and labor turnover in an economy operating at full employment.) The researchers find that an expansion of unconventional policies to aggressively lower long-term interest rates early in a crisis would reduce the peak unemployment rate and also hasten the recovery, as shown in the figure. They also find that the rate of inflation would have been approximately 0.2 percentage points lower than it was during the latter part of the recovery if the Fed had not adopted unconventional policy steps.

The researchers also estimate the effect of changes in the federal funds rate, the traditional monetary policy tool, on economic outcomes. They find that when such policy actions are not constrained by the ZLB, they have substantial effects. For example, Fed policies would have been much more effective if interest rates and inflation had been higher before the recession, leaving more headroom to lower rates during the crisis. Had the economy entered the recession with the short-term interest rate and inflation 1 percentage point higher than they actually were, the economy would have recovered faster and the unemployment rate would have dropped to the natural rate seven quarters earlier than it actually did.

On the other hand, deploying these policies later, during the recovery, has less impact. If the Fed had delayed its increase in interest rates during the recovery by one year, waiting until late 2016 instead of late 2015, the estimates suggest that the effect on the unemployment and inflation rates in late 2016 would have been negligible.

The Federal Reserve’s Current Framework for Monetary Policy: A Review and Assessment