Taxes and International Mobility of Talent

Tax-induced international mobility of talent is a controversial public policy issue, especially when tax rates differ substantially across countries and migration barriers are low as in the case of the European Union. High top tax rates may induce top earners to migrate to countries where the tax burden is lower, thereby limiting the redistributive power of governments by creating tax competition. Such concerns have featured prominently in recent tax policy debates in Europe, including the introduction of the 50 percent top marginal tax rate in the United Kingdom in 2010 (reduced to 45 percent in 2013) and a temporary 75 percent top marginal tax rate on labor income in France in 2013-14. Furthermore, the introduction in many European countries of preferential tax schemes for high-skilled foreign immigrants represents prima facie evidence of tax competition in internationally integrated labor markets. Preferential tax schemes for high-skilled foreign workers have been introduced in Belgium, Denmark, Finland, the Netherlands, Portugal, Spain, Sweden, and Switzerland. A summary of all such existing schemes in OECD countries is provided by OECD. 1 The key empirical question is how international migration by high-skilled workers responds to tax differentials across countries.

An enormous body of empirical literature has studied the effect of taxation on labor supply, earnings, and reported income for tax purposes within countries. In our 2009 study, Joel Slemrod, Seth Giertz and I review the large recent literature on the effects of marginal tax rates on reported income. 2 However, there is almost no empirical work on the effect of taxation on the mobility of workers across countries. In two recent studies, we investigate the importance of tax-induced migration effects among top earners.

Evidence from the European Football Market

In our 2010 paper, Henrik Kleven, Camille Landais, and I study whether top tax rates affect the international mobility of football players in Europe. 3 International mobility among football players has recently been the subject of heated discussion in the United Kingdom in connection with the increase in the top marginal tax rate from 40 percent to 50 percent. Supposedly, the star player Cristiano Ronaldo moved from Manchester United to Real Madrid in 2009 partly to avoid the announced 50 percent tax in the United Kingdom and to benefit instead from the so-called "Beckham Law" in Spain, a preferential tax scheme offering a flat tax of 24 percent to foreign residents. The nickname for this tax scheme was coined a few years earlier when another star player, David Beckham, also moved from Manchester United to Real Madrid to benefit from the scheme. Arsène Wenger, the emblematic manager of Arsenal Football Club, commented on the U.K. tax reform by saying that "with the new taxation system, (...), the domination of the Premier League will go, that is for sure."4

The football market offers three important advantages for the study of mobility. First, international mobility has been very common in the professional football market since the Bosman ruling by the European Court of Justice in 1995 that lifted pre-existing restrictions on player mobility. In the absence of such restrictions, cross-border mobility is higher in the football market than in most other markets owing to the fact that the game is the same everywhere and involves very little country-specific human capital. This makes the football market a valuable laboratory to begin the study of tax-induced mobility across countries. Football players may provide an upper bound on the migration response to taxation for the labor market as a whole. Obtaining an upper bound is crucial for gauging the potential importance of this policy question, especially in the long run as labor markets become more international and country-specific human capital declines in importance.

Second, extensive data on the careers and mobility of professional football players can be gathered for most countries over long time periods. For this project, we have gathered exhaustive data on the career paths of all first-league football players for 14 European Union countries over the past 30 years, as well as performance data for all first-league teams.

Third, and most importantly, there are many sources of variation in tax policy which can be exploited to identify the causal effect of taxation on mobility in the football market. In particular, a number of countries have experimented with special tax schemes offering substantially lower tax rates to immigrant football players, including Denmark (1991), Belgium (2002), and Spain (2004). An analysis of these tax schemes produces convincing evidence that international mobility patterns do indeed respond to taxation. For example, when Spain introduced the Beckham Law in 2004, the fraction of foreigners in the Spanish league immediately and sharply started to diverge from the fraction of foreigners in the comparable Italian league. Moreover, exploiting the specific eligibility rules in the Beckham Law, we show that the extra influx of foreigners in Spain is driven entirely by players eligible for the scheme with no effect on ineligible players.

Combining the evidence from tax reforms in all 14 European countries in our sample, we find that the location decisions of players are very responsive to tax rates. But because labor demand by football clubs is relatively rigid—there can only be so many players in a club and only so many clubs in each national league—we also find strong evidence of sorting effects. Top-quality players are much more responsive than lower-quality players. In fact, we find that tax cuts to foreigners in a given country attract top-quality foreign players, but crowd out lower-quality foreign players as well as some domestic players.

With Kleven, Landais, and Esben Anton Schultz in 2013, I study quasi-experimental variation created by a Danish preferential tax scheme for high-earning immigrants enacted in 1992. 5 Under this scheme, the tax rate on labor earnings is reduced to a flat rate of about 30 percent for a period of up to three years. Eligibility for the scheme requires annualized earnings above a threshold (indexed to average earnings growth and equal to about 100,000 euros in 2009), corresponding roughly to the 99th percentile of the distribution of individual earnings in Denmark. This scheme is much more generous than the Danish regular tax system, which imposes a top marginal tax rate of about 62 percent above 47,000 euros (as of 2009). Absent the special tax scheme, workers with earnings above the scheme threshold would face average income tax rates of around 55 percent, about twice as high as the scheme rate. At the end of the three years of preferential tax treatment, the taxpayer becomes subject to the ordinary Danish tax schedule on subsequent earnings.

We find striking evidence that the scheme had a very large effect on the number of highly paid foreigners in Denmark. Figure 1 summarizes our results. It shows that the number of foreigners in Denmark above the eligibility threshold, the group affected by the tax scheme, doubles after the scheme is introduced relative to the number of foreigners slightly below the threshold. The latter represents a comparison group not affected by the tax scheme. This effect builds up in the first five years of the scheme and remains stable afterward. As a result, the fraction of foreigners in the top one-half of 1 percent of the earnings distribution is 7.5 percent in recent years compared to a 4 percent counterfactual absent the scheme. This very large behavioral response implies that the revenue-maximizing tax rate for a scheme targeting highly paid foreigners is relatively small, about 35 percent. This corresponds roughly to the current tax rate on foreigners in Denmark under the scheme once we account for other relevant taxes, such as value-added taxes (VAT) and excises. Importantly, the revenue-maximizing tax rate on natives is much higher because the response of migration with respect to the net-of-tax rate among expatriate natives is very small. In other words, highly skilled expatriates, who would be eligible for the scheme if they haven’t been in Denmark for three years, do come back more because of the scheme. 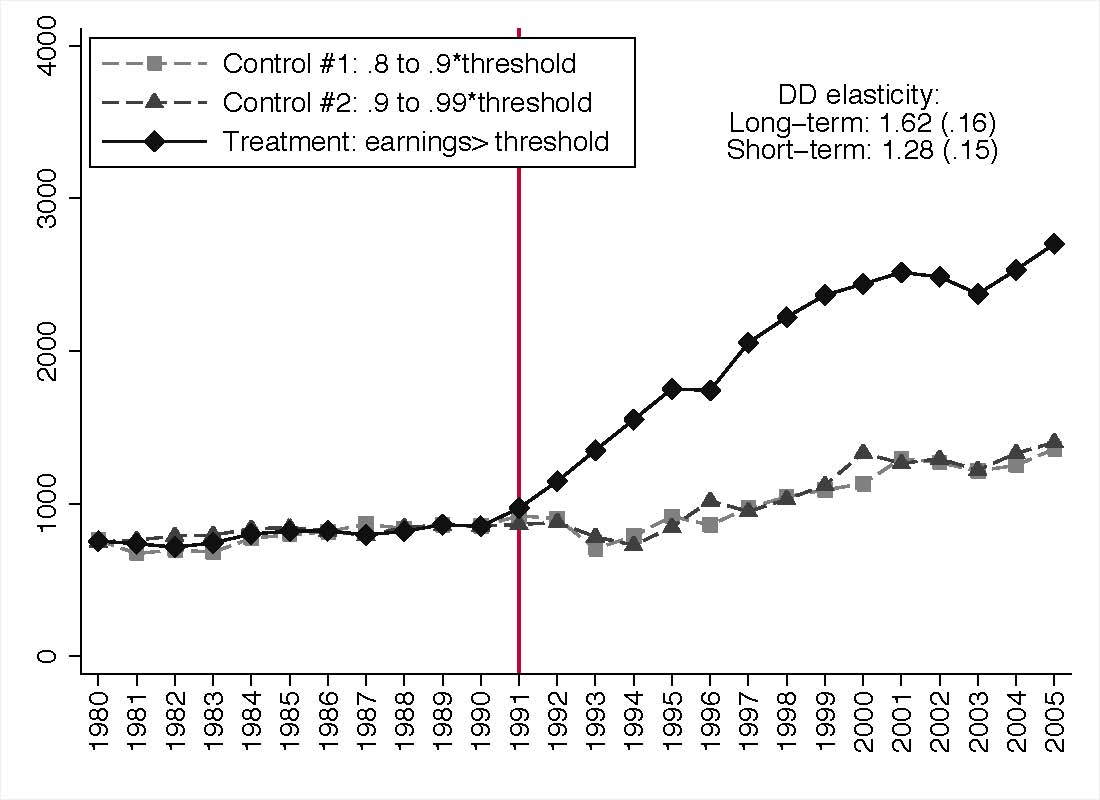 It can therefore be desirable from a single-country revenue perspective to adopt such preferential schemes targeting highly paid foreigners. At the same time, these schemes impose negative fiscal externalities on other countries by reducing their capacity to collect taxes from top earners. This tension between country welfare and global welfare in the design of individual income tax policy has loomed large in the debate about tax competition for a long time, but our paper provides the first compelling evidence that this is indeed a major empirical issue. Absent international tax coordination, preferential tax schemes to high-income foreigners could substantially weaken tax progressivity at the top of the distribution. International policy coordination and the design of rules regulating such special schemes in the European Union is therefore likely to be an important part of the European Union policy debate in coming years.

Emmanuel Saez is a Research Associate in the NBER's Programs on Public Economics and Economic Fluctuations and Growth, and a Professor of Economics and Director of the Center for Equitable Growth at the University of California, Berkeley. His research focuses on tax policy and inequality both from theoretical and empirical perspectives. Jointly with Thomas Piketty, he has constructed long-run historical series of income inequality in the United States that have been widely discussed in the public debate. He received his Ph.D. in Economics from MIT in 1999. He was awarded the John Bates Clark Medal of the American Economic Association in 2009 and a MacArthur Fellowship in 2010. He became an NBER Faculty Research Fellow in 1999, and has been a Research Associate since 2003.