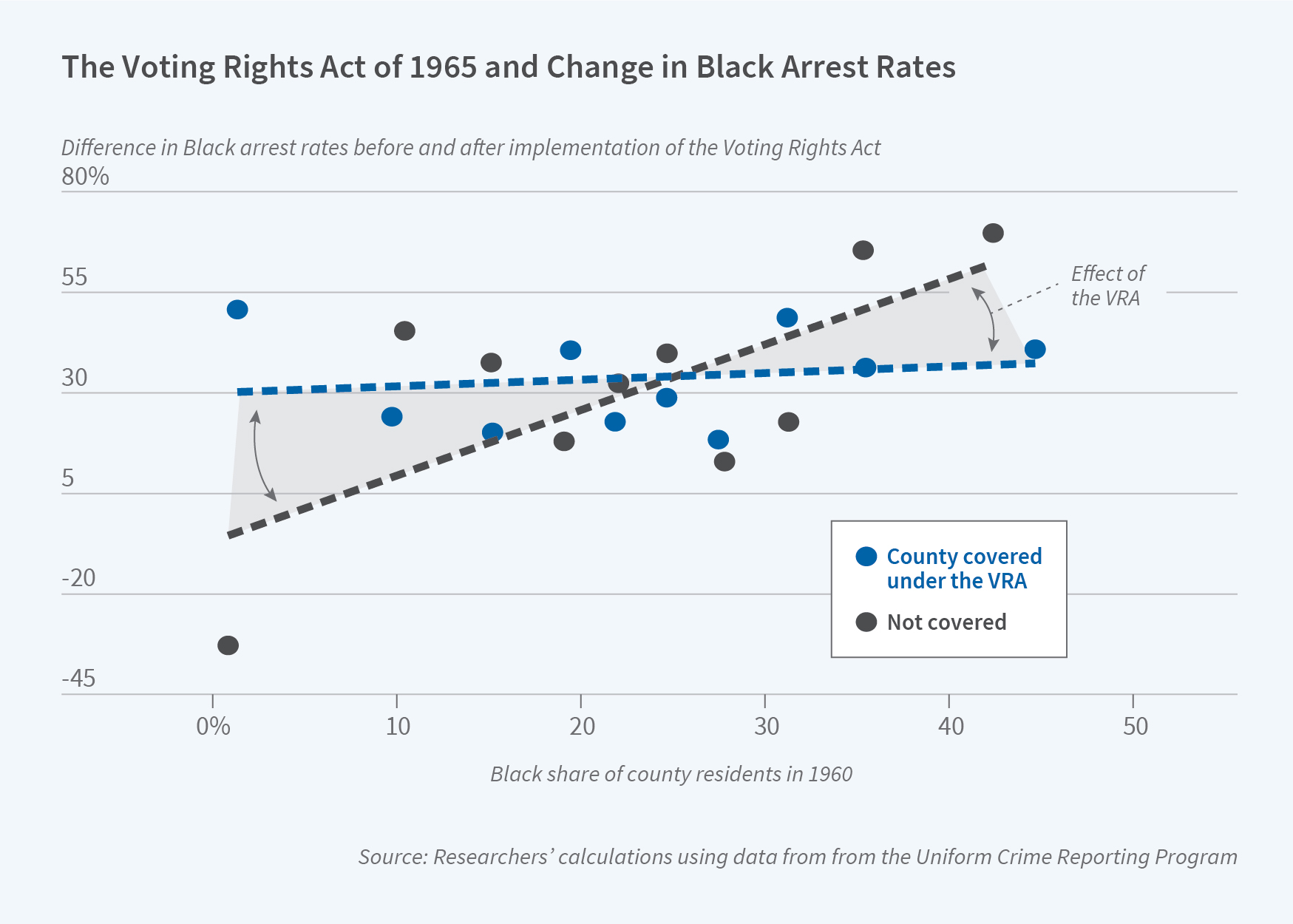 Arrest rates for Blacks fell in counties that were both covered by the VRA and had a high concentration of Black residents, relative to other counties.

The 1965 Voting Rights Act (VRA) protected the voting rights of minority voters and effectively expanded the franchise, particularly in counties that were identified as “covered” under the law. In The Franchise, Policing, and Race: Evidence from Arrests Data and the Voting Rights Act (NBER Working Paper 27463), Giovanni Facchini, Brian G. Knight, and Cecilia Testa find that following passage of the VRA, Black arrest rates fell in counties that were covered by the legislation, had a large number of newly enfranchised Black voters, and had elected chief law enforcement officers (CLEOs).

Many CLEOs in the United States — including all sheriffs and some municipal police chiefs in the South, the region most affected by the VRA — are directly elected, rather than appointed. CLEOs are in charge of policing practices that have direct effects on the treatment of minorities and might also, through their leadership, be able to influence departmental culture.

To empirically investigate whether there were links between minority voting, elected government officials, and police treatment of minority groups, the researchers exploit the dramatic changes wrought by the VRA, which compelled a group of mostly Southern jurisdictions to remove restrictions on voting, and required federal authorization for any changes to their voting laws. As a result, previously disenfranchised Black voters in former Confederate states fully covered by the VRA in 1965 — Alabama, Georgia, Louisiana, Mississippi, South Carolina, and Virginia — along with those in 39 counties in North Carolina, became able to cast their ballots freely and thus potentially influence the election of officials, including CLEOs. The researchers compare the outcomes in these counties with those in other locations — Arkansas, Florida, Tennessee, Texas, and 61 counties in North Carolina — that were not covered by the VRA.

The researchers examined data on arrest patterns by race from the FBI’s Uniform Crime Reports. They studied the averages over the 1960–1965 and the 1975–1980 periods to create pre- and post-VRA arrest measures. Their baseline analysis compared arrest patterns along four dimensions: for Blacks versus Whites; before and after the passage of the VRA; areas covered by the VRA versus non-covered areas; and counties with significant Black populations, which were more impacted by the VRA, versus counties with fewer Black residents.

Before the introduction of the VRA, the overall average arrest rate was 6.29 per thousand for Blacks, whereas the corresponding figure for Whites was 1.99. After the passage of the VRA, the number of arrests slightly increased for Blacks, reaching on average 6.59 per thousand, and nearly doubled for Whites, averaging 3.07 per thousand. Further analysis revealed that arrest rates for Blacks fell in counties that were both covered by the VRA and had a high concentration of Black residents, with no corresponding patterns in White arrest rates. Arrests of Blacks by municipal police fell in counties that were covered by the VRA, had a high concentration of Black residents, and had elected police chiefs.

The researchers could not explain their findings with differences in collective bargaining, changes in underlying propensity to commit crimes, responses to changes in policing practices, or changes in the suppression of civil rights protests. They conclude that by increasing the accountability of CLEOs to the Black electorate, the VRA led to changes in police behavior and changes in patterns of arrests.

The Franchise, Policing, and Race: Evidence from Arrests Data and the Voting Rights Act