Common Application Has Had Wide-Ranging Effects on College Admissions 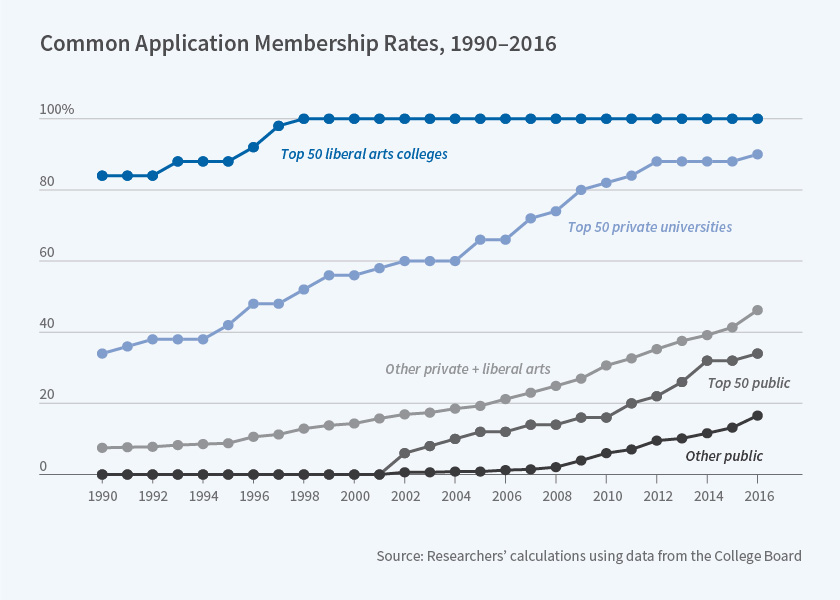 After they join the program, colleges experience a 10 percent jump in the number of applications for admission; over a decade, that growth rises to 25 percent.

The rapid expansion of a program enabling students to fill out a single application when applying to multiple colleges and universities has enabled participating institutions to enroll a larger percentage of out-of-state and foreign students as well as more freshmen who excelled on standardized tests.

The platform was launched in 1975 with just 15 colleges; today, it includes more than 700 institutions that together annually receive 4 million applications from 1 million students. The founding colleges were selective liberal arts colleges. The program has grown to include public universities, with more-selective institutions joining at a much more rapid clip than their less-selective counterparts.

Using the Common Application makes it simpler and less time-consuming for students to apply to multiple colleges and it exposes them to a geographically broader range of institutions.

The researchers find that in the years right after they join the program, colleges experience a 10 percent jump in the number of applications for admission. Ten years after joining, the effect is 25 percent. They attribute the sustained and accelerating pace of increase to the snowball effect of increasing participation and the rapid growth of the internet.

As the Common App has become more widely used, institutions have seen the fraction of accepted students choosing to go elsewhere increase, presumably because these students have applied to more colleges and received more competing offers of admission. This effect on colleges, however, is more than offset by the increase in applications. Schools that joined the Common App also slightly increased their enrollment on average, either because they were previously below capacity or because they elected to expand.

The study finds some evidence that the Common Application program has increased freshman SAT scores at participating institutions. Before the program became widespread, some higher-achieving students may have restricted their search to local schools, even if they were less selective. Given that highly selective schools make up a disproportionate share of schools in the application program, the increase in SAT scores has widened the gap in the academic ability between students at less-selective and more-selective schools. The researchers conclude that, by streamlining the application process, the Common Application has created a more robust academic marketplace.

Reducing Frictions in College Admissions: Evidence from the Common Application