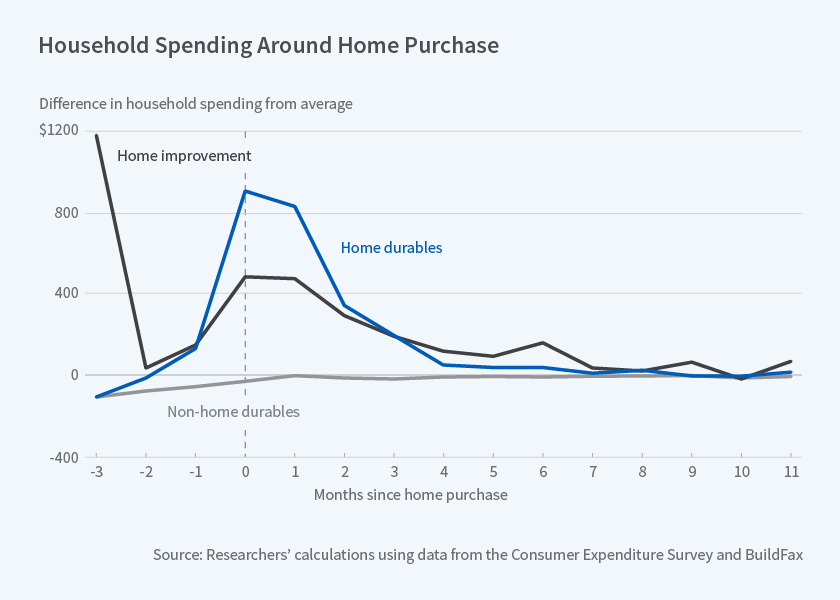 When home sales plunged by almost 50 percent during the Great Recession, spending on home-related durable goods and home improvements declined by 12 percent and 28 percent, respectively.

Economists have long recognized that household spending rises and falls with booms and busts in the housing market. Most research on this topic has focused on ways in which spending is affected by changes in housing wealth and by employment changes linked to housing construction. In Making the House a Home: The Stimulative Effects of Home Purchases on Consumption and Investment (NBER Working Paper No. 23570), Efraim Benmelech, Adam Guren, and Brian T. Melzer explore the direct effects of moving to a new home on household spending. They label this the "home purchase channel" for consumer spending.

The researchers theorize that in the months preceding and following the purchase of a new home, buyers are apt to increase their spending on home-related durables and home improvement projects in order to customize their new space. New homeowners buy curtains and light fixtures, renovate kitchens and bathrooms. The researchers assume that these purchases and investments are frequently non-transferable, meaning that they must be repeated with every new home purchase. This implies that household spending should increase in housing markets characterized by high numbers of transactions, and decrease in slower, or stagnant, markets.

Analyzing data on household spending from the Consumer Expenditure Survey and data on construction permitting activity from BuildFax, the researchers find that home buyers between 2001 and 2013 spent about $3,700 more in the months surrounding a home purchase, and that this spending was concentrated in home-related goods and home improvements. The effects were more pronounced for owner-occupiers than for renters. Owners spent $5,900 more on home-related goods and improvements in the period encompassing the three months prior to and the year after a home purchase. These spending increases are especially pronounced in the first quarter after a home purchase, and they remain slightly higher for six to nine months. The researchers did not find concurrent increases in spending on non-home-related goods.

Making the House a Home: The Stimulative Effect of Home Purchases on Consumption and Investment