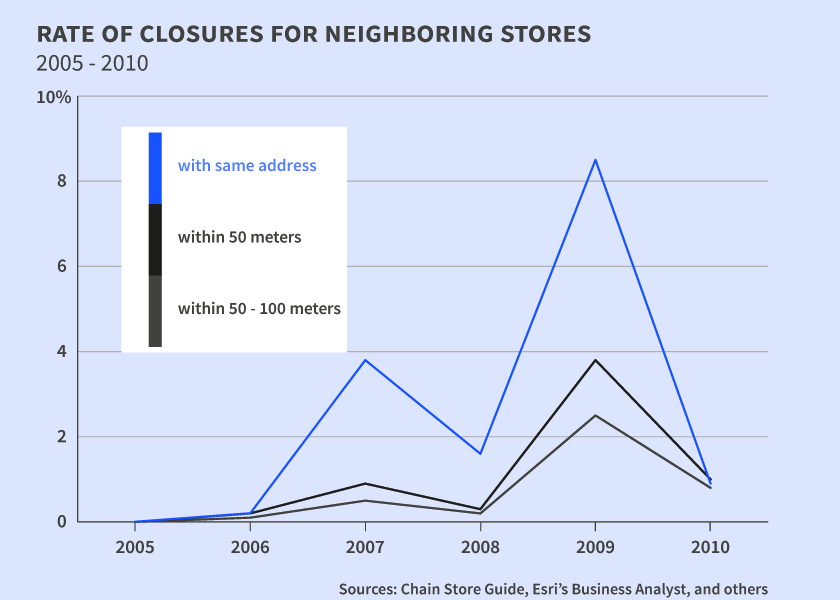 Economists have long studied how a vibrant cluster of businesses can act as a catalyst for regional growth, attracting other firms to a geographic area and bolstering economic benefits enjoyed by all nearby companies. But in The Agglomeration of Bankruptcy (NBER Working Paper No. 20254), Efraim Benmelech, Nittai Bergman, Anna Milanez, and Vladimir Mukharlyamov explore how such economic clusters can act as double-edged swords and how the bankruptcy of a major "anchor tenant" at a shopping mall can have negative spill-over effects on other nearby companies. In the process, the authors say their findings identify a new channel through which bankruptcies by companies can drag down the performance of others.

Previous studies have documented how bankruptcies impact firms that file for Chapter 11 and their prospects for survival if they emerge from bankruptcies but less is known about the negative externalities that bankrupt companies impose on their competitors. In this paper, the authors wanted to explore whether agglomerations, in the case of retail clusters, can actually be detrimental during economic downturns, intensifying negative pressures on others when a major retail tenant files for Chapter 11 and closes stores, thus reducing the overall attractiveness of a retail cluster to customers.

Based on 2005-2010 data, the authors compiled information from Chain Store Guide, Esri's Business Analyst, and other sources about the locations of hundreds of thousands of retail outlets, including major national retailers, and scores of bankruptcy filings that led to liquidations. The study focused on bankruptcies of national chains with widespread brand recognition and geographic reach, such as Circuit City, KB Toys, Linens 'n Things, and G+G Retail. The geographic diversity of national chains diminished the possibility that specific regional economic conditions might account for hardships and closures suffered by various stores.

The authors found that stores of non-bankrupt firms that were exposed to stores of bankrupt retailers were more likely than non-exposed stores to close. Indeed, this spillover effect was stronger for companies in the same retail industry as the liquidating chain store. The authors calculate that it is twice as likely for stores to close within a year after national-chain liquidations if those stores are within the same retail industry.

In addition, the authors show that economic pressures are more intense on neighboring stores if they are smaller and operated by firms in poor financial health. Stores within a 50-meter radius of a closing national store are 16.9 to 22.2 percent more likely to close if their parent firm is in the 25th percentile of profitability compared to others. By comparison, firms in the 75th percentile of profitability show no statistically significant likelihood of closing.

"Our analysis shows that bankrupt firms impose negative externalities on non-bankrupt neighboring firms through the weakening of retail agglomeration economies," the authors conclude. "Store closures naturally lead to reduced attractiveness of retail areas as customers prefer to shop in areas with full occupancy. This, in turn, leads to declines in demand for retail services in the vicinity of bankrupt stores, causing contagion from financially distressed companies to stores of non-bankrupt firms."

The Agglomeration of Bankruptcy