Real Effects of Liquidity during the Financial Crisis 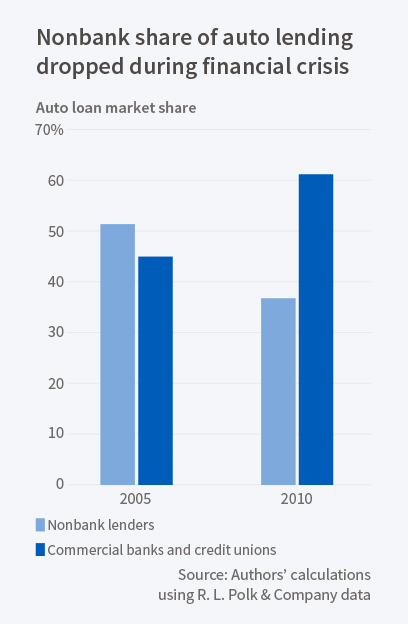 A run in the asset-backed commercial paper market in 2008 contributed to the collapse of car sales in 2009.

U.S. car sales have long depended on the existence of nonbank lenders, particularly the financing arms of car manufacturers. These lenders, who specialize in cars and car buyers, have been much better equipped than banks to gauge the risk of individual car loans and more willing to accept purchased cars as collateral. In 2005, loans from nonbank lenders funded more than half of U.S. car sales.

These nonbank lenders are more vulnerable to economic downturns than banks. While banks can fund loans from FDIC-insured deposits, nonbank lenders rely on short-term credit markets for funding, principally the asset-backed commercial paper (ABCP) market. In 2008, buyers of short-term debt left the ABCP market en masse. This resulted in the devaluation of the assets the nonbank lenders could sell to cover their losses, and it rendered those lenders unable to extend credit to car buyers. Several of these lenders collapsed, including General Motors Acceptance Corporation (GMAC), one of the world's largest providers of auto financing. Car sales fell sharply in 2009, and GM and Chrysler filed for bankruptcy.

In The Real Effects of Liquidity During the Financial Crisis: Evidence from Automobiles (NBER Working Paper 22148), Efraim Benmelech, Ralf R. Meisenzahl, and Rodney Ramcharan find that illiquidity in the ABCP market was responsible for about one third of the dramatic drop in car sales in 2009.

To estimate linkage between the ABCP market and car sales, the researchers used two data sets. The first, a proprietary data set from R. L. Polk & Company of all new-car sales in the U.S. from 2002 onward, listed the financing source and institution, vehicle make and model, and county of registration for each sale. Because the Polk data set contained no information on borrower characteristics, the researchers also used an Equifax data set of three million borrowers that included each borrower's age, detailed credit history information, and data on whether a borrower's car loan came from a bank or a nonbank lender.

Comparing car sales across counties as the financial crisis unfolded, they found that car sales fell more sharply in counties where nonbank car loans were more prevalent. "In particular," they report, "a one standard deviation increase in nonbank dependence is associated with a 1 percentage point or 0.08 standard deviation decline in the growth in new car transactions over the 2008-2009 period."

Car sales also fell in 2009 because job losses, devaluation of homes and other assets, and reductions in credit-card limits made it difficult for buyers to afford new cars. Those most likely to be hard-hit by the recession were lower-credit-quality borrowers who were most likely to obtain their car loans from nonbank lenders. In their analysis, the researchers controlled for house price, household leverage, net worth, unemployment, FICO scores, and home-ownership status, as well as for different models of cars sold at different price points. Including these controls did not attenuate the estimated effect of the ABCP market on car sales. Moreover, at the county level, the researchers found no association between mortgages or revolving lines of credit and auto sales.

The Real Effects of Liquidity During the Financial Crisis: Evidence from Automobiles