Overlapping Nursing Home Staff and the Spread of COVID-19 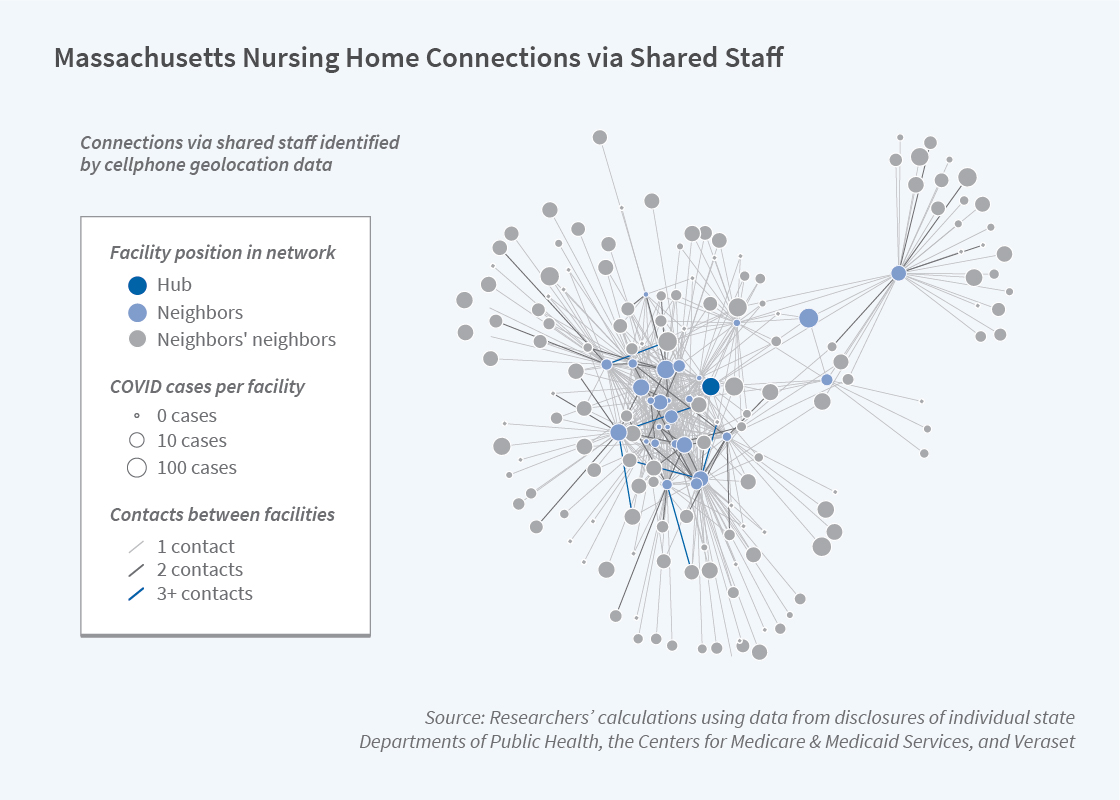 After lockdown, staff and contract workers were the only nonresidents allowed into nursing homes. Those who worked in multiple facilities inadvertently enabled the virus to spread.

Nursing homes with staff who work at multiple facilities were more likely to experience outbreaks of COVID-19 than those without such links. Eliminating staff overlap among nursing homes could have reduced coronavirus cases in nursing homes by 44 percent, according to Nursing Home Staff Networks and COVID-19 (NBER Working Paper 27608) by M. Keith Chen, Judith A. Chevalier, and Elisa F. Long.

The researchers analyze geolocation data from more than 30 million US smartphones. They find that of the nearly 510,000 phones that were observed to visit at least one nursing home over the six-week period after March 13, when a nationwide lockdown on nursing homes went into effect, about 7 percent were observed in at least two facilities. They infer that these were most likely staff members or contract workers, the only nonresidents allowed in nursing homes after the lockdown. Because resident numbers and health conditions fluctuate, nursing homes often rely on temporary nurses and nursing aides to meet staffing needs. In addition, nursing assistants — whose median pay is under $30,000 — in some cases work two jobs to make ends meet.

Controlling for location, demographic factors, and nursing home characteristics, the research finds a strong correlation between COVID-19 infections and the extent to which a nursing home was visited by people who had been to other facilities.

The typical nursing home shared at least one smartphone connection with an average of 14.3 other homes. The degree of connectedness varied widely among states, averaging below two connections in Montana, South Dakota, Vermont, and Wyoming and exceeding 20 in Florida, Illinois, Maryland, New Jersey, and Texas. Homes with no documented cases of COVID-19 had an average of 11.8 connections, compared with 17.3 for homes with confirmed or suspected cases.

The first serious outbreak in the United States, which occurred in Washington state in February, illustrates the role of connections in promoting disease spread. The Centers for Disease Control and Prevention cited roving workers as having enabled the rapid spread of the virus from the Life Care Center of Kirkland, Washington, to other nursing homes in the state.

The researchers calculate the strength of connections among nursing homes by tallying the total number of smartphones appearing in a given nursing home and in one of its neighbors. By that measure, COVID-positive homes registered an average strength of 23.7 compared with 16.4 in disease-free homes. They also point out, however, that the number of connections alone can be misleading. A home could have just one connection and still be vulnerable, should that other facility have a high rate of infection and/or links to other highly infected homes.

The study notes that while the nursing home population is particularly vulnerable to the virus, these findings could be relevant to other congregate settings such as assisted-living facilities, prisons, food-processing plants, and other close-quarter working environments.