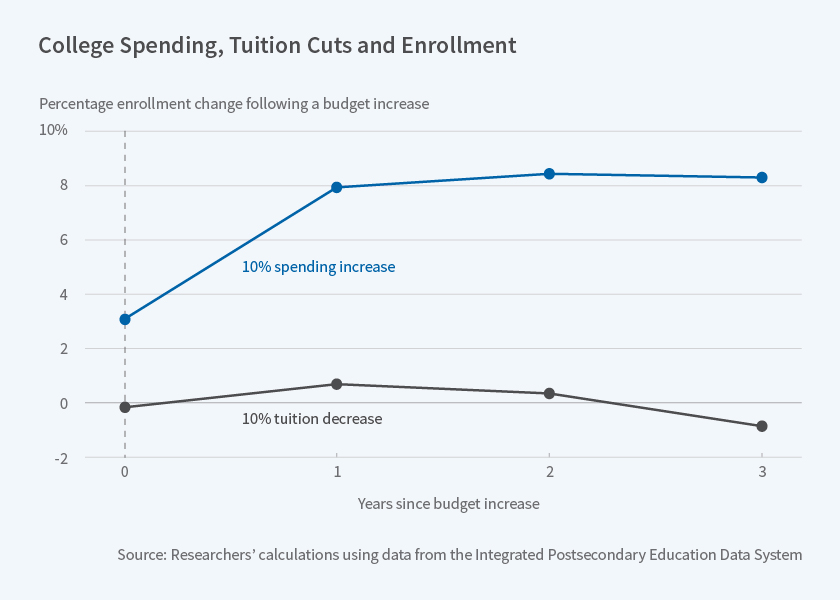 Decreasing student costs by reducing tuition does not increase postsecondary attainment, but improving schools' quality and capacity does.

Despite rapid growth in federal spending to support postsecondary education, the proportion of the U.S. population completing two- or four-year colleges has grown slowly in recent decades. In The Impact of Price Caps and Spending Cuts on U.S. Postsecondary Attainment (NBER Working Paper No. 23736), David J. Deming and Christopher R. Walters note that nearly all federal programs are designed to lower the price individual students pay for a college education, and they ask whether lowering prices or increasing spending has a bigger impact on college enrollment and completion. Based on data from 1990 through 2013, they conclude that tuition changes have only modest effects on enrollment and degree completion in U.S. public postsecondary institutions. They conclude that direct financial subsidies for these institutions might be more effective than tuition reductions if the goal is to increase degree completion. The researchers note that their results are mostly driven by variations in tuition and spending at non-selective public institutions, where per capita spending is relatively low and student amenities are limited.

The researchers find that reducing the price of higher education through tuition cuts has no discernable effect on enrollment, while a 10 percent increase in institutional spending increases enrollment by 3 percent. They analyze data from the Integrated Postsecondary Education Data System and a newly constructed data source on state tuition caps and freezes imposed by state legislatures.

There are important differences across states, and within states over time, in financial support for postsecondary education. In California, inflation-adjusted per capita state government appropriations for higher education rose from about $5,000 in 1990 to $6,000 in the early 2000s, then fell to less than $4,000 in 2013. In Texas, inflation-adjusted per capita spending was steady at about $4,000. Standard data from the Bureau of Labor Statistics and the Bureau of the Census are used to control for state and county economic and demographic differences. The estimates imply that the marginal cost of producing an additional bachelor's degree ranges from $102,532 to $155,451.

States can support postsecondary education by lowering the price students face, with tuition support or scholarships, or by funding colleges directly and allowing the institutions to spend the money as they see fit. The researchers find that increased institutional spending leads to higher persistence of students — those who enroll are more likely to stay — and to greater degree completion among enrolled students.

In recent years, informal capacity constraints have been reported in many public institutions. The researchers note that "reduced course offerings, long waitlists, little or no student guidance, and larger class sizes" all make it harder to complete a degree. They report that schools spend about 40 cents of every additional dollar of funding on instructional spending and academic support, and argue that this increased spending may enable schools to reduce informal capacity constraints.

There is some evidence that increased spending by public postsecondary schools crowds out enrollment in private institutions providing associate degrees, but no evidence that it has any effect on four-year degrees. The researchers conclude that "government programs aimed at reducing college costs will not increase degree attainment if cost reduction is achieved by reducing per-student spending" because "spending cuts affect core instruction and academic support, generating large downstream impacts on educational attainment."

The Impact of Price Caps and Spending Cuts on U.S. Postsecondary Attainment