Spare the Suspensions, Spoil the Child? Maybe the Reverse Is True 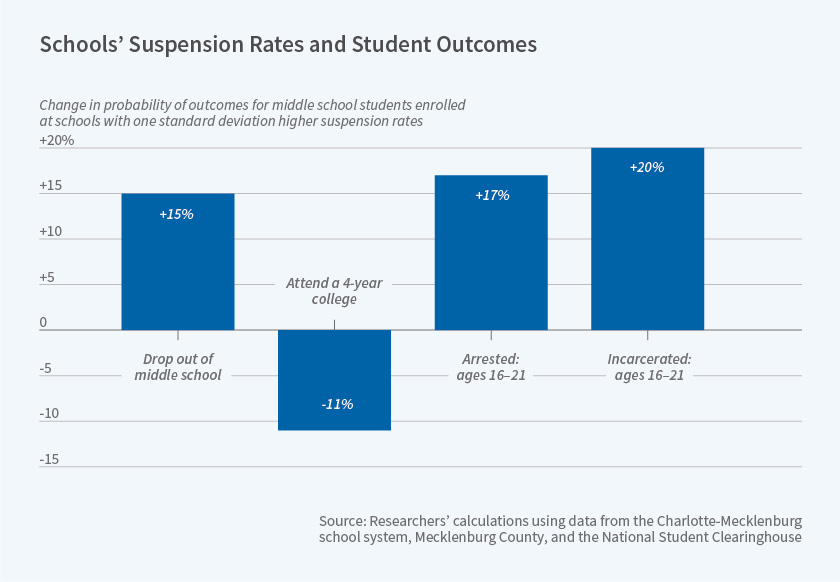 Early educational experiences can affect adult criminality, but little is known about the channels through which these effects occur. In The School to Prison Pipeline: Long-Run Impacts of School Suspensions on Adult Crime (NBER Working Paper 26257), Andrew Bacher-Hicks, Stephen B. Billings, and David J. Deming explore one potential channel: school disciplinary policies.

The researchers exploit an exogenous source of variation in school attendance — the 2002 court-ordered redrawing of school attendance boundaries in Charlotte-Mecklenburg Schools (CMS), a district in North Carolina — to study how disciplinary policies affect later-life outcomes. The court action prohibited use of race in student assignments, requiring that assignments be based only on school capacity and the geographical concentration of students around a school. As a result, approximately half of CMS students changed schools. In the full sample of CMS students, the researchers calculate that 23 percent of students were suspended at least once per year; 19 percent were arrested at least once between the ages of 16 and 21. Principals in the CMS district have significant discretion with respect to disciplinary policy, and school suspension rates reflect this discretion: Some CMS schools had substantially higher suspension rates than others.

To assess how stricter disciplinary policies affect student outcomes, the researchers compare middle school-aged students who lived near each other, previously attended the same schools, and were sent to different schools after the 2002 redrawing of school boundaries. They find that students who were transferred to stricter schools — schools that had higher suspension rates — were much more likely to be suspended after their transfer than their peers who attended less-strict schools. Students at the stricter schools were 7 percent more likely to be suspended and were suspended for 16 percent more days.

The results for the full sample mask considerable heterogeneity — strict disciplinary policies were especially detrimental for male students who were minorities. Assignment to a stricter school increased the number of per-year days of suspension by 0.43 days for minority students, an effect twice as large as that for white students. The effects on arrest and incarceration rates were also higher for minority students, especially males.

The School to Prison Pipeline: Long-Run Impacts of School Suspensions on Adult Crime