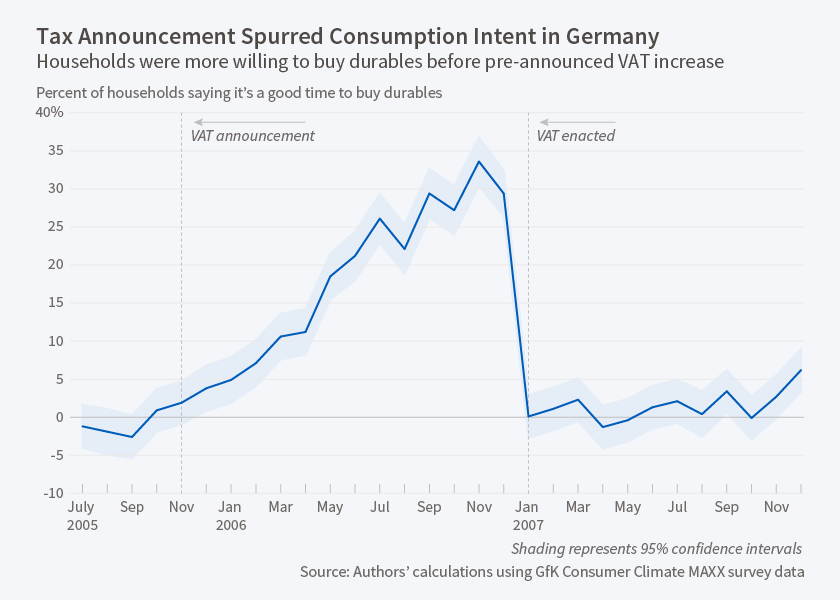 German consumers' reaction to announcement of a future hike in the value-added tax suggests such announcements could be used to spur buying of durables.

In November 2005, the German government announced plans to increase its value-added tax (VAT) from 16 percent to 19 percent in January 2007. The increase was imposed to bring Germany's deficit in line with European Union rules.

In The Effect of Unconventional Fiscal Policy on Consumption Expenditure (NBER Working Paper 22563), Francesco D'Acunto, Daniel Hoang, and Michael Weber report that between the VAT increase announcement and the time the increase took effect, German households increased their reported willingness to purchase durable goods by 34 percent relative to other European households. The researchers conclude that because household willingness to buy durable goods increases when people expect future price increases, pre-announced increases in consumption taxes can raise consumption expenditure. They call this an example of "unconventional fiscal policy."

The researchers' estimates are based on data from the GfK Consumer Climate MAXX survey, which contacts a representative sample of 2,000 German households each month to measure expectations about business-cycle conditions. Similar surveys are administered in France, Sweden, and the United Kingdom. From January 2000 to December 2013, the correlation between expectations about price increases and the readiness to spend on durable goods was 0.59. On average over the whole sample in all years, about 20 percent of households said it was a good time to buy durables, while 24 percent said it was a bad time. Most households reported that their financial situation had not changed in the previous year and that they did not expect a future change. The researchers found that households expecting higher prices were eight percent more likely to report that it was a good time to buy durable goods than households that did not expect price increases.

There was no difference in reported readiness to spend on durable goods between German households and similar households in other countries before the VAT increase announcement. After the announcement, German households were 3.8 percent more likely to report that it was a good time to purchase durable goods. The effect increased throughout 2006, peaked at 34 percent in November 2006, and returned to roughly the pre-announcement level after the VAT increase took effect in January 2007. A "back-of-the-envelope calculation suggests the 3 percentage point increase in VAT resulted in 10.3 percent higher real durable consumption growth," the researchers write.

The Effect of Unconventional Fiscal Policy on Consumption Expenditure